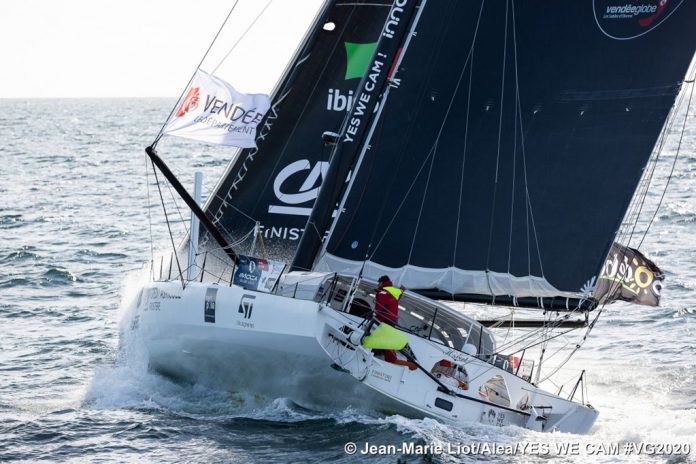 Mischievous, amusing, sardonic, French veteran Jean Le Cam continues to light up the leading pack of the Vendée Globe who are slogging south-westward, beam reaching into choppy, slamming seas. Alex Thomson continues to lead the 32 boat fleet by about 10 miles at some 110 miles north east of Recife, Brazil.

But for all that the 61 year old Le Cam, who is on his fifth Vendée Globe race,  played with Vendée Globe LIVE! viewers’ minds today – altering his virtual backdrop to place himself in an empty café bar – the undeniable reality is Le Cam is still showing a posse of younger, fast foiling IMOCA boats and their much younger skippers, the way down the South Atlantic.

Just 10 hours and 13 minutes behind Alex Thomson’s HUGO BOSS, Le Cam crossed the Equator fourth early this morning on the evergreen 2007 Farr design which, as Foncia, won the 2008 Vendée Globe in the hands of Michel Desjoyeaux. He returned Yes We Cam! one more into the Southern Hemisphere only one hour and 54 minutes behind Charlie Dalin on the new Verdier designed Apivia.

Le Cam’s time for the passage from Les Sables d’Olonne this time is 10 days 10 hours 12 minutes, five minutes faster this time than he was on the same boat at the exactly the same point in 2016 when he lay eighth.  Clearly he only improves with age!

After surgery gave the boat more volume in the bow Le Cam triumphed in the 2015 Barcelona World Race round the world race on this same boat – sailing with Bernard Stamm, in so doing won the IMOCA Ocean Masters world title. Along with Spain’s Didac Costa, he is one of only two sailors in this fleet to be looking to complete his third round the world race in the space of five years.

“I was a bit fed up of my bean bag and my environment so I went to the bistro to go and get a coffee.” Laughed Le Cam as he ‘placed’ himself in his café. Asked about his position in the race he chuckled, “As to the foiling boats getting a chance to stretch their lead: I have always said since before the start that I am in the Renault 4 category, not in the Ferrari one, but I realise that the little R4 is very well tuned!” joked Le Cam today, “The good news is that I had a great night’s sleep. I have not had a good night of sleep like last night’s since the start.”

Leader Thomson saw his cushion shrink on the rankings today to less than ten miles, some of that due to the way the theoretical route is calculated on the official charting. His margin enlarged again this afternoon after the moving waypoint to which the leaders are racing, was recalibrated slightly west.

“Every one of these new boats has a slightly different sail and rig set up, different foil packages, different hull shapes and so each will have its strengths and weaknesses and we are all just learning about these boats in different conditions as are the skippers themselves. I don’t think Alex has any problems on board right now, some boats will be quicker in some conditions some boats in others. Right now it is about staying close. You will see the Figaro one design sailors like Charlie Dalin are keen to stay with the pack and play the long game, whereas maybe Alex and Thomas (Ruyant) are prepared to do their own thing sometimes. This is much more about risk management right now.” Commented second placed Thomas Ruyan’s LinkedOut programme manager Marcus Hutchinson on today’s Vendée Globe LIVE! show today.

Germany’s Boris Herrmann (Seaexplorer-Yacht Club de Monaco) crossed the Equator in seventh place at 0650hrs this morning, 2hrs and 54 mins behind Louis Burton (Bureau Vallée 2) and 37 minutes before Britain’s Sam Davies (Initiatives Coeur). As was expected the battle from fifth placed Kevin Escoffier (PRB) to ninth placed Yannick Bestaven (Maitre CôQ) among the boats which formed the vanguard of the 2016-17 race is very engaging, just five hours exactly between Escoffier and Bestaven in terms of time across the Equator.

Otherwise the fleet are all making decent progress, tradewinds sailing, even Kojiro Shiraishi on DMG MORI, has been doing reasonable speeds under headsails as he tries to repair the battens for his mainsail. Fabrice Amedeo (Newrest – Art et Fenêtres) has 120 miles to catch backmarker Clément Giraud and Jérémie Beyou has passed Cape Finisterre this afternoon and was making 19kts on Charal.
And Nico Troussel, who lost the mast of CORUM L’Épargne on Monday morning, finally reached a mooring in Mindelo in the Cape Verde Islands this morning.