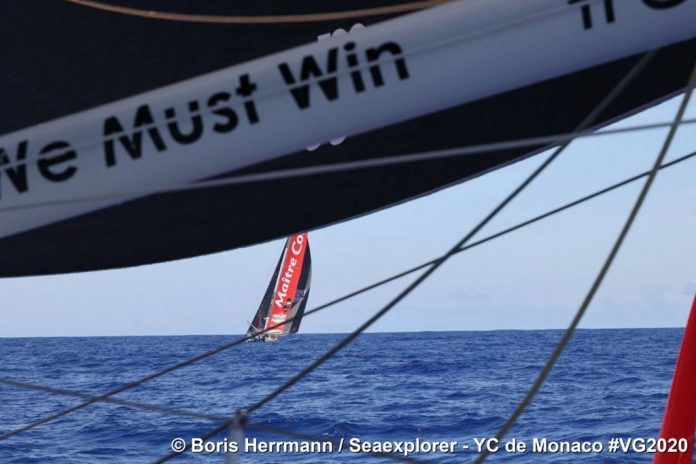 As race leader Charlie Dalin starts to finally feel like he is on the threshold of the big south, where he will race for the first time in his life, his closest rival Thomas Ruyant reported damage to the port foil of his IMOCA LinkedOut.

Ruyant was resting inside his boat during last night, around 0200hrs UTC, when he heard a loud bump. When he went on the deck of LinkedOut he quickly saw that his port foil was cracked. Team manager Marcus Hutchinson explained on Vendée Live today,

“Thomas was sleeping and about three o’clock this morning he heard a bang which woke him up and he rushed on deck and realised his port foil had some big cracks in it. He realised it is intact, it is still there but has some pretty bad cracks in it. It is quite badly damaged and so he slowed the boat down and contacted us straight away. Thomas had had a pretty tough few days with a few other little technical issues on board. He got quite tired and as we see it has been an extraordinarily tricky South Atlantic for him and for Charlie Dalin in that breakaway part of the Saint Helena high. And so the stress of staying up and trying to find a way through that, plus a few other issues and then this.

Thomas had gotten himself into a pretty tired state. And so when this happened he slowed the boat down, he went to bed and he woke up this morning. And meantime we were all working away at what the problems will be and what the solutions might be. And so he has managed to retract the foil. Our foils don’t retract fully, they retract about 1.2m into the boat and he is sailing along at the best speed right now. His boat is not compromised on port tack at all as he has the starboard foil.”

Ruyant was reported to be nonetheless in good spirits, maybe not least in the knowledge that British skipper Alex Thomson still managed to finish a very close second to Armel Le Cléac’h after losing his starboard foil on Day 13 of the 2016-17 race. Ruyant  has more than 286 miles of a cushion over third placed Jean Le Cam (Yes We Cam!) although Thomas Ruyant spent some of today slowed.

Dalin was at 38 degrees south this afternoon, some 150 miles west of the volcanic islands of Tristan de Cunha, the most remote inhabited islands in the world. The two leaders will be feeling it noticeably cooler now even if they still have another 150 miles of light upwind conditions to get to the south. It is looking increasingly like their routing will take them as far south as the Antarctic Exclusion Zone, the virtual barrier which they must stay north of all the time to keep them out of ice territory. The leaders will therefore be forced to gybe along this virtual wall at least to the longitude of the Cape of Good Hope.

Nineteen of the 32 IMOCAs racing on this ninth edition of the solo non-stop round the world race are now under the influence of the Saint Helena high pressure system in the South Atlantic. Increasingly there seems to be a chance of some of the middle order boats recovering miles by choosing to dive more directly south and catching either the west side of the high pressure which is moving quite quickly east, or hooking on to the top edge of a low. Either way, when this looked painful a few days ago, it is now appearing like a golden opportunity.

Britain’s Sam Davies, a smart meteo strategist in her own right, was one of the first to recognise this and dived south at the right time to pull back around 100 miles on Louis Burton (Bureau Vallée 2) and now lead the skipper from Saint Malo by seven miles this evening. Davies is now ninth and was still one of the quickest in the fleet this afternoon. She was sailing within sight of Burton yesterday and for some of today.

So, too was Germany’s Boris Herrmann (SeaExplorer-Yacht Club de Monaco) who is fifth, filming Yannick Bestaven (Maître CoQ) at close quarters yesterday and they are still only a couple of miles apart this evening.

Britain’s Alex Thomson should have stabilised his losses on the fleet after completing his marathon repair effort in the bow section of HUGO BOSS. This evening he is eighth 646 miles behind the leaders.