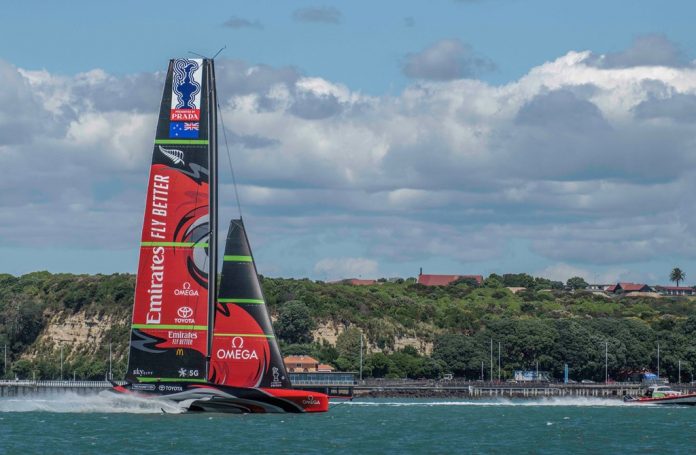 In less than three weeks four international teams from New Zealand, Italy, United States, and Great Britain will line up for the first time on their second generation of flying AC75’s for the Prada America’s Cup World Series Auckland and the Prada Christmas Race (December 17-20).

The first race will start few minutes after 3pm on December 17 and will see Emirates Team New Zealand against Luna Rossa Prada Pirelli Team. The second pairing will be American Magic versus Ineos Team UK.

With each of the teams interpreting the AC75 design rule differently there are marked differences between all four boats launched so far and therefore great anticipation to see them race for the first time.

The racing format for the four days of racing has now been finalised. For the first three days of the Prada ACWS Auckland (17th-19th of December) there will be four races per day of Round Robin competition when all of the four teams will race each other twice.

The fourth day (20th of December) the Prada Christmas Race will kick off and will be comprised of two knock out stages, the first stage consists of two head to head match ups, the winners of each will progress to the final, the losers to a 3rd & 4th match which will help decide the final rankings. The pairing of the Christmas Race Semifinals will be decided by the results of the Prada ACWS Auckland double Round Robin.

The races will be held on a windward-leeward racecourse with an upwind start and last around 25-30 minutes each.

Racing is scheduled for 1500 – 1800 each day weather permitting. The race course will be communicated on racing days by the Race Management depending on wind direction, intensity and tides. The permitted wind range is between 6.5 and 21 knots.

The America’s Cup Race village is FREE to enter and a great place to enjoy the action from, or soak up the village atmosphere. Depending on the course of the day, there are many vantage points around Auckland, from which the racing can be enjoyed while on land.

For the Challenger teams, the results from the ACWS and the Christmas Race regatta will determine the pairings for the Prada Cup Challenger Selection Series to be held in January/February 2021 that will decide which of them will take on Emirates Team New Zealand in the Match for the 36th America’s Cup presented by Prada starting on March 6th 2021.

Watch on the water: The racing area covers are wide swath of the Hauraki Gulf, with five race courses being identified depending on the weather conditions. The race course will be communicated on racing days by the Race Management depending on wind direction and intensity and tides. GPS coordinates, nautical maps and detailed information for on water spectators will be available on americascup.comcloser to the event. To know more on how to watch on the water click here and sign up to stay up to date with on water comms.

Watch On TV: The four days of race will be transmitted live on TV. To ensure both the most accessible and most complete live and highlights coverage from broadcasters in well over 120 territories, the 36th America’s Cup has partnered with free-to-air and pay networks. A second wave of partnerships will be announced before racing starts this December.

Watch Online: Every matches and racing of the Prada ACWS Auckland and Prada Christmas Race will be streamed live on Youtube, Facebook and americascup.com in almost every country around the world. The event official website will provide all the live contents including on board camera footage, Virtual Eye graphics, behind-the-scenes storytelling and more. The fans will be able to follow the action in real time on their computer, mobile or tablet without the need to download an app.

Facebook
Twitter
Pinterest
WhatsApp
Previous article
Vendée Globe 2020: the not too distant roar of the forties
Next article
Charlie Dalin leads the Vendée Globe fleet into the south