Jules Verne Trophy: settling into life in the fast track 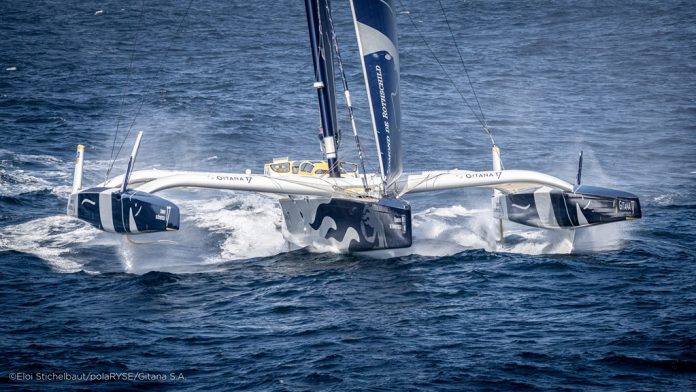 Since Tuesday evening, at 20:37 UTC on the dot, and their departure from the dock in Lorient to make for the start line off the north-west tip of Brittany, the pace has continued to pick up for the men of the Maxi Edmond de Rothschild. At 02:26 UTC, on Wednesday 25 November, on a pitch-black autumn night on the back of a rainy front, the 32-metre giant crossed the virtual line stretching between Ushant and Lizard Point, the southernmost tip of England, thus triggering the stopwatch for its first Jules Verne Trophy attempt. Since that time, Franck Cammas, Charles Caudrelier and their four crew have already covered over 1000 miles in relation to the goal. This morning, they passed the latitude of the Azores and will this evening pass that of Madeira… The pace is quick, very quick, but of course that is the aim of a speed record. At the 14:30 UTC position report, the crew boasted a lead of 71.6 miles in relation to the record held by Francis Joyon and Idec Sport.

By setting sail from Ushant in the early hours of Wednesday morning, the Maxi Edmond de Rothschild’s weather cell, comprising the two skippers and their router Marcel van Triest, were targeting a vein of quite clean air, synonymous with high speeds along a virtually straight-line course towards the trade wind of the northern hemisphere and then on to the equator. However, this fine trajectory involves quite a work-up and aboard the latest addition to the Gitana fleet, the crew has had to quickly throw themselves in at the deep end.
In fact, during the passage of over 30 hours, the six sailors have had to put in two gybes to stay inside this corridor of breeze, with the emphasis on a number of headsail changes in a constant bid to adjust their trajectory to face the conditions, which Charles Caudrelier described yesterday morning as shifty: “The first night was lively and intense! The wind was very shifty and though the seas weren’t very high, they were very messy and we spent our first night under autopilot as it was impossible to hand steer.” Last night, whilst Gitana 17 was beginning her second day of the record attempt, the wind and the seas picked up considerably offshore of the Iberian peninsula with “4.5 to 5-metre waves and a powerful 25-30-knot NNE’ly breeze gusting up to 40 knots.” Suffice to say that being constantly powered up at over 30 knots is proving to be a bracing introduction for the sailors of Gitana Team.

The latest generation maxi-trimarans, of which the Maxi Edmond de Rothschild is the pioneer, are sending the speedos into turmoil at the start of this record. The 2019 edition of the Brest Atlantiques gave us a chance to witness this in action, with a blistering pace from the get-go and an express exit from the Bay of Biscay despite the boisterous conditions. A year on, history is repeating itself and the intensity of the start of this Jules Verne Trophy is certainly living up to expectations. At 13:45 UTC, the Cammas – Caudrelier pairing and their crew had devoured over 1,200 miles over the ground at an average speed of 35 knots!

A record attempt albeit with some semblance of a due

“The writing of one of the legendary pages of this Jules Verne Trophy began last night”, stated Yann Eliès yesterday, during the live broadcast filmed at the Gitana Team’s base.

Indeed, it won’t have escaped anyone that not one but two boats set sail from the foot of Le Créac’h lighthouse in the early hours of Wednesday. Sodebo set off at 01:55 UTC and the Maxi Edmond de Rothschild followed in her wake 31 minutes later at 02:26 UTC.
These virtually simultaneous starts may be reminiscent of a race set-up, but there’s one key point to remember: the two giants are on the hunt for the record set by Francis Joyon and hence it is a race against the clock to better the time set by Idec Sport in 2017. However, it would be an untruth not to mention the adversary and the mano a mano currently playing out in the descent of the Atlantic.

“Setting sail as two boats? The idea of setting sail at the same time as Sodebo was very much on our minds since Thomas Coville team was on standby at the same time as us. From the outset, the prospect of two boats setting off was quite appealing. It’s a chance to emulate one another, added motivation! And in terms of safety it’s good too,” admitted Franck Cammas prior to the start.