HomeEventsRegattaAlone But Not Alone, Match Ups Increase The Pace In the Pack
EventsRegatta

Alone But Not Alone, Match Ups Increase The Pace In the Pack 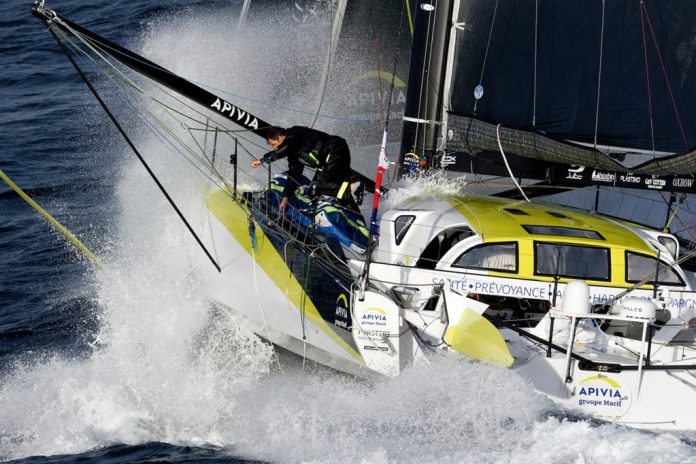 For a first timer in the ‘big south’ Vendée Globe leader Charlie Dalin is setting a good pace on board Apivia. His lead this Saturday morning is more than 320 nautical miles and his routing shows him with an added advantage of passing the longitude of the Cape of Good Hope well to the south of the adverse current and seas created by the Agulhas Current. He is in good shape but there are still more than 18,000 miles of racing remaining, the course extended slightly with the decision to raise the Antarctic Exclusion Zone north at the Crozet islands.

British skipper Alex Thomson who lead the race into the southern hemisphere has reported further damage to Hugo Boss. He told his team last night that his starboard rudder is compromised and so he has been slowed overnight, making around 11-12kts, racing with the port rudder active, not ideal to control his boat in 25kts of wind, while discussing options with his team. Hugo Boss has dropped to 13th place this on the morning position report.

After amputating most of his port foil second placed Thomas Ruyant (LinkedOut) has largely kept pace with leader Dalin who can pretty much focus on maintaining good, high average speeds on the bleak Southern Ocean.

While Jean Le Cam’s routing to the north of the peloton sees the veteran holding his own, too, relative to the fast moving posse of boats to his south, Yannick Bestaven (Maître CoQ IV) and Kevin Escoffier (PRB) are pacing each other only four miles apart, side by side, making 18-19 kts averages as are matched up Boris Herrmann (Seaexplorer-Yacht Club de Monaco) in seventh and Sébastien Simon in eighth who are only three miles apart on the water.

“I had the pleasure of racing side by side with Boris Herrmann the other day and now I am with Kevin. You are always faster when you are not entirely alone.” Said Bestaven who is also in the south for the first time having had to retire from the 2008-9 race when he was one of three boats disamsted on the fourth day of racing, “We are going well because there is wind, 25-26kts of NW’ly wind. I am pushing along with Kevin who is to windward and I try to trim and adapt my sailplan as best I can. It has been getting faster with the wind picking up since the start of the night, so for three or four hours at least. We should pass the longitude of the Cape of Good Hope on Monday evening if all goes well after a gybe around 35 ° South (to head South-East after the front) that I see around  Sunday middle of the day. The sea is not too big yet I am under a small gennaker and a single-reefed mainsail, we have a beautiful moon shining on us! It’s beautiful. The weather is nice too even if I am a bit excited by it all.  I’m pretty happy with my position: I had the goal of arriving in the south in a fairly good position and that’s the case because yesterday went well. It is a good race here especially when I am watching Louis (Burton) and Sam (Davies) to my south and they are going well. I am not the fastest of this group maybe because I don’t have such big foils. And here we are for a month like this: I’m like a kid discovering these southern seas! There are albatrosses and lots of other birds that I don’t know and but it is not too cold yet. Let’s wait for the southerly winds from Antarctica… ”