Home Events Regatta Day 31: Dalin, Ruyant out of The worst of the Indian Ocean
EventsRegatta

Day 31: Dalin, Ruyant out of The worst of the Indian Ocean 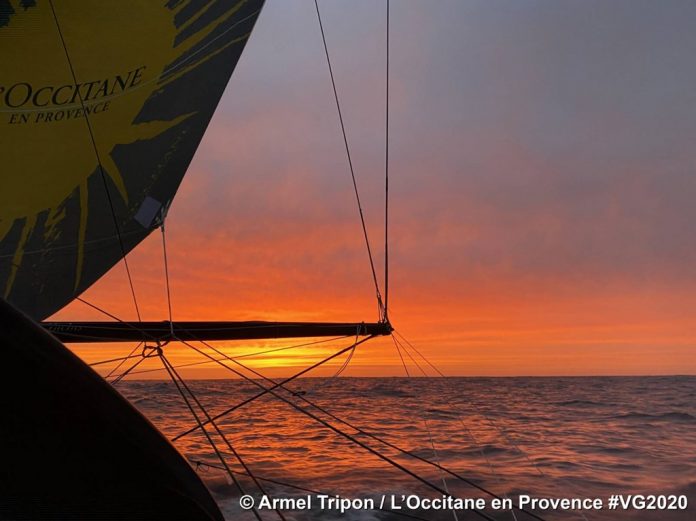 For the meantime the worst of the Indian Ocean is behind them and Vendée Globe leaders Charlie Dalin and Thomas Ruyant can contemplate a relatively smooth ride to Australia’s Cape Leeuwin, now 1250 nautical miles, or about three days, ahead of Dalin.

Dalin, some 250 miles in front and, last night, more than 120 miles to the south of his nearest rival Ruyant, took the worst of the Indian Ocean storm. Racing under triple reefed main and for much of the time no headsail at all, or a tiny storm jib, the solo skipper of Apivia saw gusts to 55kts and huge seas through the small hours of last night.

Winds have eased down to a more manageable 30kts and the two pacemakers will be into much more favourable SW’ly 20-25 knots breezes to take them to the second of the Vendée Globe’s Great Capes, Leeuwin.

Ruyant passed seven miles north of tiny, remote Amsterdam island early this morning, following a routing which kept him out of the worst of the strong depression. “I didn’t really have a choice, Charlie (Dalin) had enough of a lead to stay ahead of this front for longer but for me that would have been too hard. “

The skipper of LinkedOut, who was winner of the Route du Rhum in Class40 in 2010, saw a couple of hours with gusts to 60 knots then had a to make a difficult but controlled gybe in 40kts. “I’m glad I passed this last big hurdle in the Indian Ocean.” He said today, “Of course anything can always happen and we are not immune to anything, but that should be the last big weather phenomenon before we get to the Pacific. “

Racing to the North of the Kerguelen Islands, on the western side of this gigantic low-pressure system which is racing at 25 knots east across the Pacific, the wind is still strong for the sailors chasing the leading duo.

At 45 ° South, Louis Burton, the most southerly of all, has regained 3rd place ahead of Yannick Bestaven, Benjamin Dutreux and Boris Herrmann. The German skipper crossed tracks – like backcountry powder skiers – with Damien Seguin. For the past three days Seguin, skipper of Groupe APICIL, has been spending his time trying to solve electrical problems that cause blackouts and most distressingly the disconnection of his autopilot and battery charging problems.

Fortunately, the situation appears to be back under control. “It is the size of the waves and their direction that dictate what you do” admits Damien Seguin. “You have to do work so hard just to take care of yourself, otherwise, it becomes unliveable. You reduce sails just to be able to eat and drink.”

For almost ten days, the leading peloton of eleven solo sailors followed by Romain Attanasio (12th) and Clarisse Cremer (13th), have been aboard the Southern express train which has dealt many, many stressful moments along the way. Add the infernal noised inside their boats, shaken around by violent movements, these men and women have shown a remarkable ability to adapt to the situation. They have had to get used to life in this aggressive environment.

South of the African continent under the influence of a low-pressure system that has moved down from Madagascar, three skippers are paying a high price to enter the Indian Ocean. Contacted by phone this morning, Stéphane le Diraison (17th), stuck in the middle of the depression, an area with no wind but with a 4m swell, he was almost tearing his hair out. 100 miles ahead of him, Alan Roura was also slamming into the seas, but in 25 knots of wind and in conditions described as unbearable.

Mother Nature is not kind to the competitors. But she can offer them some moments of breath taking consolation, such as the rainbow in the wake of Maxime Sorel’s V and B – Mayenne or the blazing, red Southern dawn on the horizon for Armel Tripon’s L’Occitane en Provence. For some these golden moments live on longer in the memories than seemingly interminable storms.

Having struggled early in the race with technical problems and ending up in the second half of the fleet in the South Atlantic, Armel Tripon seems finally to have won the ‘golden ticket’, continuing to be blessed with favourable winds. His speed and timing were ideal to be able to escape under a fast-moving low pressure and he has taken nearly 300 miles out of his pursuers in recent days and will continue to profit for the next three to four days at least, racing on the heels of this system 560 miles to the west of Clarisse Crémer and Romain Attanasio.

For Jérémie Beyou, there is now the chance to finally start making inroads into the fleet with his fast foiling latest generation Charal. After re-starting nine days after the fleet left Les Sables d’Olonne, Beyou is 130 miles behind 27th placed Sébastien Destremau (Merci) and should pass in the next 24-36 hours.

Congressional Cup Chairman Chris Macy has announced the 2021 event will be postponed to mid-September in light of the status of the...
Read more
Regatta

Today passing Salvador de Bahia, Brazil, there are no options in terms of strategy and choices on the northwards climb up the...
Read more
- Advertisment -

Racing now with less than 160 miles to go to pass Recife on the north easterly corner of Brasil, leading duo Charlie...
Read more

Congressional Cup Chairman Chris Macy has announced the 2021 event will be postponed to mid-September in light of the status of the...
Read more

Today all the build up and discussion ended and the points started to count in Auckland as the first two races of...
Read more

Today passing Salvador de Bahia, Brazil, there are no options in terms of strategy and choices on the northwards climb up the...
Read more
Load more