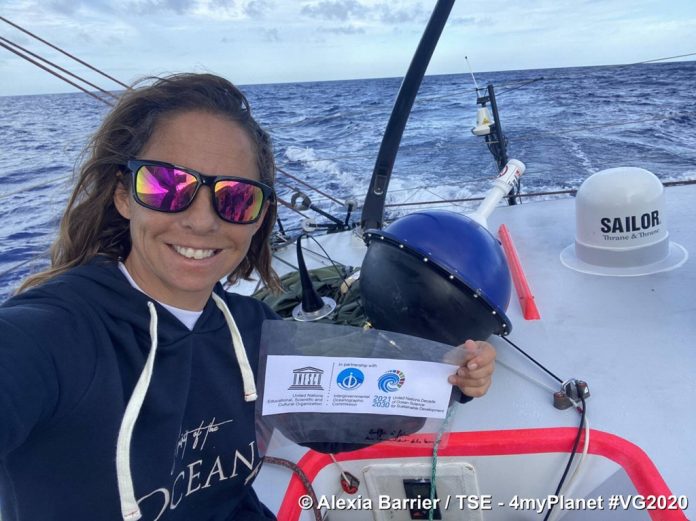 Climate day: Apart from racing single-handed around the world, more than a third of the skippers in the 2020-21 Vendée Globe are making an important contribution to global weather forecasting and the understanding of the health of our oceans.

Thirteen of the 33 skippers who set sail in early November took with them on board their IMOCA yachts either drifting buoys that gather climatological information or Argo floats that analyse sea water, or other scientific instruments.

After one month at sea, the skippers have now deployed all the drifting buoys and almost all the Argo floats at agreed co-ordinates in the Atlantic.

The final drifter will be deployed by the French skipper Alexia Barrier from her boat, TSE-4MYPLANET, when she reaches a set point in the southern Indian Ocean in the next 10 days or so, near the Kerguelen Islands.

Martin Kramp, the Ship Coordinator at OceanOPS, which works under the auspices of UNESCO’s Intergovernmental Oceanographic Commission (IOC) and the World Meteorological Organization to implement a Global Ocean Observing System, says the skippers have made an important contribution.

“These instruments will help us in areas where we have little means to gather the data which goes into the day-to-day global weather forecast,” he said. “This improves the safety of life at sea and helps us understand ocean currents.”

He added: “The information from the Argo floats is used for climatology and is also used in short term predictions for weather phenomena like El Niño and La Niña ,events that have immediate impact on humanity with droughts and floods.”

Kramp, a German-born keen sailor himself, also makes the point that in a world in which the general public is sometimes struggling to stay on message with warnings about climate change, the involvement of some of the most famous sailors in solo racing in this international programme is a big plus.

“The broad public is sometimes getting tired when we talk about climate change,”he said, “and it is difficult for scientists to raise the subject nicely. These ocean racers are the best ambassadors we can have. If they speak about ocean issues, people listen.”

The involvement of the IMOCA class with OceanOPS goes back to the formal partnership the class signed with the IOC in Paris in 2015. The partnership was renewed prior to the start of this Vendée Globe and comprises a number of joint activities around the world leading up to the start, next year, of the United Nations Decade of Ocean Science for Sustainable Development, a programme fully supported by IMOCA.

The great advantage for climate scientists of solo ocean races is that competitors travel to parts of the ocean that commercial shipping – which often deploys weather and sea water analysis instrumentation – does not go. For the sailors, however, the disadvantage is that they have to carry instruments that weigh around 20 kilos on racing boats on which saving weight is critical to optimum performance.

Kramp says the skippers who volunteered this time agreed to a lottery system to choose the locations to deploy their instruments. “We identified the target zones for the deployments and the participating skippers agreed to do the lottery,”he explained. “When they were going south in the Atlantic, we gave them deployment points at latitudes spaced five degrees apart. We started at 40 degrees north and they also needed a minimum distance from shore of 200 nautical miles. Then they were allowed to deploy in day time and in safe conditions.”

The drifting buoys send information about atmospheric pressure in real time via satellite to an international climate data network. Atmospheric pressure cannot be measured from satellite, so having an instrument in the sea is still the best way to monitor this most critical of elements in world weather forecasting.

The buoys start transmitting as soon as they are released and activated by the skippers. The Vendée Globe competitors will then benefit from the information the drifters are feeding into global weather models because that information will immediately be incorporated into the models they download to help them plot their course. As a reminder, the navigation software on board keeps the boats updated in real time as to the last position of the weather buoys on the surface of the globe.

The Argo floats, meanwhile, can last up to seven or even 10 years and operate by sinking to a depth of 2,000 metres every 10 days and then rising back to the surface, measuring water conductivity, temperature and pressure as they do so. These are key parameters that help scientists calculate salinity levels and ocean currents. The information from the floats is also used in measuring global warming.

“Before, when we had to rely on mostly research ships to take measurements, we could only look into the ocean at isolated points,” said Kramp. “Now, on a global scale using the Argo floats, we can look at up to 2,000 metres in depth everywhere and all the time. We know how much heat goes into the ocean so, for climate change, that changes everything for scientists.”

Three of the IMOCA skippers – Boris Herrmann on SeaExplorer-Yacht Club de Monaco, Fabrice Amadeo on Newrest-Art & Fenêtres and Alexia Barrier on TSE-4MYPLANET – have not only deployed instruments but are also collecting and analysing sea water samples. Their work is helping scientists understand levels of plastic pollution, carbon and other ocean parameters, using a mini on-board laboratory that Kramp helped to develop.

The involvement of the IMOCA class during this Vendée Globe in this important work follows similar initiatives by sailors in the Volvo Ocean Race (and this will still be the case on The Ocean Race 2022-23), the Barcelona World Race, the Clipper Race, the Rallies organized by Jimmy Cornell and the recent IMOCA-organised Arctique-Les Sables D’Olonne Race.

Kramp says, in the long run, he would like the carrying of weather and sea water instrumentation to be part of the IMOCA class rules for ocean races, so that every skipper, whether racing for the podium or not, takes part. “We would like it to be the same for all the skippers, so it doesn’t make a difference in terms of the competition,” he said.