HomeEventsRegattaGood conditions in the south Indian ocean, Peloton pick up the pace
Regatta

Good conditions in the south Indian ocean, Peloton pick up the pace 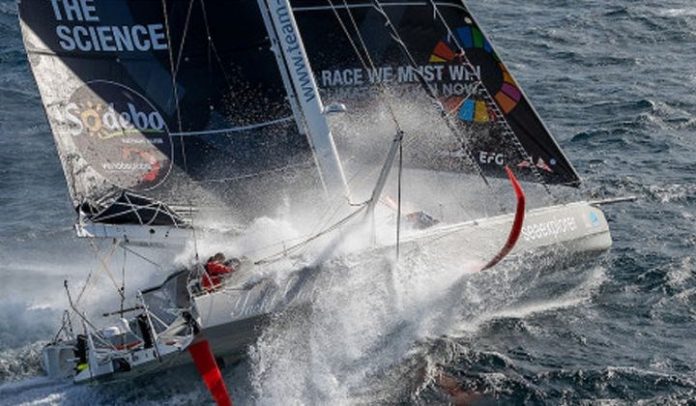 Finally blessed with good conditions in the south Indian ocean the peloton, the group which are chasing leaders Charlie Dalin (Apivia) and Thomas Ruyant (LinkedOut) have the best speeds overnight. They have been making between 19 and 22 knots while Dalin, in an irregular wind flow, has been making just 10-12 knots – perhaps Dalin has been dealing with any technical damage after the big storm earlier in the week. Ruyant meantime is always lacking power on starboard gybe after losing his port foil.

In the SW’ly breeze the leaders are aiming at the Antarctic Exclusion Zone where they will gybe and then cross he longitude of the Cape of Good Hope on Sunday night.

Yannick Bestaven, Jean Le Cam, Benjamin Dutreux, Damien Seguin, Boris Herrmann, and even slightly behind, Isabelle Joschke and Giancarlo Pedote have been making close to 20kts, indeed it is Germany’s Herrmann who is quickest this morning at 22kts. And not so far behind them Maxime Sorel (V & B-Mayenne) is also pressing hard, foot down on the accelerator. Indeed all the way through the fleet conditions are decent this morning. And it looks like a good weekend for surfing. Along the Australian AEZ the breezes should remain settled and allow some faster days.

LinkedOut skipper Thomas Ruyant reported this morning, “It is good. The last big obstacle is passed. For us the conditions are cool, it is much better and it allows us to fix any little problems on board, to eat well and sleep, I slept well last night. It is good I have blue skies, the wind is a bit irregular, but we are going steadily. It is good like this. It is the conditions we have missed for a while. He (Charlie Dalin) is here I am here, sadly I miss a bit of power on port gybe, but that is just the way it is. But we are going not bad.”

In the moderate conditions Yannick Bestaven (Maître CoQ IV) seems in great shape while Louis Burton (Bureau Vallée 2) appears, by comparison, slower. We see the fast foilers taking miles from the daggerboard boats as Yes We Cam! (Jean Le Cam), OMIA-Water Family (Benjamin Dutreux) or APICIL Group (Damien Seguin). Are we into the times when the foilers will start to move away and the natural order of things be finally established? It seems like they will work close to the AEZ.

Romain Attanasio (PURE-Best Western Hotels & Resorts) and Clarisse Crémer (Banque Populaire X) are working the the edge of the anticyclone and should dive a little south-east before touching the back of a small depression in the north-east of the Kerguelen islands.

Likewise, Armel Tripon (L’Occitane en Provence) has enough wind to be going on with, a north-west erly flow which is allowing him to make good, easy miles. But he is now very much out on his own, 700 miles to , he is now quite alone, but he has enough to go back on his predecessors, 700 miles to the boats in front and behind. Alan Roura (La Fabrique) and behind, Stéphane Le Diraison (Time for Oceans) and Arnaud Boissières (La Mie Câline-Artisans Artipôle), are all trying to get out of the high that does not to be good for Manuel Cousin (Groupe SÉTIN) either.

As for Fabrice Amedeo (Newrest-Art & Fenêtres) he is plagued by recurring computer problems (his second machine is down as is his first) and so he is climbing north eastwards towards South Africa. And near the back if Jérémie Beyou (Charal) has not yet passed Finnish skipper Ari Huusela (STARK), it will not be long. Far north in a southwesterly flow, the three-time winner of La Solitaire du Figaro should pass Japan’s Kojiro Shiraishi (DMG MORI Global One) by the end of this weekend. Kojiro will, nonetheless be happy to pass Cape of Good Hope and South Africa where he had to sail to on the last edition as he abandoned with his broken mast.