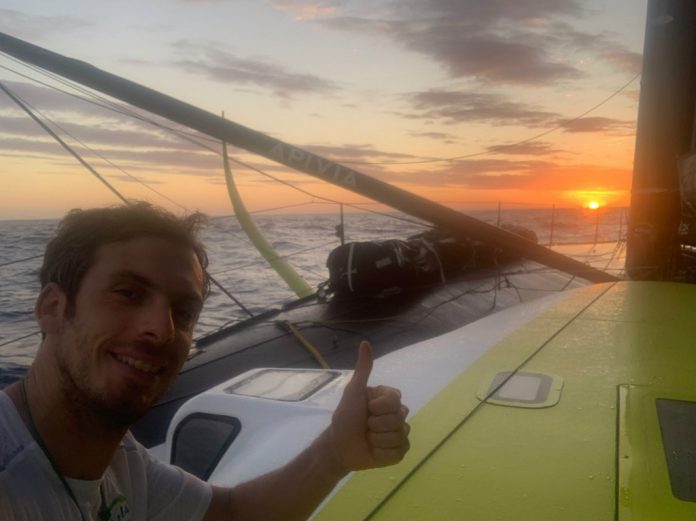 The Vendée Globe’s leading duo Charlie Dalin and Thomas Ruyant are into a period of quieter winds as they recover from the big Indian Ocean storm which hit them on Tuesday night with gusts to 55 knots of wind and big seas.

Southern Ocean first timer Dalin, 35, admitted this morning that he felt he and his boat had been very close to their limits and that at times he has turned down the wind fields on his navigation systems as the sea of red on the screen was only making him more anxious.

But the rewards for their caution, care and seamanship seems to be a relatively straightforward passage to Cape Leeuwin where Dalin expects to pass between Sunday night and Monday.

“I feel like I have earned my Southern Ocean spurs” chuckled Dalin who had never raced south of Itajai, Brazil before this race.

The leading pair on their Verdier designed IMOCAs are 214 nautical miles apart this Thursday afternoon, both making less than 12 knots in lighter airs with less than 1000 miles to make to the race’s second Great Cape.

Holding third this afternoon is Yannick Bestaven on Maître CoQ whose speed, composure and smooth strategies are proving a match for Louis Burton who is ten miles behind. Remember that Bestaven, Boris Herrmann (SeaExplorer-Yacht Club de Monaco) and Jean Le Cam (Yes We Cam!) have yet to be allocated their time allocation – redress – for the time and distance lost by them during and subsequent to their efforts to rescue Kevin Escoffier.

At 47 years old, Yannick Bestaven has 20 years of ocean racing experience under his belt. He served his apprenticeship with the legendary French technical innovator and Vendée Globe racer Yves Parlier, winning the IMOCA class’s Tour of Europe series in 1999 with Ellen MacArthur and Parlier on his Aquitaine Innovations before self-building a Mini 650 in 2001 and convincingly winning the 2001 MiniTransat. In terms of sustainable power sources Bestaven was a long way ahead of others’ thinking when he started the 2008-9 Vendée Globe on a boat which used only renewable energy sources but unfortunately, he dismasted on the fourth day of racing in a big Biscay storm.

Since then he has built the Watt & Sea hydrogenerator business, the water powered charging systems currently are used on 99 per cent of the Vendée Globe boats.

Bestaven’s VPLP-Verdier boat, built as Safran in 2014 for Morgan Lagravière, did not make it this far on the 2016-17 race, retiring into Cape Town with steering problems. The poultry foodstuffs sponsors took on the boat early after the last race and picked Bestaven as their skipper.

As they reach a spell of more settled weather now, and particularly in a couple of weeks time in the longer, rolling swells of the Pacific it will be interesting to see actually how much the fast new gen foilers are pushed.

Luck has never favoured Swiss skipper Bernard Stamm’s efforts to complete the Vendée Globe. He started four times and has never been credited with a finish time.

He completed his circumnavigation in 2012-13 but was judged to have received outside assistance whilst stopped for technical repairs in the Auckland Islands and he was disqualified. With his anchor dragging he chose in the emergency situation to moor alongside a Russian scientific survey ship but one of the crew – without being asked – helped in the manoeuvre.

Stamm paid tribute today to 46 years old English skipper Pip Hare, and to his compatriot Alan Roura for their efforts racing the IMOCA Superbigou that he built on a tight, hand to mouth budget for the 2000 race. Sadly, he had to retire early in the 2000 edition.

Stamm recalled today, “The boat was not built as I expected. I was hoping to borrow some money to make the moulds and then find a sponsor showing them the moulds rather than a detailed programme.  I was forced to borrow all the money needed to build the whole boat. Lots of friends and the people of Lesconil and holiday-makers who were there came and helped me build this boat. The boat was finally finished a few months before the start of the 2000 Vendée Globe. I spent a lot on the basic structure and that was well built. I didn’t have time to work on parts like the mast. So the mast came from Isabelle Autissier, the winch from Laurent Bourgnon, the clutches from Alain Gautier so that’s how the boat was able to set off in the 2000 Vendée Globe. It was a fantastic human endeavour. I don’t know how many miles she has clocked up, but this is the boat’s fifth time around the world. I’d say 300-400,000 miles. I’m proud to see her and to see what Pip is doing and what Alain did. They have managed to do something I didn’t and that is take the boat around the world.”