Gladiator 411 by Canados Not to put in everyone’s hands 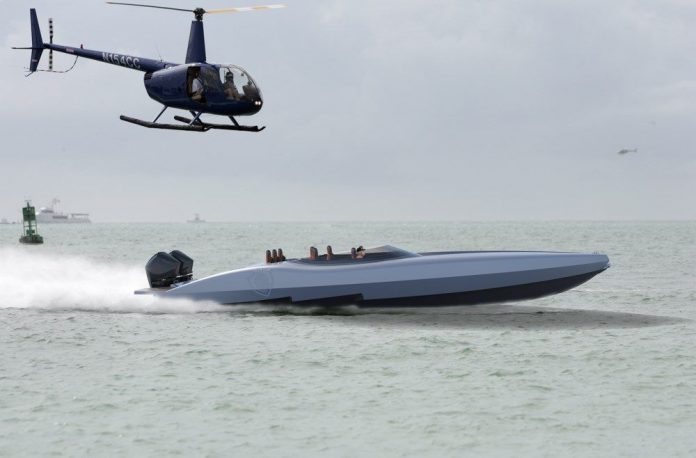 The Canados Gladiator 411 Carbon Series project was created with the US market in mind to offer a fully reliable, problem-free, 100 mph 41’ monohull.

So far, all 41’ offshore powerboats available on the market, in order to reach the 100 mph/88 knots mark, are powered with big V8 inboard motors. Not only truly expensive, they are requiring considerable maintenance and offer poor fuel efficiency.

The concept of the Gladiator 411 Carbon Series project is to offer an alternative to the big power inboards with the super reliable and silent Mercury 450R outboard engines that can be easily serviced anywhere in the world.

Not yet presented, the first 411 Carbon Series has been sold to a French client, a former owner of fast inboard offshore boats willing to be fast without the typical reliability issues and running costs of the inboards.

The double stepped hull and deck are entirely made of custom woven carbon-fiber and Kevlar – epoxy and fitted with an integrated structural tail bracket to guarantee maximum strength, rigidity and impact resistance.

As a result, the hull finesse is such, that, with an empty weight of 3100 kg, the boat will be on average 30% lighter than any other boat of this type on the market.

Despite her very sleek and aggressive design, the 411 Carbon Series will be comfortable with its five X-Craft mitigation seats, allowing to run the boat hard even in the swell.

The entire hardware, for weight consideration, is all made of anodized aluminum and has been sourced in Italy for the cleats and carbon-fiber accessories, and from the US for the rest, with a good portion of it designed and custom produced for Canados such as the inner LED lighted grab handles.

The entire upholstery will be made of Alcantara® Exo while the all boat will be painted, like every other Canados, in Awlgrip®.

All along the inception process, weight has been kept under control. On a boat this fast, and apart from the lamination, each piece of equipment had to be accurately studied to control the weight and keep the barycenter location where it should be with a positioning margin of error limited to 24mm.

This crucial aspect will only be visible at the dashboard where all the usual old-fashioned gauges have been removed and replaced by a central Garmin® 22” display and two 9” Vessel Views.

As the Gladiator 411 Carbon Series is not a boat to put in everyone’s hands, she is equipped in such way that the steering wheel can be moved from one side to the other, offering the possibility to be used like a race boat, with a throttleman and a driver, or in case the owner is willing to run her alone, he can move the helm to the other side.

Powered with twin Mercury Racing 450R with Speedmaster lower units, she will be capable of 88 knots/100 mph top speed with a continuous cruising speed of 70 knots putting Saint-Tropez from Cannes at just above 20 minutes or, still at cruising speed, Palma de Mallorca (Puerto Portals) at 55 minutes from Marina Ibiza or Fort Lauderdale to Bimini in 42 minutes.

In its triple engine configuration, the 411 Gladiator will top well above 115 mph.

Some particulars of the Gladiator 411 Carbon Series:

The high-performance market segment, both in North America and Europe is strictly occupied by US builders. Thus, this new model will open up a new market for Canados.

No European builder has ever offered any boat capable of competing with US manufacturers in terms of speed and quality. Thus, an Italian designed and build model capable of 100 to 120 mph with outboards, with the design, the fit and finish Canados is known for, will surely not leave the US market indifferent.

On the other end, the segment in Europe is virtually inexistant, mainly because European boaters do not want to deal with high consumption inboards, high running costs and lack of experts capable of doing proper maintenance on inboard engines. The Gladiator 411 Carbon Series might very well be a game changer and fill an empty gap.

A PRIVATE PRESENTATION ROAD SHOW IN THE MED:

After delivery, the Canados Gladiator 411 Carbon Series number one will be taken, together with a Gladiator 431 and a Gladiator 631, for a presentation roadshow across the Med.

Full load displacement: 4215 with 5 people onboard.

GLADIATOR NOW IN THE USA

From now on, two new demo Gladiators are based between Miami and Fort Lauderdale, a 431 Walk Around with twin Volvo inboard diesel and a 431 Speedster with triple Mercury 450R.

Both boats are available for sea-trials and presentation.

Alain Zenatti, the American Gladiator representative is on-deck to promote the US development and is currently developing co-branding with high standards luxury business partners.

From this month, Gladiator has a constant presence at Miami’s most emblematic Concept Store, The Arsenale®, in the heart of the Miami Design District and at the Faena® Hotel on Miami Beach.

Such exposure offers Gladiator a premium window in the center of MDD and without doubt, represents a true testimony of the exclusiveness Canados stands for.