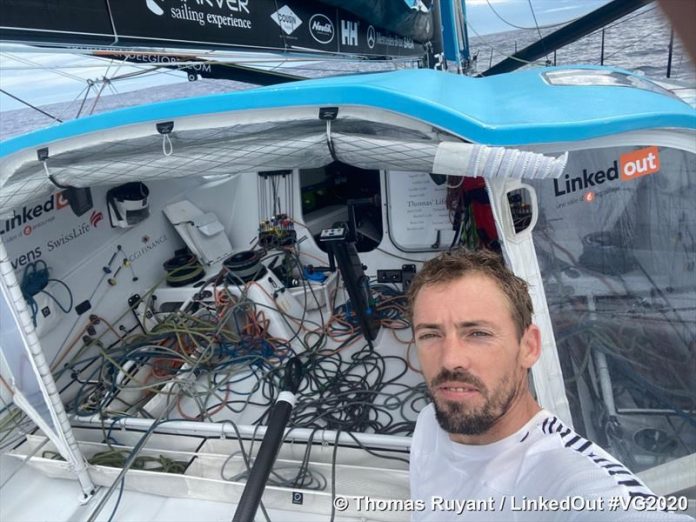 Two hours exactly afterwards, so at 0240hrs UTC it was Damien Seguin on Groupe APICIL who completed his first passage of Cape Horn, rounding in fourth at 1day 12hrs 58minutes after Bestaven. Of the four Seguin has been quickest in the Pacific by a matter of 4hrs and 19 minutes.

“Here we are friends! First Cape Horn, 4th in the Vendée Globse, that is something crazy, I can’t get over it, ”exclaimed Damien Seguin celebrating Cape Horn passage in the dark of night with champagne – a drop for the boat, the ocean and this skipper – in the cockpit of his IMOCA/

The LinkedOut / Groupe APICIL  pair are taking the same courses as that of Charlie Dalin running along the islands of Tierra del Fuego and then likely to pass through the Lemaire Straits, between the the mainland and Staten Islands.

Led by Les Sables d’Olonne’s Benjamin Dutreux, the peloton is progressing at an average of 15/18 knots in a good NW’ly flow of wind. These ‘magnificent seven’ are counting the hours before they finish their time in the Pacific. From this evening, they will follow one another in quick succession through the exit door from the Big South into the Atlantic, rounding the third of the race’s three gret Capes.

After an episode during which he was very slowed, Yannick Bestaven is back on course and the leader is sailing downwind between a small front and the high heading northeast. After sneaking through Lemaire Strait, his pursuer Charlie Dalin has gybed east. So the two will leave the Falkland Islands to port, the only obvious strategy to then tackle a high pressure area which is spreading lighter winds from the coast Argentina.

“Wait, hang on… I just jumped a wave and I’m thrown across the boat, come on grandad, come back, come back, sit up straight … there you go, it’s all good “. Showing his typical good humor, the skipper of PURE-Best Western commented live on yet another unexpected jolt that is part of his life on board for the last few hours, so forcing him to “calm things down”.  Romain Attanasio, 14th, had just rolled up his J3 (little headsail) and was sailing under mainsail only in 45 knots from the North West.

The Pacific has wakened up with strong winds sweeping through almost the entire fleet. Clarisse Cremer (12th) and Armel Tripon (13th) were experiencing the same conditions as Attanasio this morning. As for Alan Roura (16th), he described very tough conditions: “I had gusts of 60 knots. The sea is horrible, short and crossed with breaking crests. I am under 3 reefs and J3, at 70% of the boat’s performance, ”he commented. That whole group including Pip Hare, Arnaud Boissières, Jérémie Beyou, Stéphane Le Diraison, Didac Costa and further on Kojiro Shiraïshi is sailing behind the depression on which Attanasio is on the front of.

Pip Hare said “It has been a tough 48 hours. It looks very much like I am going to be in this sort of weather for the next week to the Horn. Through the night was very difficult. The wind is not stable at all sometimes 20kts, sometimes 40kts and we are seeing gusts of 50kts and I know that because I have been chatting with Alan on La Fabrique and Cali in La Mi Caline.”