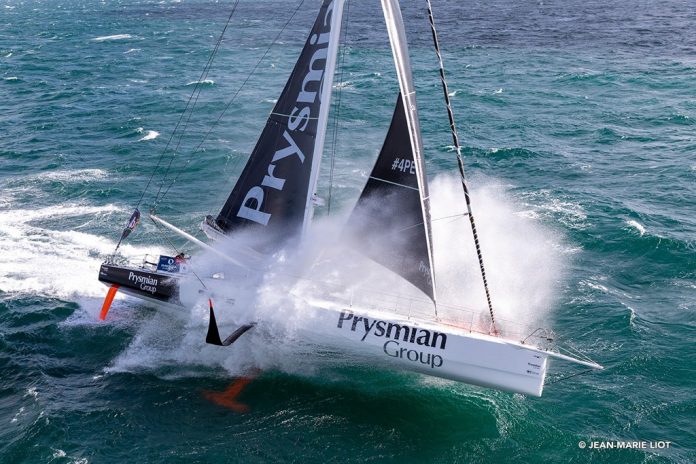 A sequence which is unprecedented in the history of the Vendée Globe continued early this morning when four more solo skippers passed Cape Horn in a period of less than four hours. Until this morning eight IMOCA skippers rounded the famous Cape Horn and passed back into the Atlantic after over one month in the Southern Oceans.

At 0016hrs UTC last night it was the first Horn rounding in the career of Maxime Sorel (V and B Mayenne), 3hrs and 58 minutes after Jean Le Cam. Italy’s Giancarlo Pedote  (Prysmian Group) rounded 55 minutes later at 0112hrs to become the first non-French skipper in ninth. At 0227hrs UTC Boris Herrmann of Germany made the fourth passage of his career rounding in tenth position on Seaexplorer-Yacht Club de Monaco, 1hr and 15 minutes after Pedote. Herrmann reported a tear in his mainsail yesterday evening and was sailing under reduced sail. Then at 0401hrs UTC this morning Isabelle Joschke crossed Cape Horn for the first time in her ocean racing career. Racing MACSF she was just 1hr and 34 mins behind Herrmann.

It was a bitterly disappointed Herrmann who approached his first solo rounding under only a J3 headsail after he damaged his mainsail in a gybe late yesterday, Losing power and speed  in the 30-40kts winds the German skipper reported, “I have 30 to 40 knots of wind, I have just the J3 on, the sea is white, and the mainsail is down on the boom right now it needs a repair job on it. I did a little gybe to get out from the Continental shelf to avoid any breaking waves and then I gybed back half an hour later. I can’t put my mainsail up I damaged it in a gybe when I took a reef. The battens caught under a shroud and it started flapping. So it is another slap in my face but it puts up my fighting spirit. I will never give up but I have lost my zone and that hurts, it  hurts so badly. But OK I have to put a patch on the other side of the sail and then stitch the leech. Anyway, Cape Horn, we are there but we won’t see it, it is too dangerous to be in close, especially under powered like this. I am waiting for some relief.”

In two days 11 IMOCAs have rounded Cape Horn. In less than 12 hours last night, six skippers passed out the Pacific to enter the South Atlantic. The deltas are tiny and point to a very tight climb up the Atlantic paced at regatta intensity. There were 55 minutes between V and B-Mayenne and Prysmian Group, which in turn was 1h15 ahead of Seaexplorer-Yacht Club de Monaco. Isabelle Joschke 1hr 34 mins after Herrmann. The finishes into Les Sables d’Olonne are going to be breathtakingly close.

Bestaven serene, Dalin on the attack
Speaking on the morning radio calls the two leaders were in good voice after proper rest.

“I slept like never before yesterday. And while sleeping I gained 40 miles on Charlie. It works well when I take a long nap.The wind didn’t shift at all it was the boat doing it on its own. “

Yannick Bestaven smiled this morning more than 235 miles ahead of Dalin. The skipper of Maître CoQ IV seems optimistic about his passage through the high pressure area which is blocking the route to the north of the Falkland Islands: “On the face of it, I should pass through OK. It’s going to slow me down like it will everyone else, but first in first out. I worked hard yesterday, so I don’t waste time being caught for too long.”

The strategic choices are playing out on smooth seas and easing winds, a world apart from the Southern Ocean. Lighter winds are good for tired bodies but the brains are working overtime.

Charlie Dalin well recovered is working hard on his routing but admits not having THE solution. “We find ourselves in an area where strategy and investment are important, except that forecasts change enormously. The situation is very complex and the files are not that great. “Explained the skipper of Apivia.

In third Thomas Ruyant is betting on the North.  He is looking to pass the high pressure to the west making upwind in a little more wind. In 48 hours there will be a clearer view of the potential outcomes between the three.