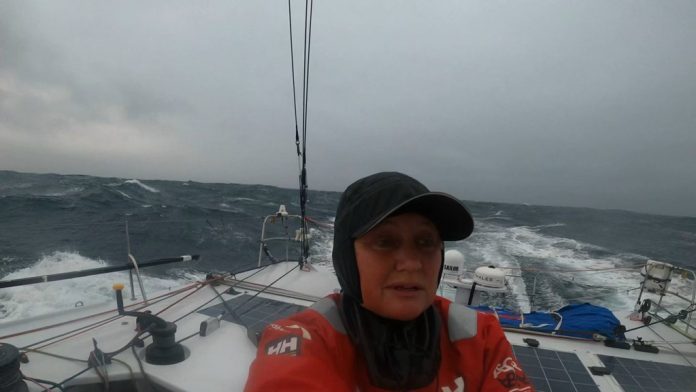 Britain’s Pip Hare is looking for a benevolent small weather window in the depths of the South Pacific Ocean to allow her to replace the port rudder of her IMOCA Medallia after she discovered a crack in its stock (the shaft which locates into the hull of the boat). It is complicated operation which the 45 year old solo Vendée Globe skipper practised at the dock in Les Sables d’Olonne, France before the solo non stop race around the world started on November 8th 2020, but which will be made much more difficult in one of the most hostile and loneliest areas of the southern oceans.

“The crack is in the stock between the deck and the hull, just underneath where the quadrant attaches and every time the pilot was going to move the rudder the crack was getting a little bit worse. I have no choice but to change the port rudder. If I continue sailing hard the stock will fail under load in a matter of hours.” Hare reported, “Naturally I am completely devastated about this failure and what it means to my race but the only thing to do right now is to put the racing on hold and focus on solving this problem to keep both me and Medallia safe.”

In her message the 45 year old from Poole, Dorset, added,

“I am devastated but I am also accepting. This has happened and it cannot be changed. The only action now is to deal with the problem in the best way possible and then move forwards from there. I am hugely proud of my performance to date. It has been a total joy to race this intensely for 59 days and it will be a total joy to get back into the race when I am finished. I had a few tears but not many because this problem is a big one and there is only one way to deal with it – which is a total focus of energy on solving it and staying safe. I will never forget the fact I was 15th for so long and when I get back to racing again, whenever that may be I will do my very best to claw my way back up the fleet again for now I have just hit pause.”

Her team say that Hare is looking to a potential break in the weather during the small hours of tomorrow (Thursday) morning, when the operation might be possible.Medallia’s boat captain Joff Brown explains the procedure:

“The problem really is in getting the old rudder off because it is buoyant and so sinking it to get it out it is not easy to get a lot of leverage from the bottom. But it is something we had practiced in Les Sables d’Olonne before the start and so I think that gives Pip a bit of confidence in what she has to do. But the problem is the sea state has to be reasonably flat because when the rudder is angled and heels then there is more strain on the bearings. At the dock this whole process might take an hour or so but in seas like this it can take much more. But Pip is very focused and determined. There is a small weather window around 0100hrs (UTC – when it is still daylight for Pip) but if not then it could be a couple of days waiting. She is resigned to the situation and I am sure will deal with it and get on with what she has to do.”

Medallia had a new spare rudder built by Jason Carrington Boats just before the boat was delivered to Les Sables d’Olonne. According to Brown this a standard procedure which he has practiced pre-start by previous skippers Dee Caffari and Rich Wilson previously using a method devised by Conrad Humphreys in 2004-5 where 50-60kgs of anchor chain is lowered below the rudder to help drop it out.  (see video here https://www.youtube.com/watch?v=U_kjoL8DFi8).

Medallia was lying in 15th in the Vendée Globe fleet and still making just under eight knots under reduced sail. Alan Roura who is 16th is around 20 miles behind.

Bestaven makes a break but will it be decisive?

Escaping first out of a high pressure which had slowed the leading four boats, Yannick Bestaven the skipper of Maître Coq has gained over 200 miles on the solo skippers immediately behind him. The 48 year old from La Rochelle has the biggest lead of the race yet at 440 nautical miles, ahead of Thomas Ruyant (LinkedOut) who passed Charlie Dalin (Apivia) again today, the French duo match racing only 12 miles apart today some 400 miles SE of Mar del Plata, Argentina.

Bestaven, freshly shaved and looking bright, said: “It’s great to have been able to pass the high-pressure zone, I was able to gain some miles and then make good speed, it hasn’t been bad at all. I am satisfied with that, but when I look at what is going to happen ahead of me… I feel like the bungee cord is going to snap back and those behind me will start closing the gap. I hope there will be enough wind, as I only have a few tens of miles of advantage left. But I can’t let it stress me, I’m going to have to keep a cool head because I am going to lose a lot of ground again.”

He joked, “I don’t know who has been in charge of the weather during this Vendée Globe, but I’m telling you, we need a new meteorologist! It looks like everything has been working against us being able to arrive quickly back in Les Sables d’Olonne! The situation is very complicated, there are some lows which will suck up all the wind. Forming a strategy is difficult, because different models are showing different things. I don’t think that anyone really knows how it’s going to play out, but we’ll have to be on top of it. I’m going fast but I’m also resting a lot to make sure I have my eyes wide open during the difficult 24/48 hours ahead, and be able to make the most of the wind that there is. I’ll have to approach at low a speed in the north to pick up on new winds. It will be a bit “Figaro-esque” and I know I have experts behind me. It won’t be a walk in the park! I’m going to try to make some real headway towards the end goal.”