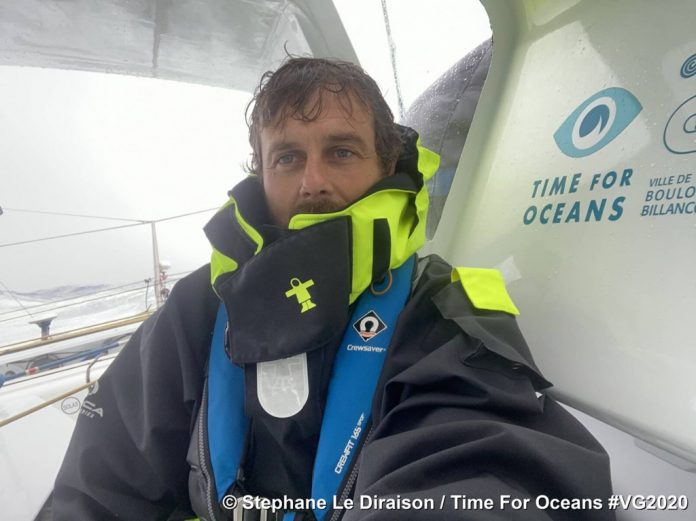 The Pacific is proving particularly unrelenting for the Vendée Globe competitors still racing eastwards towards Cape Horn. There might be the odd pause for a few hours before the next low pressure system kicks them along the course towards deliverance, and the big left turn out of the Southern Ocean and into the more sheltered waters of the Atlantic.

The next wagon train of IMOCA 60s presently routing their approach to the Horn is led by Switzerland’s Alan Roura, with Arnaud Boissières and Briton Pip Hare all close behind. These three musketeers should pass between Sunday night and Monday lunchtime.

Roura, 27 years old, heading for his second consecutive Vendée Globe Cape Horn rounding and Boissières his fourth, have gained miles against Hare today, as the British skipper stays a little bit conservative after her rudder problems and conserves her energy for the final push, which will be in strong winds on a big low-pressure system. At the front of it today the two foilers, La Fabrique of Roura and La Mie Caline-Artisans Artipole, have been three or four knots quicker than Hare’s Medallia.

One hundred and fifty miles further astern both Didac Costa, the Spanish skipper of One Planet-One Ocean and Stéphane Le Diraison on Time For Oceans have had their toughest time of the race so far with gusts over 50kts at times, the French skipper giving a vivid description of being knocked nearly flat in a huge squally gust.

“I think I got the worst of it with winds reaching 60 knots and waves with troughs of six to eight metres. The memory of it will stay with me for life. I have this image of a squall in 60 knots of wind, breaking waves, no sail up, the boat on its side in a snowstorm with the wind howling in the rig with a total sense of powerlessness in the face of these crazy conditions. It is mad to watch the sea which is white, almost like frothing milk and spray coming from all angles. It is just quite incredible. I am happy to have experienced it, it is quite an experience on a human level to have come through this, particularly physically, because it is so cold, but also on a mental and stress level, it is extremely demanding.”

He continues. “It is so cold, you just wrap up with all you have, it is just four degrees inside the cabin and then you hear the waves breaking on deck or being knocked down by a wave and you have to get dressed in the wet clothes and go out in the middle of the night. It is then that you have to just not think about it or question yourself. That is why I like that expression you just have to disconnect your brain, to concentrate on what needs to be done. Get out of the bunk, get dressed and go through the list of things that need to be done and leave the analysis of it all for later.”

By way of sharp contrast in the South Atlantic off the coasts of Argentina, Uruguay and the south of Brazil it is hot for leader Yannick Bestaven (Maître CoQ IV) in more ways than one. He has seen his lead shrink from 435 nautical miles to 263 this evening. And in second place Charlie Dalin is pushing Apivia very hard in near ideal foiling conditions, flat seas and 15-17 knots of breeze, constantly making 23-25kts averages to be 50 miles ahead of third placed Thomas Ruyant (LinkedOut).

Dalin told Argentina’s three times Olympic medallist Santi Lange today on the Vendée Globe Live show, “I have good conditions to go fast, I currently have 22-23 knots of boat speed for 15 knots of wind. So, I am on the right foil. The sea state is getting flatter and I can feel the distance between Yannick and me shrinking so I hope that carries on for as long as possible. It is not going to be a straight line for me onwards, but there is an opportunity here and I am on it.”

Lange, like Dalin a qualified Naval Architect, asked about the foiling ability of the new generation boats in the south and how close they have been to hopes and what they saw during training, Dalin replied:

“It is a lot related to the wind stability. If it is a very gusty day you cannot carry as much sail as if the wind was more stable. And also, the sea state, the sea state was the biggest problem in the Southern Ocean. In the Indian and part of the Pacific we just could not push. The sea state did not permit it. But yesterday I was still under my speed polars, because I was in a 2m seaway. And when I was reaching speeds of 30kts then the slamming is too much. The sea state is such a factor. Obviously, you push less hard than you do in training. You cannot be trimming, on the sheets all the time, you have to be able to leave the boat to go when you are sleeping. You run a few percent below what the boat could do. Sea state and wind stability.”

Of the wind conditions and strategy ahead Dalin concluded: “It is going to be a complicated days ahead, dealing with the high pressure which will pass behind Thomas and I, and there will be transitions and the trade winds and this high pressure which is really, really complicated with a big area of no wind. It is changing all the time on the GRIB files. It is going to be a tough ascent to tackle I see there is an opportunity to catch up. So hopefully it will go OK.”

In ninth place, this evening Germany’s Boris Herrmann has ground in Italian skipper Giancarlo Pedote and the two were racing in sight of each other.

Six hundred and sixty miles behind Bestaven and 134 miles from fifth, Herrmann said, “I am in sight of Giancarlo. We are through the strongest winds on the low, I hope, I think. It is pretty light right now. I am a little suspicious this might be just a little joke to then to knock us down in half an hour or do we set more sail. I think I might go up to the J2 from the J3 and two reefs. The sea state was better than expected. In general, this whole system was gentler than expected. I was not looking forwards to the system but in the end so far so good. Now we are sailing downwind with this flow for 12 hours or so, then gybing away. We have a huge lull Sunday evening before we enter the trade winds. I think I will postpone my champagne until we are in the trade winds. There is always something to do and there is not yet a moment to appreciate champagne properly. So far so good.