HomeEventsRegattaBestaven in the lead, only 121 miles separate to 9th Jean Le...
Regatta

Bestaven in the lead, only 121 miles separate to 9th Jean Le Cam 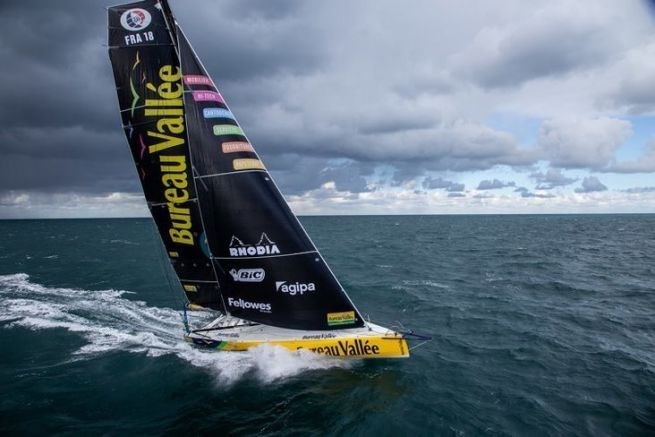 “It’s crazy.” Confirmed Thomas Ruyant from fourth placed LinkedOut this morning as Yannick Bestaven (Maître CoQ IV ) retakes the lead from Charlie Dalin (Apivia). Not only are there just 26 miles separating Ruyant in fourth from the leader again, but Louis Burton (Bureau Vallée 2) has squeezed into third, to complete his fairytale return to the podium after stopping to make repairs to his mast track at Macquarie Island and restarting with an 830 miles deficit on the lead.

And between Bestaven – who also carries his 10hrs 15mins time redress – and Jean Le Cam (Yes We Cam) in ninth there are 121 miles and Le Cam has 16hrs 15mins in credit. And in between the two is sixth placed Boris Herrmann (Seaexplorer-Yacht Club de Monaco) who is 63 miles behind Bestaven and has six hours of recompense.

Bestaven has picked up wind to the west of his rivals, closer to the Brasilian coast, and is heading NNE in the ENE’ly wind and the the skipper from La Rochelle is gradually reducing his separation from the chasing trio which are compacted into a postage stamp of about 20 miles by 20 miles.

“We are getting into a trade wind now but it is variable in force and direction, you have to be on it here to trim and adjust for the changes” said Ruyant this morning, “But the wind is building slowly and lifting us so we should get some higher speed foiling in due course.”

Into this mix it will be interesting to see how Ruyant fares with his truncated, drastically shortened port foil and if second placed Dalin can work at max power with his foil bearing repair on his port side too. Clearly the benefits to Louis Burton of fixing at Macquarie cannot be overstated as he has been quickest among the leaders, making 13-14kts of speed in winds just less than that, as has Ruyant. And with boats at 100 per cent – Boris Herrmann is very fast with his newer generation foils while in Giancarlo Pedote (Prysmian Groupe) has first generation ‘moustache’ foils but has consistently been quick in eighth.

Until now the non-foiling daggerboard boats have largely held their own. Damien Seguin (Groupe Apicil) in fifth, seventh is Benjamin Dutreux (OMIA – Water Family) and ninth Jean le Cam (Yes We Cam!) are all in the east looking to benefit from being on the inside of the curve of the high pressure and so be able to sail higher, more direct angles as the breeze lifts them more than their rivals to their west, also sailing less miles. But this period, into the trades, will be their acid test.

A gap has opened back to Maxime Sorel in tenth, now 170 miles behind Le Cam and then there are 416 miles – or a day – between him Armel Tripon on L’Occitaine en Provence. And so it is a big ask now for the skipper from Nantes on the scow bowed Sam Manuard design to make the podium. But given the way this race is running, is it?

In 13th Romain Attanasio is emerging from a nasty South American low pressure which has seen him upwind in 40 knots with squalls to 50 knots. Attanasio reports that he was thrown onto a winch in one knock down and has injured his ribs. “ But it hurts like hell when I take a deep breath. But the good thing is I am downwind now and it feels like the worst is over.”

Next in to Cape Horn will be Stéphane le Diraison (A Time for Oceans) who is just on 100 miles to the rock this morning, Spain’s Didac Costa is 160 miles early this morning and Japan’s Kojiro Shiraishi (DMG Mori 1) is just over 200 miles, making for an international day at the Cape today.

Costa will doubtless be delighted at his third racing Horn passage but for Le Diraison and Shiraishi who both had to retire from the 2016-2017 race with  broken rigs, the third Cape will be a delight. Le Diraison recalled this morning his biggest storm of four days ago.

“The files told me that the swell was 7.5 meters but that means really waves of 10 meters. When I looked out my forwards looking window, I saw myself surfing down faces at 30 degrees I saw solid mountains of water rushing towards me. I ended up not looking at anything anymore!” And then yesterday the trio were trapped in a bubble of light airs. They will deserve their Cape Horn moment.