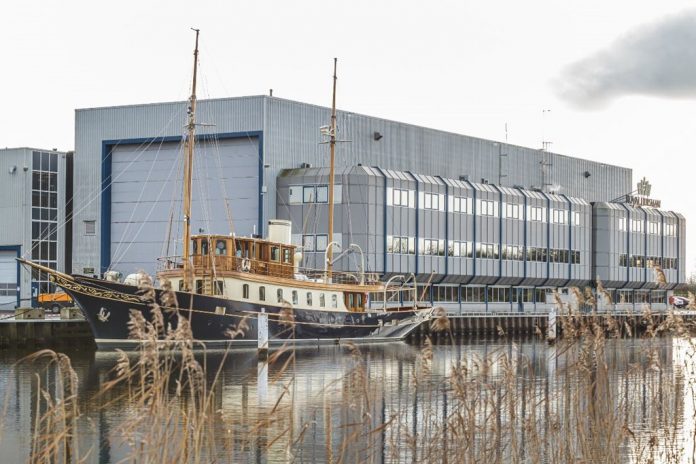 The team of Royal Huisman and Huisfit is honoured to merit the continued trust of Dr. Jim Clark, who commissioned the shipyard to carry out the very special restoration of his most recent acquisition, the 1930’s yacht Atlantide. This 37m / 122ft classic motorsailer was shipped from Newport, USA, to the Netherlands, and arrived at Royal Huisman’s headquarters in Vollenhove in the first week of 2021.

Following the successful 2020-refit by Huisfit of Jim and Kristy Clark’s famous J-Class yacht Hanuman, and with three newbuild orders already completed by Royal Huisman in recent decades (Hyperion in 1998,  Athena in 2004, and Hanuman in 2009), Dr. Jim Clark decided the same craftsmen and women are best suited to take on this new project – rebuilding Atlantide at the quality level Royal Huisman is known for.

Atlantide was designed by naval architect Alfred Mylne and built by the British shipyard Philip & Sons in 1930. Following Atlantide’s rich history spanning over 90 years, the team of Royal Huisman and Huisfit is grateful for this opportunity to preserve Jim and Kristy Clark’s legendary yacht well into the future. The shipyard’s team has an established track record of success with the restoration of classics, conversions, and rebuilds of historical yachts: structural work, updates and conservation work are all embarked on with keen interest and great skill. Rebuild and conversion projects by Huisfit are never a “typical refit”, and the scope of such projects is often as comprehensive as a newbuild – perfectly suited for a team equally at home in both areas of expertise.

Jan Timmerman, CEO Royal Huisman comments: “If a discerning client commissions a fourth very substantial project to the same shipyard, you just know that the work you perform is truly appreciated. So we are most honoured to find ourselves in the position to realise yet another dream for our esteemed clients Jim and Kristy Clark.

Having received the prestigious “Best Rebuilt Yacht” award for the rebuild-project of the 1913 Herreshoff schooner Vagrant in November 2020, we look forward to starting a new restauration in addition to the current refit projects of Huisfit – a project so grand in scale, that we will be allocating it the same status as a new project. And, a very special, unique, and historic project, which we are certain to make into a success thanks to our skilled craftsmen and women together with the Owners and their team!”

The rebuild of Atlantide is scheduled for delivery in spring 2022.