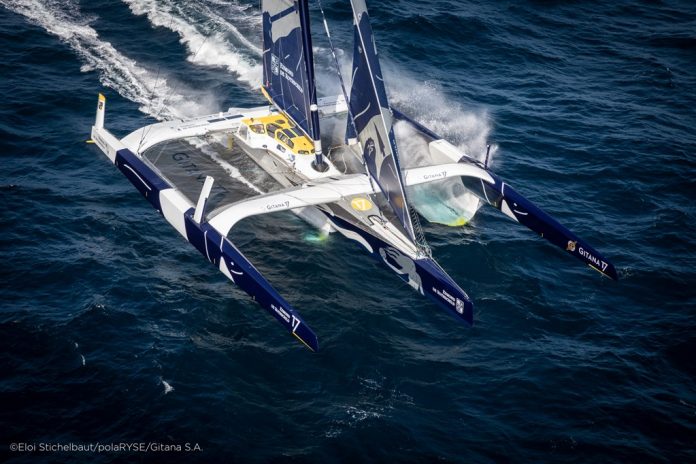 After setting sail from Ushant on Sunday 10 January at 01:33 UTC on the quest for the Jules Verne Trophy, the crew of the Maxi Edmond de Rothschild crossed the equator this Friday 15 January at 14h48’32” UTC, after 5 days 13 hours 14 minutes and 46 seconds at sea. Though this first passage time is a far cry from the outright record for this section, which has been held since 2019 by Spindrift Racing in a time of 4 days 19 hours 57 minutes, it has nevertheless enabled the sailors of Gitana Team to make the switch into the southern hemisphere with a lead of nearly six hours over the time set by Idec Sport.

This symbolic passage between the two hemispheres is certainly a moment for celebration for Franck Cammas, Charles Caudrelier and their four crew (David Boileau, Morgan Lagravière, Erwan Israël and Yann Riou), but above all they are happy to have rediscovered more favourable sailing conditions with which to do their steed justice. Indeed, the doldrums has been tough on the men of the flying maxi-trimaran. Finding herself with her wings clipped due to running out of breeze, the 32-metre giant struggled to extricate herself from the clutches of the infamous intertropical convergence zone. Throughout the course of the day yesterday and the following night, the crew had to simply learn to bide their time as they amassed multiple manoeuvres under a burning hot cuddy in a bid to make the most of the slightest gust and the tiniest cloud. This is evidenced by the navigation statistics from the past 24 hours: a little less than 260 miles covered at a speed of 10.8 knots with a VMG of just 6 knots… It proved to be interminable for a team of sailors striving to secure the round the world record under sail, who like nothing better than high-speed sailing.

However, aboard the boat, it’s with this philosophy that the crew traversed this zone, as Charles Caudrelier explains: “It wasn’t that hard in the sense that we always managed to keep the boat moving, even if it was extremely slow progress at times… but that enabled us to get some rest, because even though the start of our race wasn’t very violent, we were going fast so it’s never easy to sleep well. Right now, we’ve nicely recharged our batteries, we’ve found our sea legs and we’re right into the action. The last few calmer hours have also enabled us to do a thorough check of the boat, which is good because we won’t have a lot of opportunities to do that further down the track. We’re attacking the southern hemisphere with a boat in fantastic shape and that’s the best news! We’d certainly have liked a better passage time to the equator, it’s always nice to break a record, but with the doldrums you never know how things are going to play out. It wasn’t very wide but it was very painful.”

Welcome to the South Atlantic

Franck Cammas, Charles Caudrelier and their four crew launched off on the Jules Verne Trophy with a weather pattern in mind. Indeed, the transition into the South Atlantic contributed a great deal to their choice of weather window and the time they crossed the start line off Ushant. The idea was to get to a point offshore of Brazil when a sufficiently powerful front powering down to the Southern Ocean unleashed itself from the South American continent. And to benefit from better conditions for slipping along, which come with the guarantee of high speeds, you generally need to position yourself in front of this train of low-pressure. This whole sequence is the current target for the crew of the Maxi Edmond de Rothschild and their weather router, Marcel van Triest, if they are to stand a chance of securing a fine passage time to Cape Agulhas, in South Africa: “The time lost in the doldrums will not have a drastic effect since we’re arriving in the south at the right time, just as the models are being corroborated for hooking onto the right weather system. The problem that may be posed now is that we don’t have a lot of leeway. For the next four days, we’ll need to be quick and precise in our trajectory so that we don’t miss the train of low-pressure systems to the south of Rio,” underlined Charles Caudrelier.

An explanation of the timing

The lead and deficit, which appear on our cartography, are calculated at each ranking in terms of the distance to the goal. With the Maxi Edmond de Rothschild crossing the equator further over to the west than Idec Sport and hence further from the direct course (great circle route), she lamented a 16.6-mile deficit in relation to her virtual adversary. However, in terms of the actual time between Ushant and the line dividing the two hemispheres, the flying five-arrow maxi-trimaran was faster than that of Francis Joyon and his men. Five days 13 hours 14 minutes and 46 seconds for Gitana 17 compared with 5 days 18 hours and 57 minutes for Idec, which translates as a passage time 5 hours and 44 minutes quicker.