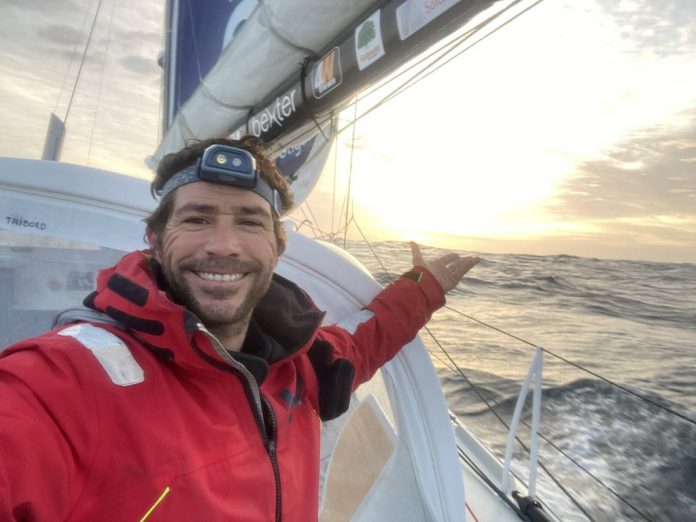 The Vendée Globe remains wide open. A leading group of nine skippers form the vanguard with a  slight advantage for two skippers, Charlie Dalin and Louis Burton.  The skipper of Bureau Vallée 2 continues his more westerly route and all eyes are on the weather files. But all the way through the fleet, even at day 72 of racing, there is an intense satisfaction in still being in the race, from the front runners all the way through to Finland’s Ari ‘Super Happy’ Huusela who should round Cape Horn this weekend, and shut the exit door from the Pacific behind him

Depression, gales, three storey building sized waves, even the Doldrums, at 72 days most are deeply happy. The morning on the Vendée Globe started today at 0400hrs UTC with the voice of Clément Giraud, a happy Cape Horner since Sunday. The skipper of Compagnie du Lit / Jiliti, send  positive messages to those who are following him from land, “We are the lucky ones, we are really very lucky, we sailors in the Vendée Globe, because we don’t talk about money! The word “euro” has been struck from our vocabulary … Here, “happy” is the most used word!”

And a few hours later Armel Tripon (L’Occitane en Provence) echoes the same message: “Happy? Yes, I still am. Several times a day, I tell myself that I have an incredible chance to do this race, that I am having strong, intense and fabulous moments. And I’m having a blast! ” So too Ari Huusela “I have a month left to the finish and I feel like I could do another month beyond that. I am so happy out here. At less than a week to Cape Horn I am loving every day.”

Rankings, a moveable feast? “The situation has not really changed since yesterday,” smiled Christian Dumard, the Vendée Globe weather expert. Charlie Dalin (APIVIA) and Louis Burton (Bureau Vallée 2) are still out in front. The skipper who now lives in St. Malo has moved slightly further west. “His  is an interesting strategy,” added Christian Dumard. “As if the timing (of the incoming low) is not as forecast, he will have no margin to play with.” Burton was the guest on the French Vendée Live this lunchtime: “I am trying to build on the fact that I got quickly out of the Doldrums, so am sticking with this strategy.” Armel Le Cléac’h, the winner four years ago, believes that five sailors are in with a chance of winning this time. The two frontrunners, Dalin and Burton, along with Thomas Ruyant, Boris Hermann and Yannick Bestaven. “We are going to have to take into account that the sailors are tired and their boats too,” he added.

The meaning of the rankings

Beware of the rankings! “The further we go forward, the more they give a one-sided picture,” added Christian Dumard. The battle between the nine skippers at the front of the fleet is so hard fought that their position in the rankings should be taken with a pinch of salt. The skippers are ranked according to their position based on the distance left to sail to the finish. However, it is impossible to head straight for Les Sables d’Olonne…  The weather expert added that the measurement uses the longitude. So, while Damien Seguin retook second place today at noon, he is in a much less favourable position than Louis Burton, who is currently fifth. In fact, Groupe APICIL is more than 450 miles from APIVIA from west to east, while Bureau Vallée 2 is just 230 miles away in longitude from the leading boat.