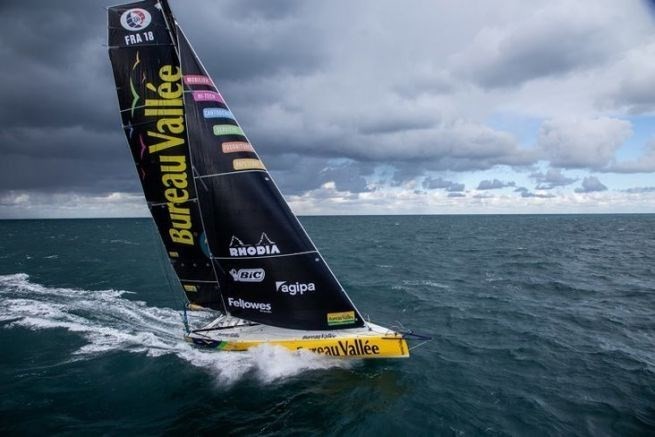 Climbing the Atlantic in NE’ly trade winds there are two basic options, to stay close to the wind and sail a higher angle at around 12-15kts boatspeed as Charlie Dalin is doing or to keep the bow down a bit and sail faster as Louis Burton and Yannick Bestaven are doing. The difference in compass course is about 10 degrees but that has already developed a lateral separation of more than 200 miles between the leader Charlie Dalin (Apivia) and Louis Burton (Bureau Vallée).

Dalin will work the inside of the curve, formed first as his trade wind is lifting him to sail a higher angle, his being around 70-80 degrees, Burton at 90 degrees, beam reaching. And the boat on the outside of the curve is sailing faster but a longer distance. But the two should meet up close to each other somewhere just south of the Azores

Charlie Dalin, leader, pointed out this morning, “Within 48 hours, we should be over the ridge that we are skirting around and then we will get into the Atlantic lows train. But it’s likely we will slow down by late afternoon today and tonight we’ll really be under the influence of the high pressure. I chose the inside of the turn but at the exit it’s quite possible that we end up in roughly the same place with Louis (Burton). “

The outcome of this head to head will really not be known until the end of the week. At this stage it is hard to know who is doing best. And in the next period the trade winds will fluctuate more as the high pressure area is approached.

On the rankings and tracking a new theoretical target waypoint has been added at 37 ° N and 25 ° W (approximately the island of Santa Maria in the Azores), and so the ranking changed a little compared to the previous one, Les Sables d’Olonne. And on top of the complexity of the curved course recall that three skippers still have time allowances after the rescue of Kevin Escoffier, Jean Le Cam (Yes We Cam!), Yannick Bestaven (Maître CoQ IV) and Boris Herrmann (SeaExplorer-Yacht Club de Monaco) but their redress is hard to factor in because an IMOCA will do between two and 20kts in any one hour. So we will not know until this finish how this will affect the final results.

Meantime Armel Tripon (L’Occitane en Provence) crossed the equator last night at 2032 hrs UTC that is  ten and a half hours after Maxime Sorel (V and B -Mayenne) who is ahead of him in 10th.

Tonight Clarisse Crémer (Banque Populaire X) should pass into the Northern Hemisphere while Romain Attanasio (Pure-Best Western) will probably have to wait until next weekend
Isabelle Joschke (MACSF) is aiming for Salvador de Bahia which she should reach this weekend.

Further south, the situation is very different between the Boissières-Roura duo who struggle in light airs and Pip Hare (Medallia) who will have to tack upwind towards Cabo Frio. Still in the Pacific, the Finnish skipper Ari Huusela (STARK) has only 1,200 miles left before reaching Cape Horn in a powerful westerly flow which is expected to ease at Patagonia.

For the first time since the first Vendée Globe in 1989-1990, the last skipper will have passed the Horn before the first has finsihed into the Les Sables d’Olonne, or indeed even in the Bay of Biscay. So this ninth edition is clearly slower for the leaders but ultimately faster for the back markers.