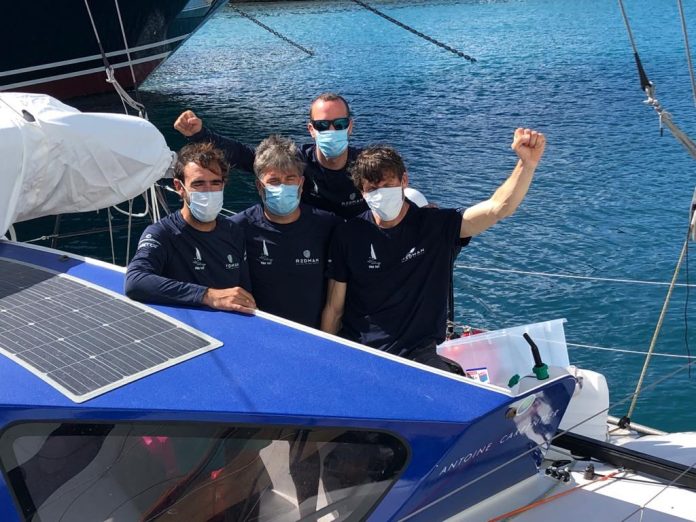 Antoine Carpentier’s Class40 Redman crossed the finish line of the 7th edition of the RORC Transatlantic Race at 04:24 UTC in an elapsed time of 10 days, 18 hours, 24 mins and 13 secs. Despite finishing after Olivier Magre’s Class40 Palanad 3, Redman’s time was still exceptional. Make no mistake, this was a heavyweight contest between two of the world’s best Class40 sailors, both racing fourth generation Mach 40s. Antoine Carpentier has been racing Class40s for 14 years, winning the 2017 Transat Jacques Vabre and class in the 2017 Rolex Fastnet Race.

“This is an amazing race for a Class40,” commented Antoine Carpentier. “It is a great course for me to prepare for the Route du Rhum because the race is almost the same from the Canary Islands to the Caribbean. Interestingly, in this race we had a big problem with seaweed on the rudders, so we are thinking about how to deal with that.

“These new generation Class40s are very fast, especially downwind when you can sail faster than the wind. This extra speed does make it more uncomfortable on board, so it is quite difficult to sleep and eat. Thank you very much to the RORC. I understood that it was very complicated to keep this race going and I am very pleased that you chose to give us the opportunity. To let the race live was very important for me.”

With the high-performance boats all accounted for, attention is now on the remaining boats which are still racing for the RORC Transatlantic Race Trophy. The next boat expected to finish the race will be the first team in IRC Two-Handed. Sebastien Saulnier and Christoph Affolter, racing Sun Fast 3300 Moshimoshi, are expected to finish the race on January 24th. Moshimoshi is approximately 100 miles ahead of Tim and Mayumi Knight’s Pogo 12.50 Kai.

Benedikt Clauberg’s First 47.7 Kali was approximately 850 miles from the finish. Jan Paukkunen sent news from Kali about life on board the boat in the Atlantic Ocean.

“We crossed the midway point and had a small party dinner. The menu was raclette with potatoes and a little wine. The boat is getting familiar for the new team members and performance improvement is clearly expected by team members. The team itself is a mixture of Swiss, Swedish and Finnish sailors. Three different sailing cultures, but boat rules override everything. This is the best place in the world to spend lockdown time!”