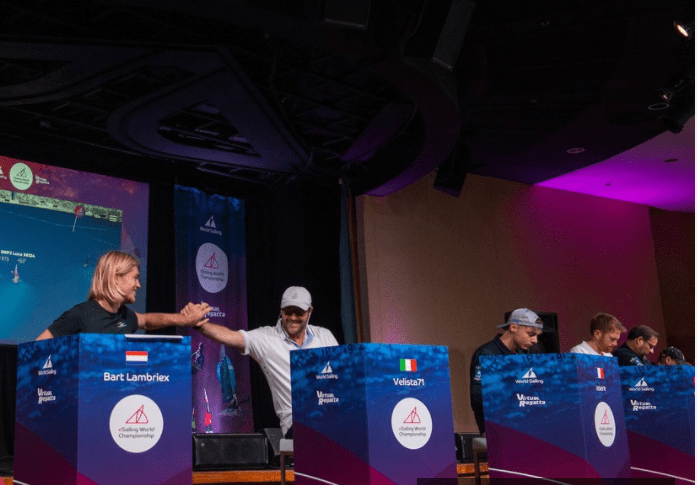 The 2021 eSailing World Championship will be launched today [21 January 2021, 12:00 UTC] as the race to win this year’s title – and a prize of USD $10,000 – officially begins.
Launched in partnership between World Sailing, the International Federation for the sport, and Virtual Regatta, the world-leading digital sailing platform, this year will be the fourth season following the launch of the inaugural Championship in 2018.

All players are now invited to play and compete in the 2021 World Championship on Virtual Regatta Inshore via Desktop, iOS or Android.

Today’s launch starts the season off with the first ever Mount Gay Challenge – a week-long event made up of three days of training, a three-day qualifier and a final.

In 2021, eSailors will experience new venues, more popular boats to sail, and fresh challenges, with extra ways to reach the Final and qualify for the PlayOffs now available.

The number of players in the Final will be increased to 10, reflecting the additional in-game challenges which will now offer a space in the eSailing World Championship Final (date TBC) as a reward.

Three special eSailing event series – the PRADA Cup, SailGP and an Olympic Regatta Series – will run as multiple week-long regattas. Each series champion will be given a place in the Final.

In addition, the number-one player after the end of the rankings in September will win a ticket straight to the Final.

These four finalists will then be joined by the top six players from the PlayOffs (date TBC) – meaning the battle for the USD $10,000 prize will be more competitive than ever!

The winner of each of these weekly regattas will sail straight into the PlayOffs.

The remaining PlayOff places will be taken by eSailors who are ranked in the top 800 by the end of September.

The 2020 Nations Cup saw 13 countries competing head-to-head over one month to crown the best eSailing nation. Great Britain won the inaugural title after a tense finale against Spain.

In 2019, its first year, the eSailing National Championships attracted six nations – this increased to 16 last year, and the aim is to add even more MNAs to this year’s series.

All nations conducting an eSailing National Championship will be automatically entered into the eSailing Nations Cup, and will benefit from 20 VIP passes to distribute, as well as the use of the customisable arena for hosting their semi-finals and finals.

Plus, there will be PlayOff places up for grabs for the top 10 players from each nation involved in a National Championship.

Barbados, Great Britain, Ireland, Italy, the Netherlands and Poland have all launched their National Championship today, and many more are set to join them throughout January and February. Russia, Spain and Sweden will launch shortly, while Hungary will kick off their first ever eSailing National Championship on 15 February.

Elsewhere, there will be plenty of new features for players to enjoy, and two new venues will be added – Bridgetown in Barbados and Largs in the UK – with more to follow throughout the season.

eSailors can already sail the AC75, 49er, Nacra 17, Star, ILCA Dinghy, and the eF50 – the virtual version of SailGP’s F50 – amongst others, in locations such as San Francisco, Sydney, Auckland and Trieste.

Quanhai Li, World Sailing President, commented, “We are thrilled to be launching the fourth season of the eSailing World Championship, the second edition of the eSailing Nations Cup and providing further challenges in partnership with Virtual Regatta.

“World Sailing’s initiatives in eSports have been recognised by the international sporting community and we are continuously evolving and growing the platform to inspire sailors and non-sailors to fall in love with our beautiful sport.

Scott Over, Commercial Director at World Sailing, said, “We are really excited to launch the 2021 eSailing World Championship and are looking forward to a huge year in eSailing.

“This new season structure aims to offer a variety of ways to qualify for the PlayOffs and the Final, and provide eSailors with even more incentives to take part in our Challenges, meaning every week of eSailing will count in 2021.

“We’re also expecting more nations to sign up to the National Championships as well as the Nations Cup, a massively popular addition to the calendar in 2020.

“One of my highlights of last year was seeing the World Championship and Nations Cup Finals livestreamed on the Olympic Channel, which I believe demonstrates just how huge sailing has become in the world of eSports.”

Philippe Guigné, CEO and Founder of Virtual Regatta, said, “We are always looking to add new features and additional ways to engage old and new players around the world, and we believe this season will be the best yet in terms of gameplay and initiatives.

“With the eSailing community always growing, we are looking forward to continuing to work closely with World Sailing to attract more players and ensure our current eSailors are getting the best out of Virtual Regatta.”

Raphael Grisoni, Managing Director at Mount Gay, said, “We were delighted to become World Sailing’s official eSailing Partner in September last year, and the partnership has really exceeded our expectations. We are committed to supporting the growing eSailing community not just in Barbados, where we are based, but worldwide.

“The new structure of this year’s eSailing World Championship, allowing eSailors to have the chance to compete and qualify on a weekly basis, is very exciting – and we’re thrilled to see the inclusion of Barbados as a new venue! It’s great to be starting off the season with the inaugural Mount Gay Challenge, and we’re also looking forward to the continuation of the eSailing Masterclass video series on Virtual Regatta Inshore.”

Facebook
Twitter
Pinterest
WhatsApp
Previous article
The M32 fleet is back racing: Bliksem to Defend Title in Miami
Next article
Bering Yachts lays the keel for the 33-metre B107 superyacht