Azores Ahead are prelude to winning moves 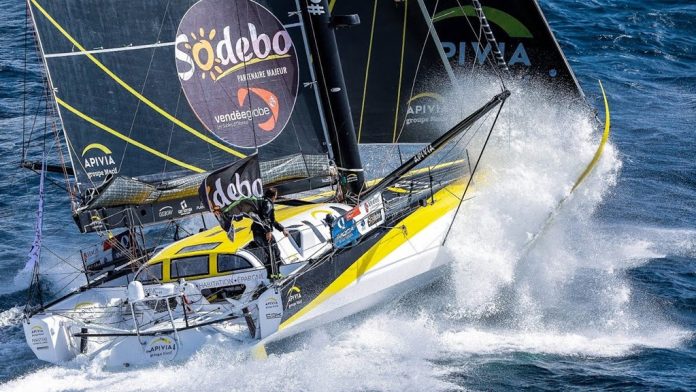 At 350 miles SW of the Azores this morning Charlie Dalin (Apivia) is still proving able to hold off the advance of Louis Burton (Bureau Vallée 2) as they negotiate a key phase looking to be able to transition from the north side of the Azores high pressure into the low pressure train. Burton has been fast coming back from his westerly option, converging into the super consistent Dalin to see their lateral separation dropping all the time to 55 miles this morning.

Boris Herrmann (Seaexplorer-Yacht Club de Monaco) is 90 miles behind Dalin as they approach the island group.
The strategic question of the day is how the timing will play out for a secondary low pressure which is passing to their north, whether Burton with his position slightly closer to it will be able to benefit first and indeed to what extent they will match each other.
As Dalin noted yesterday the distance to the finish and racing time left is similar to that of his speciality to date, La Solitaire du Figaro, the French multi stage solo race which links four legs of between 350 and 650 miles A podium finisher four times on consecutive editions of La Solitaire between 2014 and 2017, Dalin is very much in his métier, strategic boat for boat racing, and able to keep his body and mind functioning well with very limited sleep.
Burton has proven especially adept at pushing his well proven, well set up Bureau Vallée hard and fast, though his choice to the west has perhaps not yielded the gains he might have hoped for.
And Herrmann, challenging for the podium, is sailing smart, minimising the risks and using his speed to stay in contact with the two leaders. Herrmann may be a newcomer to the Vendée Globe – as is Dalin – but has many more ocean miles than any of his nearest rivals. As well as his Class 40 win on the Global Ocean Race, he raced a second lap of the planet on the non stop two handed Barcelona World Race and – as he noted yesterday – has sailed some 30,000 miles with Giovanni Soldini – and sailed on IDEC Sport with Frances Joyon.
“It has not been so easy to get a good angle to get north and so I just put up the big gennaker to soak down to get north a bit further towards the stronger winds that I hope to find a bit to the north, it is not so easy to get good averages with swell from leeward. The boat is no accelerating so nicely all the time. I am getting really excited about the finish, I do have to calm myself down a bit to stay in my normal routine and keep getting good sleep.” Said Herrmann last night.

Behind them Thomas Ruyant (LInkedOut) has been especially quick in fourth with Yannick Bestaven (Maître CoQ IV) and Giancarlo Pedote (Prysmian Group) in the match too on the same line.  Damien Seguin (APICIL Group) remains on the inside of the curve, always sailing the most direct route on his 2007 non-foiling Finot Conq boat which was originally launched as DCNS and sailed in the last race by Eric Bellion.

The top seven will largely follow the same route but the critical phase now is about the passage of the islands – there is a very significant wind shadow to the north of the islands and so perhaps all will pass to the south – to windward, before timing their gybes to the north. If Dalin can be in contact with Burton after the gybe, logically he should be faster on his ‘good side’ with his full starboard foil working, but a lot now will depend on the gybes to get to the entrance to the Bay of Biscay and the timing of the low pressures – now slower and later than predicted – are seeing the leaders getting closer to the influence of Cape Finisterre where we are back into coastal racing mode where there is more maritime traffic, the coastal effects (strengthening of the wind on the Iberian Peninsula, but also soft patches) and the TSS traffic separation scheme, or do they aim for the middle of Biscay to find the front to take them to the Vendée ahead of a solid depression which will mainly profit the pursuers? Tomorrow and the timing and positioning of the gybes will be key.