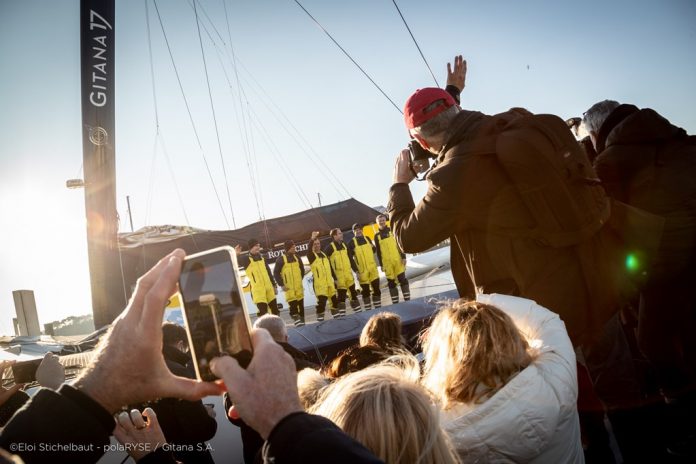 Sailing in the Indian Ocean since yesterday afternoon and their passage of the longitude of Cape Agulhas, the men of Gitana Team were positioned at 48°28 south at 11:00 UTC with a lead of over 860 miles over the record when they informed their shore team of damage to the giant’s float rudder to starboard. After a thorough inspection carried out by David Boileau, the boat captain, the verdict is in. The appendage’s stock is seriously damaged, which means the rudder can no longer be used on this tack. With the six sailors unable to effect repairs in the open ocean as the part would need to be entirely replaced, the crew of the Maxi Edmond de Rothschild has been forced to interrupt its Jules Verne Trophy record attempt. Indeed, it is inconceivable for Franck Cammas, Charles Caudrelier and their four crew to take on the Southern Ocean with a boat that is no longer performing at her full potential. It’s a massive disappointment, as much in the roaring forties as in Lorient, at the heart of the technical base, but the most important thing right now is that the crew is able to head into more hospitable latitudes.

“Everything was going well aboard. We were coming out of what was a tough night, with really heavy seas and a very shifty breeze, but things had improved since our gybe. Franck had just passed the helm to Morgan and a few minutes later there were some odd sensations and more and more vibration at the helm. We noticed that the leeward rudder, our starboard rudder, was moving around a lot from side to side. We brought the boat to a virtual standstill so David could go and look at the back of the float. Unfortunately, he quickly recognised that the rudder stock was seriously damaged. There was no particular impact to report prior to this observation and even though breakages are part and parcel of the history of our mechanical sport, we’re going to need to gain an understanding of what could have happened here. We cannot repair damage like this at sea and we can no longer use our rudder. We’ve raised it and now we’re sailing on port tack with no rudder. We are safe, but we are unable to go fast. The shore team and Marcel van Triest are looking at our options going forward, but one thing for sure is that the current health constraints related to the pandemic are complicating matters. We’ve turned back and we’re now setting a course towards Cape Town, which is around a two-day sea passage from here. In the meantime, we’ll decide whether we’re going to make a pit stop in South Africa or if we’ll make our own way straight back to Brittany.

It’s a massive disappointment for everyone involved! We are so sorry to have to stop here, because we really wanted to bring this Jules Verne Trophy home… for Benjamin de Rothschild, Ariane de Rothschild and all our team.

We’ve had 12 fabulous days aboard with an incredible crew and the Maxi Edmond de Rothschild has really driven the point home that she is a truly exceptional boat.”

Facebook
Twitter
Pinterest
WhatsApp
Previous article
A Mercedes Benz-Inspired Research Yacht? It Had to Happen, Eventually
Next article
Pershing 8X is a winner at the Motor Boat Awards 2021