Four wins, Luna Rossa gains access to the final of the Prada Cup 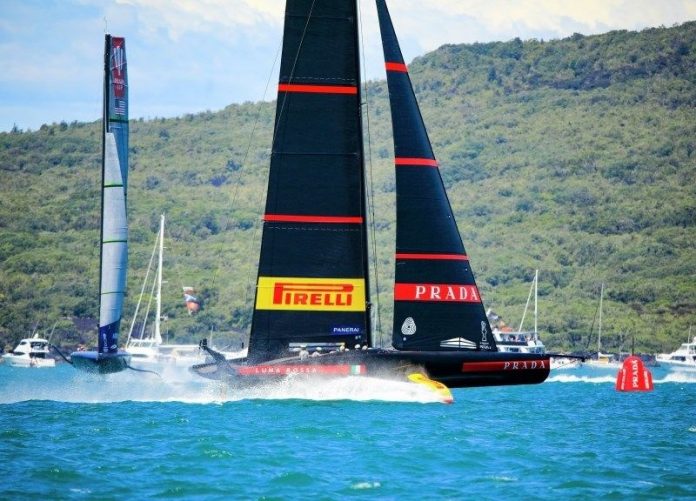 With two more solid wins against NYYC American Magic, Luna Rossa Prada Pirelli gains access to the final of the Prada Cup in which the Italian team will face team Ineos UK, currently undefeated winners in the round robins.
Both regattas of the day took place on Couse A, in the northern area of Auckland facing the Takapuna shore, in very different conditions compared to the previous day. The range throughout the afternoon was between 10 and 12 knots from north / north-west.
In the first regatta Luna Rossa enters from the left side of the entry box and moves straight to the right of the course. The Americans enter from the right and in pre-start are in leeward position. Both boats start on time on starboard tack moving towards the left boundary. Luna Rossa here is windward and can control the American boat. Already in the first beat the Italians start accumulating a lead that will then increase throughout the race, with increasing gaps from the Americans at each gate ranging from 20 to 40 seconds. The first race closes with Luna Rossa crossing the finish line 35 seconds in front of the Americans.
In the second race Luna Rossa wins the start on starboard tack, forcing American Magic to tack back to the right. From the first downwind there is a 100-meter gap, that at the first gate measures in a 45- second delay for the American boat as they round the gate. On the downwind leg Luna Rossa sails flawlessly and shows smooth boat handling. The American boat starts showing technical difficulties that force it to sail out of boundary and take on subsequent penalties. The gap between the two boats increases and the race closes at the end of the six legs with Luna Rossa taking the win with over 2 and a half minutes.
Luna Rossa Prada Pirelli team will be back on the water on Saturday February 13th for the Prada Cup Finals.