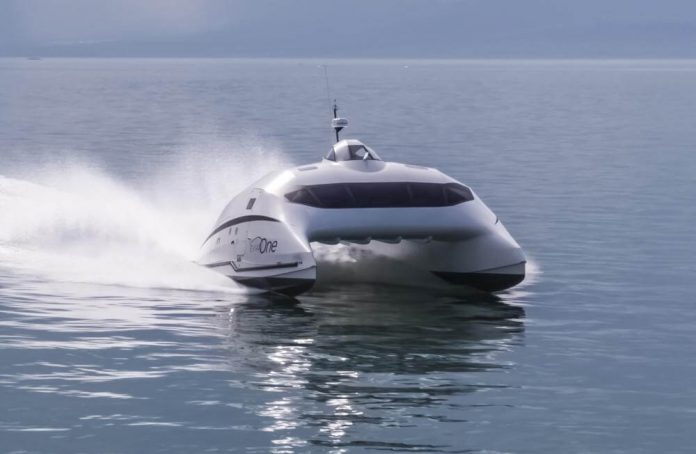 A new high-speed shuttle between Monaco and Ventimiglia has begun sea trials in La Rochelle, France.

The 12 metre power catamaran, named Monaco One, will whisk guests between Port Hercules in Monaco and the new state-of-the-art Cala del Forte marina in Ventimiglia in just 15 minutes. When the route opens later in 2021, it will be the first rapid sea link between the two towns.

The service promises to cement Cala del Forte’s position as a vital and much-needed addition to the Riviera’s limited berthing options, enabling owners, guests and crew to quickly travel between Monaco and their yacht at the marina in Ventimiglia.

Built by Advanced Aerodynamic Vessel, Monaco One can accommodate up to 12 passengers and is ultra-efficient thanks to its unique aerodynamic design which halves typical fuel consumption, even when cruising at speeds of over 40 knots.

Cala del Forte opened for business in November 2020 and was conceived as an alternative superyacht destination along the French Riviera, with Monte Carlo on one side and Sanremo to the other. The marina will be able to comfortably accommodate up to 178 yachts including berthing options for superyacht over 70 metres, relieving the pressure on the busy Port Hercules and Port of Fontvieille in neighbouring Monaco.

The A2V shuttle, superyacht berthing options and Ventimiglia’s own attractions mean that it will be much more than a stop-and-go hub. Shoreside Cala del Forte will feature a safe underground parking lot for 577 cars as well as a selection of 35 high-end shops, and with its fascinating and ancient old town, beautiful beaches, and open-air seaside markets, Ventimiglia is a gem of the Ligurian coastline. This new high-speed shuttle service means that owners and guests can soak in the charms of Ventimiglia as well as the glitz and glamour of Monaco.

Monaco One will be officially handed over to the Ports of Monaco towards the end of February.