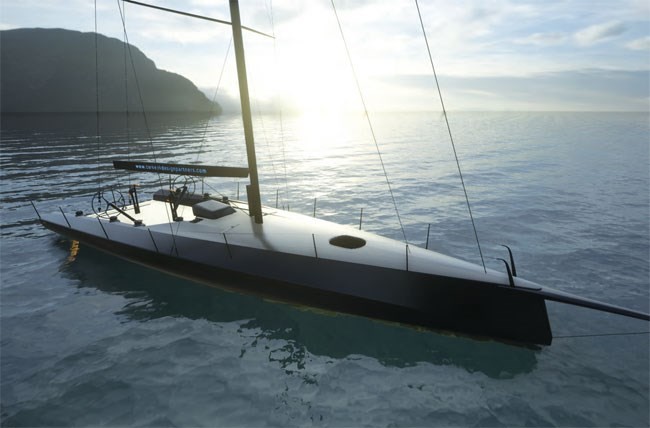 By the time that he began planning the 35th yacht in his Oystercatcher dynasty Richard Matthews had a pretty good idea of what he wanted. One look at the result and whether you want to win the Fastnet or Block Island Race Week we believe others will soon follow his lead

At Fibre Mechanics in Lymington there is a new 50-footer in the making that the UK-based company thinks could spark interest among those interested in a broader range of IRC racing.

Designed by Carkeek Partners, the new CF520 was commissioned by Oyster founder and serial raceboat owner Richard Matthews who had a clear idea of what he was after for Oystercatcher 35.

‘I had a Humphreys 54 a few boats back which we really enjoyed racing, followed by a Judel Vrolijk 42 and a Humphreys 39 which were all good boats,’ he explains. ‘After that I bought Piet Vroon’s Ker 51 Tonnerre which I had for a season. This boat reminded me that I quite like that size because it brings a level of comfort, if you can call it that, to offshore racing. As it happens, I had sold this boat not long after I had bought it, so I knew we only had it for a season, but we enjoyed it that much that it set my sights on another boat of this size.
‘My objective was to create a raceboat for a combination of inshore and offshore racing, events like Ramsgate, Cowes Week, Cork Week along with two or three RORC races during the season and of course the Fastnet. I’ve done 23 and I’d like to do some more. After that, the plan would be to ship it to the Caribbean for the 2022 season, so it is important that Oystercatcher 35 is versatile.’

As you might expect of someone who has built a successful and world renowned company building boats for others while creating his own long list of dream machines, Matthews has been very hands-on with this latest project.

‘As well as the competition afloat, I love the design and build aspects of any racing project,’ he continues. ‘But I’m also very clear about the kind of racing I like doing and the people I want to race with. So, while I wanted to have a 50-footer, I really didn’t like the idea of needing about 15 crew all the time to race it, especially offshore.’

It’s an interesting point and not just from an owner’s perspective. Many a small yacht club has seen reductions in fleet numbers in its local racing with the arrival of larger boats that require a stack of crew on the weather rail.

‘I’m much more interested in sailing with 10-11 crew, which is far more manageable,’ he continues. ‘This was one of the factors that led us to consider water ballast. We have a 510-litre tank on either side in the aft quarter which gives us the equivalent of four people on the rail. This stiffens the boat up by giving you 15 people on the rail when you need them, but when it goes light or if you’re sailing downwind, you dump the water and are 510kg lighter.

‘We don’t know yet how IRC will treat this from a rating point of view, but the reality is that if it isn’t everything we’d hoped for, or it attracts a big rating tariff then we will simply decommission it. It’s not a huge expense and if we don’t use it, we’re not carrying extra weight around.’

But there were other areas that were considered that didn’t make it into the final design, among them powered winches and a lifting keel.

‘I’m not keen on powered winches. You get punished on handicap and I think it takes something away from the physical side of racing. On the other hand, given the shallower waters on the UK’s East Coast I would have liked a lifting keel, but it looked like being a heavy and costly option and one that brought a degree of uncertainty as to whether it would be reliable enough.’

The CF520 is certainly a striking looking machine. Overall, with her aggressively chamfered topsides forwards, a Dreadnought-styled bow and a 2.1m long bowsprit, she has plenty in common at a first glance with Fast 40+ Ran 7 as well as some of the latest Imoca 60s.
The similarity in appearance with Ran 7 is no coincidence, both boats were drawn by Shaun Carkeek.

‘With Ran 7 we set out to design the fastest 40-footer that we could and it’s been particularly rewarding to see her exceed even our expectations,’ Carkeek says. ‘The CF520 is similar in many ways in that we are again looking to take this size of boat onto another level, while at the same time creating a boat that is both versatile in its ability to handle inshore and offshore sailing, as well as appealing to a wide range of owners and crews.

‘We set ourselves an ambitious goal in looking to achieve a boat that was more powerful and lighter than a TP52 and one that was not focussed on simply windward/ leeward racing in flat water.’

One of the key ways in which Carkeek believes this has been achieved has been with the water ballast which allows the boat to be moded in different ways. But he is also quick to point out the additional beam which, at 4.96m is a metre wider than a TP52. This contributes to a significantly more powerful hull, yet without adding wetted surface area. He also points to the twin rudders as being another of the keys.

‘A single rudder may be the obvious choice for an inshore boat, but we did a number of detailed studies that kept confirming that twin rudders provided a design that was quicker across the broad range of conditions that we were aiming for. Having said that, making sure we achieve good balance and feel has required tweaks in other areas of the design that included moving the mast position aft.

‘This has had a circular effect in that bringing the mast back also reduces the tendency for the boat to trim bow down while also allowing the crew to push harder up the wind range. Of course, this is where twin rudders are especially good. The bottom line is that this boat will be lighter, have more stability, a taller mast, more sail area and a more powerful hull than a TP52.’

Meanwhile, her builders also see this as a boat that could mark a new step change for the 50ft scene.