Next finishes Wednesday: United Nations battle to the end on Biscay 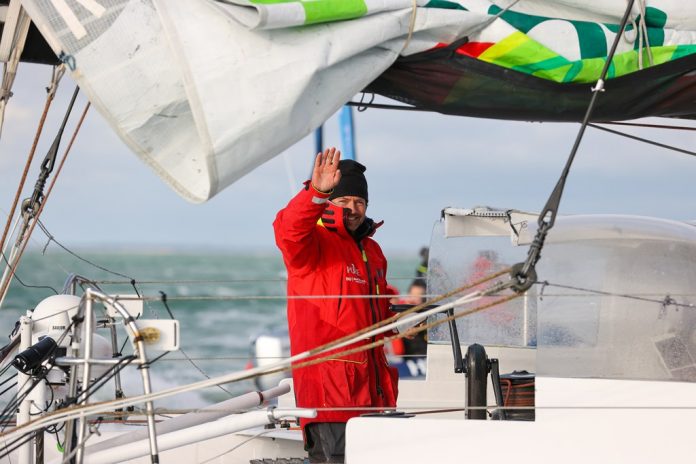 After the finishes on Saturday, Jérémie Beyou in 13th and Romain Attanasio in 14th arriving in Les Sables d’Olonne’s channel at either end of the day, six more skippers are due to finish this week, among them France’s Arnaud Boissières  and Stéphane Le Diraison, Switzerland’s Alan Roura, Japan’s Kojiro Shiraishi, Great Britain’s Pip Hare and Spain’s Didac Costa.

With tired boats, tired bodies and minds, each face their own personal battles to make the final 1,000-1,500 nautical miles to the finish, but all share the same utter commitment and determination. The next five boats are within 100 nautical miles of each other while Hare is about 100 miles behind Stéphane Le Diraison. On her 47th birthday today, Sunday, Hare was in a dilemma after damaging a furler and wrapping a headsail into a mess.

Her primal, competitive urge is to press hard to try and take one more place, to attempt to pass Le Diraison, but her pragmatic, prudent self says stay safe and steady over what promises to be four days of very tough conditions, expecting to see 45-50kts as yet another big Atlantic depression pushes into the Bay of Biscay.

“Certainly, we can feel that they want to get home”, laughs Christian Dumard, the Vendée Globe meteorologist. The group of five is progressing in a north-westerly flow and is at the front of a strong low pressure system.

Only Catalan fire officer Costa (One Planet One Ocean), more than 400 miles behind, is expected to pass behind the centre of the depression. The speed of the group might see them arrive as early as Wednesday.

“We still feel that it’s getting harder but I don’t want to take any risks,” said the group leader, Boissières near to concluding his fourth consecutive Vendée Globe. “I’m being careful but I’m going for it! Alan (Roura) and I were thinking that it would be great to get in during the day after all we’ve been through. What’s more, it will be Saint-Arnaud’s Day! (10TH February).”

Her 47th birthday will be remembered for good reasons and bad reasons. Pip Hare has a super challenging finale to her Vendée Globe:

“The forecast is nothing short of terrible. There is already a lot of wind, gusting 34 knots right now, and it is going to stay like that for the next four days. The system approaching us right now is messy with intense areas of breeze, many changes in wind direction which will result in a terrible sea state and it’s moving fast. Already we have more wind than forecast so I won’t be surprised if we see 50 knots in the next couple of days. The navigation through this is very tricky and I am very mindful of a boat and a skipper who have 90 days of wear and tear under their belts. Just to prove the point that this race is not going to finish with a gentle saunter to the line, I had a two hour battle with my downwind code zero tonight which has left me exhausted and a bit bruised, with a half furled sail stuffed down the forehatch and a furler in bits in the cabin. If I can’t fix the furler then I will have no downwind sails until the finish.”

But, true to herself, Pip is hanging in there. Every day she has a new song every day to motivate her.  This Sunday it was Muse’s ‘Uprising’. And she will be channelling her inner Gladiator after her favourite actor Australian Russell Crowe wished her a happy birthday on Twitter two days ahead of the social networks. “It’s been my week,” she grinned!”

Manuel Cousin: “I am ready to fight”
On Saturday night Groupe SETIN skipper Manu Cousin reported keel ram damage on his IMOCA while racing upwind in the NE’ly trades. The ram snapped and caused collateral damage to the mountings which has not allowed him so far to pin the keel in the central, safe axis

His motivation is enhanced by messages of support from his family and friends, his sponsors but also from other skippers, such as Arnaud Boissières, Alan Roura, Miranda Merron, Clément Giraud, Sam Davies.  Manuel Cousin acknowledges, “It’s heartwarming”.

After returning to sea Isabelle Joschke (MACSF) and Sam Davies (Initiatives Coeur) who are out of the race are two hundred miles apart progressing off the Brasilian coast.