Vendée Globe – Under 800 miles to go, the match goes on 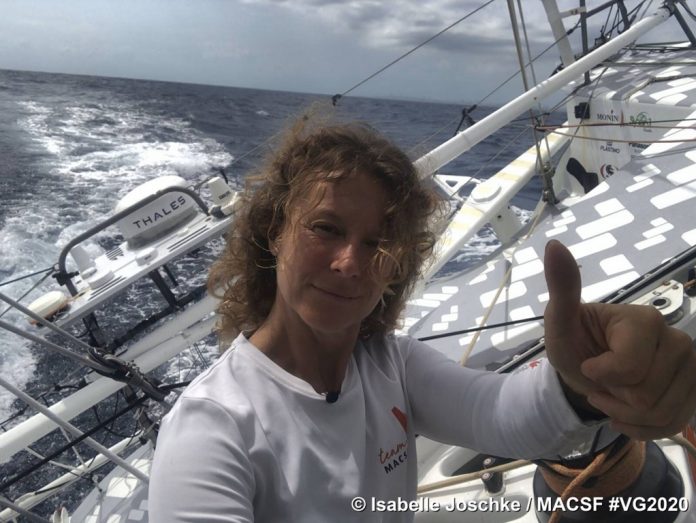 Less than 800 miles from Les Sables-d’Olonne the posse of five international skippers is still fighting towards the finish. “They have to cross a ridge of high pressure today, switch from a South, South-West wind to a West, North-West wind”, underlined Christian Dumard, the Vendée Globe meteorologist.

Arnaud Boissières (La Mie Câline-Artisans Artipôle, 15th) and Kojiro Shiraishi (DMG MORI Global One, 16th) have a slight advantage by being ahead of the front, unlike Alan Roura (La Fabrique), Stéphane Le Diraison (Time for Ocean) and a little further back Pip Hare (Medallia).

“Arnaud sails very well, I don’t know how he does it”, laughed Shiraishi who is loving the close competition he expects to go to the finish line, “This match between the five of us will continue until the line”.

For Didac Costa (One World, One Ocean), more than 640 miles south-west of Arnaud Boissières, the situation is improving: the Catalan sailor looks like he won’t have to get too far into the low ahead of him and can likely miss the second one which will see 50 to 55 knots. Contacted on the radio session this morning Costa explained: “I’m forced to be a little slower, which is obviously frustrating and then I have a few small problems, particularly with my rudder. But I’m hanging in there!”

Sisters in arms
Sam Davies (Initiatives Coeur) and Isabelle Joschke (MACSF), good friends and racing rivals, are progressively meeting up in the South Atlantic after the Franco-German skipper left Salvador de Bahia, Brazil on Friday. The duo both abandoned their Vendée Globe with different kinds of race ending damage to their respective keel systems.  But both are now taking pleasure from the solidarity and companionship that the two will share on the long climb back to Les Sables d’Olonne where they are due in about 20th-22nd February,

Manu Cousin repairing
Last Saturday, Manuel Cousin’s team announced keel damage aboard Groupe SETIN. He has made some partial composite repairs and is still heading north slowly but will get into lighter winds of the Azores high pressure which will allow him to work better and more efficiently. He aim is to block his keel in the central axis.

“Everything is going well,” he assured the race management. “The laminating work is done, it’s drying. “