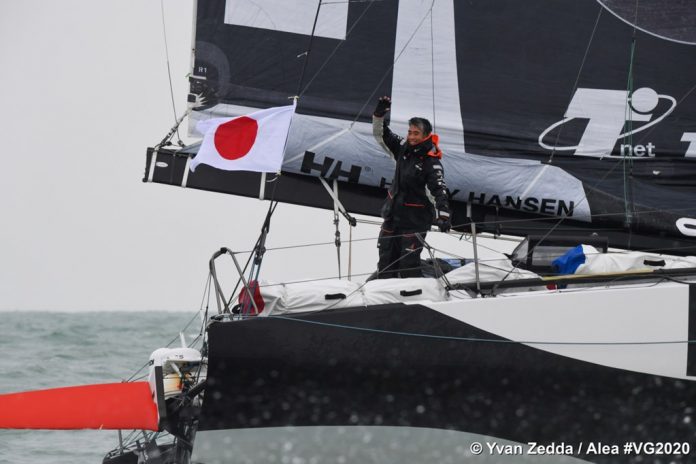 Completing the course is the culmination of a 34-year dream, a major triumph for Shiraishi who spent more than seven days completing major repair to a potentially race ending tear in his mainsail which occurred just six days after the start on November 8th.  Since then, the Japanese skipper has had to sail cautiously to look after his fragile mainsail, always sailing with one reef in the mainsail.

But his patience, positive outlook, mental strength, as well as his 20 years of ocean racing experience, have all contributed to an accomplished race during which he has grown in confidence in his new generation VPLP IMOCA monohull which is a hull sistership to Jérémie Beyou’s Charal.

Like others in the fleet, Shiraishi started his Vendée Globe, short on solo training and preparation miles, his only solo race completed pre-start being the Vendée-Arctique- Les Sables d’Olonne race in which he finished 10th.

“It was truly wonderful, and a longer adventure than originally planned! But arriving and seeing all these familiar faces and people here is really very heart-warming” says an elated Kojiro.  “It is a miracle; I really did not think that my mainsail would hold, and it is truly incredible that it pulled through and I have been able to complete this wonderful adventure. To finish was my primary object objective, but to also please my sponsor, my team and all the fans who have encouraged me throughout is what makes me the proudest.”

Shiraishi’s success today is inspired by the memory of his mentor, Japanese ocean racing pioneer Yukoh Tada, who won Class 2 in the BOC Challenge round the world race between 1982-1983.

As a youngster Shiraishi was so moved by Tada’s exploits after finding his number in the phone directory he spent weeks trying to contact him whilst Tada was working nights as a taxi driver to pay off his racing campaigns.

Shiraishi was invited to Tada’s house, the pair shared some sake and Koji’s first sail was with Tada after which he went on to work as his preparateur.

But during the next BOC race after repeated capsizes and technical failures left him a long way behind the leaders. the 61-year-old Tada took his own life in Sydney in 1991. It was the young Kojiro Shiraishi who was charged with taking Tada’s Okera VIII back to Japan.

This IMOCA 60 is Shiraishi’s fifth Spirit of Yukoh, each named in the memory of his mentor who had dreamed of taking part in the Vendée Globe.

“For over 30 years I have been dreaming of doing this Vendee Globe, ever since Philippe Jeantot invited my master Yukoh Tada to compete in it. It has taken thirty years to complete the circumnavigation and I am proud to have been able to fulfil what Yukoh Tada wanted to do..” Explains Kojiro upon arrival.

Shiraishi is delighted to today have completed the race which Tada had so wanted to do but which he could not find the funding for. Today Koji fulfils a lifelong desire to not just honour but extend Tada’s legacy.  But this successful Vendée Globe skipper is also deeply happy to have massively increased awareness and interest in the race in his native Japan.

Kojiro’s first Vendée Globe ended prematurely on December 4th, 2016 when he lost the top of the mast of his Spirit of Kukoh and had to retire into Cape Town. But even then, he had pledged to return and complete the Vendée Globe.

With the backing of DMG MORI Shiraishi built a new IMOCA from the moulds of Charal, the programme managed by Charles Euverte’s organisation. In the early days of the programme Kojiro’s training dovetailed with Yannick Bestaven on the Maître CoQ with the help of Roland Jourdain as coach.

With his new boat only launched in September 2019 the only IMOCA Globe Series race that Kojiro Shiraishi could compete in was last summer’s Vendée Arctic race. Finishing tenth he qualifies for the Vendée Globe but starts the race knowing he is short on hard racing miles and experience with his boat and so remains conservative in his approach over the first week of racing.

But the damage which will affect all of his race occurs on the fringes of the tropical storm Theta. A failure of his wind sensor caused his autopilot to stall, causing a series of unexpected gybes. His mainsail tears across the upper leech area and four battens are broken. He spends nearly six days at crawling speeds in light winds repairing the mainsail and the battens.

“It was a small feat to have managed to repair this sail,” says Kojiro “Now I will always have to protect it and look after it carefully until the end. But I am determined to make to the finish.”

The delay and the compromised speeds because he is forced to always sail with a reefed mainsail mean he finds himself deep in the second half of the fleet coming into the southern oceans, but first of all he is delighted to pass into the Indian Ocean and then sails a smart, steady and intelligent Pacific, never complaining and nearly always smiling.

“I’m glad the repairs are holding. It’s almost a miracle. On board DMG-MORI Global One, miracles happen every day. It holds up well in squalls, storms and other hazards… Every day I am on the water and sailing, I am the happiest person in the world,” he smiled at the end of January.

And for his patience and dedication Shiraishi is rewarded with an increasingly close and exciting match within a group of five, tussling with Arnaud Boissières, Alan Roura, Stéphane Le Diraison and Pip Hare, a race within the Vendée Globe which engages and inspires the experienced Shiraishi until the finish line. In so doing the pupil, Shiraishi, overtakes his mentor and becomes the first Asian sailor to complete the solo non-stop round the world race, adding to his own sizeable reputation.