Clément Giraud Finishes 21st in the Vendee Globe this morning 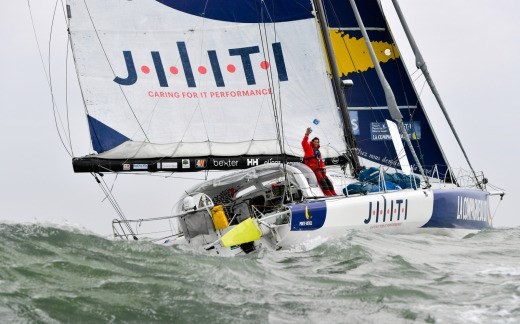 Clément Giraud crossed the finish line of the Vendée Globe this morning at 09:28:21 hrs UTC after 99d, 20hrs, 08m and 31s of racing. Finishing in 21st place on Compagnie du Lit/Jiliti, the 40 year old who grew up in Martinique achieves his original target, breaking the 100 days mark, by a matter of 3hrs and 52mins. But Giraud will be doubly satisfied as he very nearly did not make the start at all. After his boat went on fire just before November 2019’s double handed race across the Atlantic his sponsors withdrew from his project. But he was lent the 2006 Farr design by fellow competitor Erik Nigon and Giraud only finally secured the sponsorships of Compagnie du Lit and Jiliti last September.

Giraud’s sailing background is much more multi faceted than the usual pathway to a Vendée Globe challenge, even if he can still pinpoint the exact moment that– inspired the exploits of Bruno Peyron and Peter Blake – he decided as a 13 year old he wanted to race round the world. From his early days windsurfing on board borrowed from the UCPA (a French outdoor sports holiday organization) he built a huge experience on all kinds of racing craft from bowman on TP52’s Farr 40s and IACC America’s Cup yachts to cruising the Pacific islands with his young family to attempting to cross the North West passage with explorer Sébastein Roubinet., Giraud also finished 11th in the 2005 Mini Transat and raced ORMA multihulls Classic yachts like the Fife 90ft 15M class yacht Mariska, Volvo Ocean Race yachts. He mixes a spirit for adventure with a hard bitten racing ethos and finishes happy to have completed all of his Vendée Globe in ‘race’ rather than ‘adventure’ mode, especially considering his only solo IMOCA races was the Vendée Arctique Les Sables race in July and 2019’s Bermudes 1000 race.

Giraud’s Race
Clément Giraud was highly emotional at the start and keen to thank his team for all their help. “They did a remarkable job and never stopped believing.” Indeed, getting to the start was a long, hard route. A year earlier, as he was about to set sail in the Transat Jacques Vabre, a fire broke out aboard his IMOCA, forcing him to stay ashore and causing his sponsor to pull out of the project. In July 2020, Erik Nigon lent him his boat to take part in the Vendée – Arctique – Les Sables-d’Olonne to allow him to qualify for the Vendée Globe. A month later, Nigon decided not to compete in the Vendée Globe and joined Clément’s team. Just a week before the end of the registration period, his team managed to convince La Compagnie du Lit and Jiliti to support them in their round the world adventure.

72 hours after the start, Clément changed course to avoid the worst of the weather associated with the first front. A few days later, he found himself 1000 miles behind the leaders. However, his goal was above all to complete the voyage. In the next few days and weeks on the route down through the Atlantic, he suffered a crash gybe, had to dive under the hull, deal with a desalinator problem, solve his hook problems and repair torn sails. Just as he entered the Southern Ocean, he was forced to carry out his first mast climb. “I spent 2hrs and ten minutes up there and it took a lot of energy! Even if the seas aren’t that big, to me they seem like mountains given my little experience of the high seas!” When the gusts got up to 47-48 knots, it was new to him, “I have never been through a front like that. I am discovering things. I’m starting to find my feet, but it is stressful.”

On 11th December, he celebrated his 40th birthday in the Forties as he passed the Cape of Good Hope. He passed the next cape, Leeuwin on Boxing Day, declaring that “you have to be crazy to get into a situation like this.” Clément entered the Pacific right at the start of the New Year. He continued to learn and gain from every experience and by the time he was back in the Atlantic, he was clearly enjoying himself.

Before setting sail from Les Sables-d’Olonne, he said he would be happy if he managed to stay up with Manu Cousin. “If I manage to race against Miranda, it would be really pleasing for me.” That is what he managed to do in the Atlantic, racing close to Campagne de France after overtaking Manu Cousin off the coast of Brazil. He referred to the race within the race as the “Atlantic Reaching Cup.”  He continued to push hard, feeling increasingly confident in his boat and his ability and extended his lead over Manu Cousin, before overtaking Miranda Merron.

The stats of Clement Giraud / Compagine Du Lit – Jilti
He covered the 24,365 miles of the theoretical course at an average speed of 10.17 knots
Distance actually sailed on the water: 28,137 miles at 11.74 knots on average

Facebook
Twitter
Pinterest
WhatsApp
Previous article
Arcadia Yachts is announce the sale of the A115 flagship
Next article
Winners: Beneteau Foundation competition about The Modular Sailboat