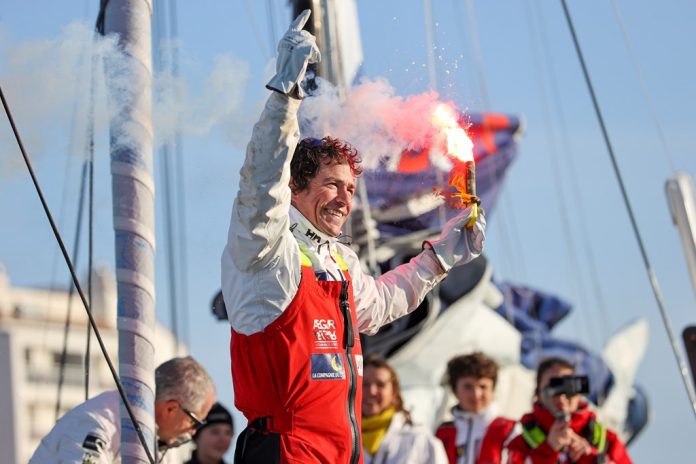 One of Britain’s most experienced and respected ocean racing skippers Miranda Merron is due to finish the Vendée Globe in 22nd place tomorrow (Wednesday), the pinnacle of a 25 year sailing career which has included most of the world’s major challenges.

Cambridge University educated Merron, 51, who lives in Normandy, France turned her back on a career In advertising and marketing to pursued her chosen path, subsequently sailing everything from the crewed Volvo Ocean Race and round the world Trophée Jules Verne speed record challenges to more recently enjoying success in the popular Class 40 fleet, her career best being 6th place in the 2014 Route du Rhum.

Before the start Merron spoke of her simple ambitions, “It would be huge, huge, to finish. It’s a very long way around the world – it really is. Everyone talks about the Vendée Globe as if it’s a racecourse in the Bay of Quiberon. It’s not. It’s really a very long way and it goes to places where mankind simply shouldn’t go.”

Her elapsed time, around 101 days and a matter of hours, places her somewhere between the 90 days time for her Owen Clarke design when sailed by Dominique Wavre and some six days faster then the 2016-17 time of American skipper Rich Wilson who completed his second Vendée Globe on this boat in 107 days.

French skipper Clément Giraud crossed the finish line of the Vendée Globe this morning at 09:28:21 hrs UTC after 99d, 20hrs, 08m and 31s of racing. Finishing in 21st place on Compagnie du Lit/Jiliti, the 40 year old who grew up in Martinique achieves his original target, breaking the 100 days mark, by a matter of 3hrs and 52mins. But Giraud will be doubly satisfied as he very nearly did not make the start at all. After his boat went on fire just before November 2019’s double handed race across the Atlantic his sponsors withdrew from his project. But he was lent the 2006 Farr design by fellow competitor Erik Nigon and Giraud only finally secured the sponsorships of Compagnie du Lit and Jiliti last September.

Giraud’s sailing background is much more multi faceted than the usual course to a Vendée Globe challenge, even if he can still pinpoint the exact moment that– inspired the exploits of Bruno Peyron and Peter Blake – he decided as a 13 year old he wanted to race round the world. From his early days windsurfing on board borrowed from the UCPA (a French outdoor sports holiday organization) he built a huge experience on all kinds of racing craft from bowman on TP52’s Farr 40s and IACC America’s Cup yachts to cruising the Pacific islands with his young family to attempting to cross the North West passage with explorer Sébastein Roubinet. Giraud also finished 11th in the 2005 Mini Transat and raced ORMA multihulls Classic yachts like the Fife 90ft 15M class yacht Mariska, Volvo Ocean Race yachts. He mixes a spirit for adventure with a hard bitten racing ethos and finishes happy to have completed all of his Vendée Globe in ‘race’ rather than ‘adventure’ mode, especially considering his only solo IMOCA races was the Vendée Arctique Les Sables race in July and 2019’s Bermudes 1000 race.

When they return to dry land after some three months at sea the sailors are physically and mentally exhausted and need to recover, get some real sleep and return to normal life. They have lost weight, they often feel out of touch with the realities of life ashore, but at the same time many are already hankering after the dream of doing it all again. Jean Yves Chauve, the Vendée Globe doctor since the first edition back in 1989, examines the state of the competitors.

“Since I got back, I keep waking up thinking I failed to hear the noise from the sensors and alarms,”  Benjamin Dutreux a few days after he finished. The days and nights for the skippers after their return ashore are full of ups and downs, showing how tired they really are. For several weeks, they will have to deal with feeling exhausted and that may continue for up to six months. “The body really suffers. But it is the mental stress that is more important than the physical pains,” stressed Jean-Yves Chauve.

Really you can see how much they had been through just by looking at their faces on the pontoons or seeing how unsteady they were on their legs or how thin they had become. “Some have lost up to a stone. They now need to get their body back in balance, working on their legs, which have not worked hard and their upper body. I can see lots of small injuries, bruises, fractured ribs because of the violent knocks they have received to their back,” added the Vendée Globe doctor. As recently as yesterday, Alexia Barrier sailing to the west of the Cape Verde Islands sent back a video explaining how she had had a violent fall. “Alexia has probably injured her ITB transverse band (where the muscles are attached to the spinal column – editor’s note). There isn’t any treatment, but it can be very painful,” commented the doctor, who talked to the sailor.

An exceptional lifestyle in extreme conditions weakens the defences

“On top of that the sailors have to deal with land borne viruses and that is even more the case this year. The body’s defences are weakened, as they have not been exposed to any diseases, living in what is practically a sterile environment. “They will be weak if they encounter Covid 19, but also other viruses. We have seen many respiratory ailments, because the body has to learn how to deal with bugs and viruses.” added Jean-Yves Chauve, who has also noticed hearing problems. “This is due to the constant slamming and banging against the carbon hull which amplifies the noise. They feel mentally exhausted and it is quite common to experience tinnitus.”

The return to dry land means it is time for the warriors to rest. This rest is necessary if they want to race again, and they all say they want to do this all over again. It is as if they were addicted to the Southern Ocean, probably because they have discovered things deep within themselves, which remain unseen in normal daily life. “It’s amazing how they completely wipe the hard moments from their minds,” concluded Jean-Yves Chauve.