HomeEventsRegattaBack to land, next is Cousin the 23rd skipper on this Vendée...
EventsRegatta

Back to land, next is Cousin the 23rd skipper on this Vendée Globe 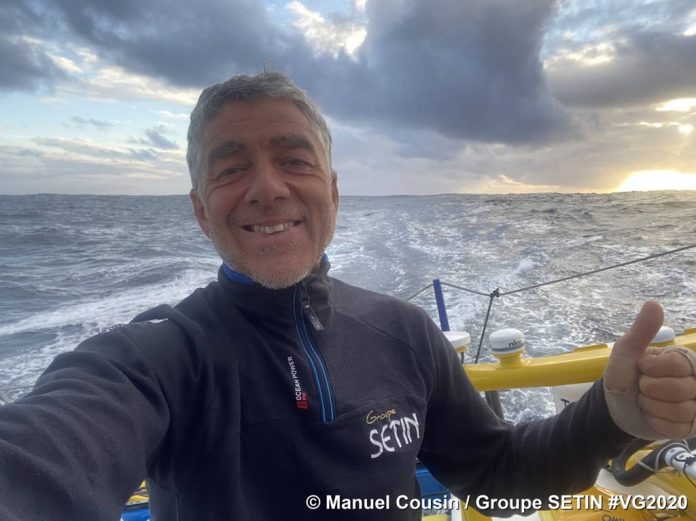 Manuel Cousin, the 52 year French skipper who retired from his role as an executive with the Toyota motor group to pursue a career ocean racing will bring his Imoca Groupe SÉTIN across the finish line of the Vendée Globe tomorrow morning – estimated for between 0500hrs and 1000hrs UTC – and return back into Les Sables d’Olonne the town where he has lived for 12 years.

Cousin will be the 23rd skipper on this 9th Vendée Globe and it will be an arrival that promises to be quite emotional as he has struggled regularly with serious technical problems with his rudder and keel which have threatened to force a premature end to his race. He cracked his rudder in the Indian Ocean and snapped a keel ram in the north Atlantic and has largely nursed his boat to the finish line since then.  But even though he has had to still deal with a couple of big low pressure systems, again sailing today in 35 plus knots of wind, Cousin is enjoying the final 24 hours of his race.

In coming to the Vendée Globe from a professional career outside of sailing – albeit many years since thanks to the unfailing support of Groupe SETIN for ten years – Cousin has a lot in common with Ari Huusela, the Finnish airline pilot who is 25th and bringing up the rear of the fleet. Huusela, 57, will return to flying long-haul after recovering from his Vendée Globe epic. On a ‘once in a lifetime’ Vendée Globe challenge, Huusela finds himself in two minds – wanting to carry on enjoying every last day – but at the same time becoming increasingly frustrated that the weather systems are conspiring against him and with that his ETA keeps slipping.

“Mentally it has been quite hard recently, I have been struggling mentally with these things these last three days, sometimes it is very depressing after two days of sailing that your ETA is still two or three days more sailing than expected. It feels like getting to the finish line is a never ending story. It would be nice to be back on dry land, especially now when all the others are there. But I am not in a hurry, I just try to concentrate on these moments and enjoy these days. The weather has been quite nice since yesterday, the waves have not been too bad. Now it is quite good, light conditions and I will try to enjoy it, with a nice sea state.”

Huusela’s big bonus that is adding to his motivation is that his sponsorship programme with Stark a leading Finnish building materials company has just won two awards in a national marketing and sponsorship competition.

Meantime Sam Davies and Isabelle Joschke, sailing outwith the race, are due back in Les Sables d’Olonne next Tuesday both having slowed down last night to let an Atlantic depression pass in front of them.