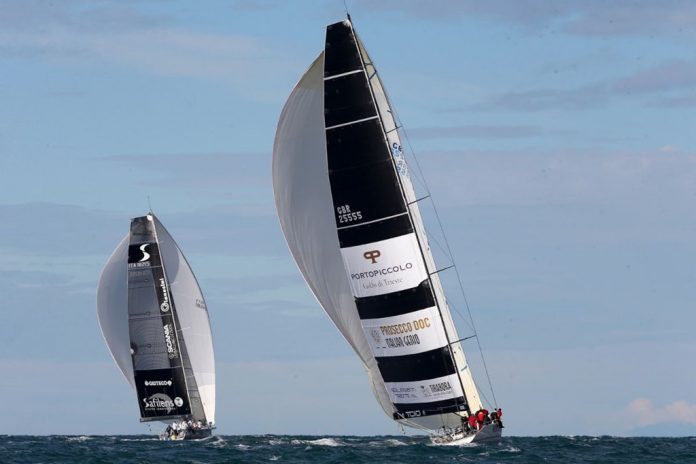 The 2021 sailing season presents itself with a novelty dedicated to maxi sailing. Maxi Yacht Adriatic Series (MYAS) is the name of the new circuit that arises from the close collaboration between two cities such as Trieste and Venice with the aim of further expanding the racing field to other locations in the near future.

A synergy, the one proposed by the Adriaco Yacht Club, whose invitation was addressed to two fundamental realities of sailing, not only local as the Nautical Society Pieta Julia of Sistiana (association founded in Pola in 1886) and the Compagnia della Vela of Venice. A collaboration that has led to the uniting, in a single circuit, of four of the most important and historic inshore and offshore regattas in the Adriatic area for the maxi fleet. A format that wants to enhance even more the commitment of both the owners and maxi teams and the organizers of the individual regattas whose participation numbers are constantly increasing.

A new circuit that takes place temporally in the period between the end of September and the end of October, placing itself as a further offer of competitions for the maxi season which, historically, takes place in the Tyrrhenian and Mediterranean from May to September.

The first appointment is represented by the oldest offshore regatta in the Adriatic, the Trieste – San Giovanni in Pelago – Trieste (scheduled for the night between Friday 24 and Saturday 25 September) organized by the Yacht Club Adriaco. The regatta, which touches the waters of three nations, is presented in a special edition to celebrate its sixtieth anniversary.

The second stage of the Maxi Yacht Adriatic Series will be scheduled on the first Sunday of October with the very classic Bernetti Trophy of the Pietas Julia Nautical Company, an event now in its fiftieth edition (since it was named in memory of the President of the Club Guido Bernetti) but which saw the first edition of this same regatta took place four years earlier.

The second edition of the Trieste Venezia – Two Cities One Sea Regatta (organized by the Yacht Club Adriaco with the logistical collaboration of the Yacht Club Venezia) will not only serve as an ideal connection point between the two seaside cities and will mark the passing of the baton at the decisive stage , the one scheduled for Sunday 17 October with the Veleziana (edition number 14), the regatta organized by the Compagnia delle Vela.

All the regattas of the MYAS circuit will be held with a compensation formula with identical coefficients between each single regatta.

Alberto Leghissa – helmsman of Anywave Safilens – “We are happy to see how our Gulf continues to be always very active in promoting sailing and consequently the commitment of teams that have always believed and continue to invest in maxi regattas. . The new MYAS circuit enters our competitive calendar by right and we can’t wait to compare ourselves with all our rivals in a month of great events through a compensation formula that allows everyone to demonstrate, at best and without compromise, their own value.”

Furio Benussi – helmsman of Arca SGR – “My team can only support the will and vision of those who wanted to give life to this synergy between three great Yacht Clubs in the interest of all the protagonists of the regattas and not least of the public . A maxi challenge is something very demanding in every respect; knowing that the work of the maxi teams, which lasts 365 days between construction site, budget management, planning and logistics can now be further enhanced in terms of organization, communication and promotion by locations and Yacht Clubs, can only gratify us and offer further stimulus to do even more. It is a bar that continues to rise for everyone and which as such can only do good for our whole world ”.

Piero Fornasaro De Manzini – President of the Adriaco Yacht Club – “Sailing continues to live and grow with different impulses that arise primarily from the sailing teams that dedicate themselves throughout the year to preparing their own challenges. A scenario in which the Yacht Clubs do not have to remain spectators but have the burden of supporting and supporting the sailing system as far as they are concerned; in this case the world of maxi racing yachts which represent one of the many expressions of our sport. The Yacht Club Adriaco believes in this mission in parallel with what it does by investing in the new generations, starting with the sailing school and youth teams. A commitment that is common to that of many other associations.

Gianfranco Zotta – President of the Pietas Julia Nautical Society – “Three clubs that think and experience sailing in the same way could only join forces in a common project that is aimed primarily at those who believe and invest directly in taking part as a protagonist in our regattas . This will also be a precious opportunity for comparison and further growth for all parties on the field, whether they are racers or organizers. We therefore undertake this new path with great interest together with those who are the most professional and performing teams not only in our Gulf. “

Pier Vettor Grimani – President of the Compagnia della Vela – “Two big cities like Trieste and Venice are now even closer in the sign of great sailing. Our Club immediately accepted the invitation to become part of this format with the Veleziana, our regatta that continues to grow with each edition. An invitation that gratifies us because it offers even greater relevance and participation in our regatta and leads us to collaborate with realities that deeply love our sport. Yacht Club friends who, even in a particular moment like this, never stop working and think about how to always guarantee new energy to sailing “.