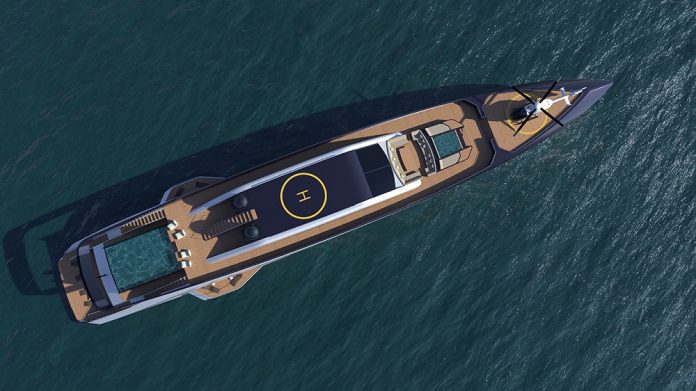 “Creating” is a bit of a stretch in this case. Here is a new concept of a superyacht, which, as is standard with these things, aims to revolutionize the industry, shake up established norms and deliver the most perfect (a fallacy, we know), most luxurious, and most gorgeous superyacht.

Crossovers are a thing in all industries: you have actors who become singers, singers who turn to directing, and businessmen who star in movies. Closer to home, you have carmakers trying their hand at two-wheelers of various shapes, sizes, and motorizations, or legit haute couture creators designing bicycles.

As of late, many crossovers are also happening in the yachting industry, and they’re very surprising: popular Instagrammers are designing their own concept superyachts. The idea is preposterous to some, stupid for many, and awesome to fewer, but the point is that industry watchers are paying attention. If they are, then probably so are the billionaires and gazillionaires of the world, so it could be a matter of time before one such concept crosses the threshold into reality.

We couldn’t possibly tell if it will happen with this one, but here it is: Boss. Despite the brash moniker, this superyacht is actually an elegant proposition, coming from Charly Phitoussi of the Prestige Yachts channel (which is completely unrelated to the shipyard of the same name, as far as we can tell) and yacht designer Julien Cadro. It lives on virtual paper only, for the time being, and aims to be the perfect blend of elegance and sportiness, with a massive dose of ultra-luxury on the side.

Measuring 80 meters (262 feet) and sporting a design inspired by architecture, Boss has three dedicated decks and is meant to sail the Mediterranean. The fast displacement hull ensures all guests arrive at their destination in due time, whenever they’re in a hurry. The sleek silhouette and sharp bow also render the impression of speed, but neither of the two mention anything about propulsion or, for that matter, range.

As with the other influencer-designed superyacht we discussed on another occasion, the Mogul, this one too is heavy on luxury amenities. Boss has not one but two helipads, offering guests the chance to drop by and leave without raining on everyone else’s parade. It also has an infinity pool that starts on the sundeck and flows down to the upper deck.

The sundeck itself is described as an area perfect for relaxation. Not that guests will be doing any kind of work elsewhere, but bear with us. Besides the pool, there’s also an outdoor dining space and a bar, proposing guests all manners of activities while taking in the beautiful views. A suspended balcony is visible on each side, which can be used either for tanning or more – you guessed it – relaxation.

Another area here, effectively dubbed the “relaxation area,” can serve either as an open air cinema or a live concert stage. One assumes it could be outfitted either way (or even both), provided an owner came along to actually commission this superyacht to be built.

“The yacht also features a lounge area located in front of the wheelhouse and a Jacuzzi surrounded by a lounge/sunbathing area,” Phitoussi writes on Instagram. “At the Sundeck level, this yacht can accommodate two helicopters, one located near the bow and one above the wheelhouse.”

A sizable beach club aft comes with two glass doors that allow guests to store more water vehicles on board when needed.

As noted above, no mention is made of the kind of power the Boss would develop or its estimated range. Accommodation is also only vaguely touched on, with Phitoussi saying there’d be an owner suite and VIP suites. That is hilarious because of course both these types of suites would be there.

Still, this is a first effort at creating a dream floating palace. You decide if it’s a good or bad one.