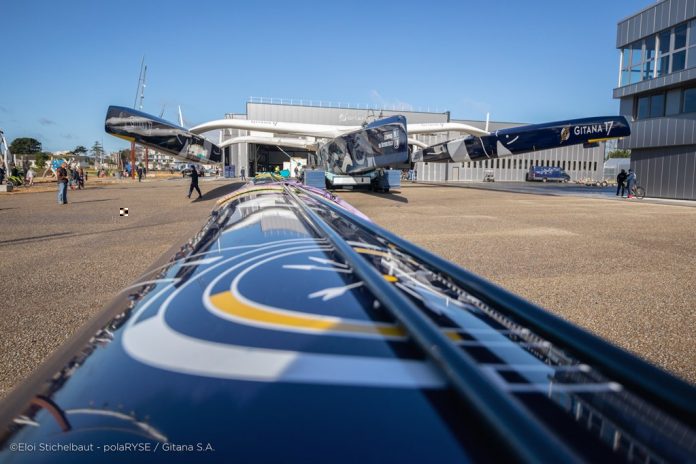 Having returned to Lorient a fortnight ago, after her Jules Verne Trophy attempt was cut short due to the breakage of a float rudder, it’s now time for the Maxi Edmond de Rothschild to go into refit. As a result, the week is kicking off with the platform being hauled out and transferred to Gitana Team’s technical base, just a stone’s throw from the Cité de la Voile Eric Tabarly. In this way, the 32-metre giant will join her appendages and mast, which the team has already been working on for several days. The rhythm of the competitive seasons usually translates as a winter refit or a winter break but this year, the Jules Verne Trophy schedule means that Gitana Team will be undertaking a spring refit! It should last a little over three months and will largely be devoted to a complete overhaul of the Maxi, along with a repair of the appendages and the implementation of a series of optimisation processes made possible thanks to the experience gained during the round the world attempts and the accompanying 40 days spent out on the water in race format.
The Jules Verne Experience

With the haul-out effectively bringing an end to the sailing team’s season out on the water, back on land we are already well into the next season this February so it is a fine opportunity for Charles Caudrelier, one of the two skippers of the Maxi Edmond de Rothschild, to draw up a quick assessment of the Jules Verne, which is the first round the world record campaign for him and for all the five-arrow team: “We certainly feel a sense of frustration about returning without the Trophy, but it remains the team’s goal and the two experiences we had in 2020-2021 taught us a great deal and will be invaluable going forward! The two crewed sea passages lasted nearly 40 days if we count both our winter attempts and they have enabled us to further our understanding and our management of offshore flight.

We are unquestionably making faster headway, we now have some long phases in excess of 40 knots and inevitably in attaining these higher speeds, we’re still learning a great deal. All in all, we had quite heavy, sloppy seas during our second attempt. We were lacking flying time in those conditions so we were able to collect a lot of information about how the Maxi handles and refine our polars, which is essential going forward and for making further gains in terms of on-board performance”, assured Charles Caudrelier, before going on to discuss the crew of the Maxi Edmond de Rothschild.

“Franck and I made the decision to set sail as a six-man crew and in human terms, whether it be at sea or during the stand-by phase, which wasn’t the easiest of situations to deal with, the group was great. We all have fairly different profiles, but this diversity made the experience all the richer and everyone had something to bring to the table. For example, David Boileau, the boat captain, shared his very significant technical expertise with us, giving the team an insight into the inner workings of the Maxi, which is especially valuable for me with a view to sailing the boat singlehanded. Each member of the crew is very versatile, even though they each have their chosen field, and the group worked fantastically well and we’ve also evolved together. This same crew will certainly be in a position to head offshore together again”, admitted the sailor.

With a scheduled relaunch in early June, the duo at the helm of the Maxi Edmond de Rothschild will have a few weeks to prepare for the sports events lined up for the coming year, or at least those currently on the schedule. The first of them, the Rolex Fastnet Race in early August, will be an opportunity for the six members of the Jules Verne Trophy crew to get back together, whilst the second major race meet, the Transat Jacques Vabre, will see Franck Cammas and Charles Caudrelier heading to Le Havre for the race start on 7 November. Both races are due to carve out a new route to a new finish destination this year. Indeed, for the first time in its history, the finish of the legendary Fastnet will be decided in Cherbourg rather than the traditional Plymouth venue. In the Transat Jacques Vabre, it’s in Martinique rather than Brazil or another Latin American country, where the multiple class fleet will celebrate the end of the race. In addition to this significant change, the organiser is also proposing a variety of courses adapted to the different sizes of the four main classes competing in this 2021 edition of the Coffee Route (Class40, Imoca, Multi50 and Ultims).

“Our boats are designed for record attempts and our Jules Verne Trophy attempt confirmed that. However, we are fortunate in that we have versatile craft, which means we can switch from one mode to another according to the seasons. We are delighted and thrilled at the prospect of getting back into race-regatta mode in 2021. The Transat Jacques Vabre will certainly have the competitive appeal we’re after, with the notable arrival of the new Ultims from Banque Populaire and Mer Concept too hopefully. The revamped course is particularly fine and though it’s never just a formality to sail our giants in double-handed configuration, it will still be a sprint so we’re going to have to really push the boats. Today, with the Maxi Edmond de Rothschild, we have one of the ‘oldest’ platforms in the fleet, which is a considerable asset to our mind. The boat was ahead of her time in my view and even though the new Ultims – which have been greatly inspired by the Gitana 17 platform – will be formidable, we have experience and maturity on our side. We’re fortunate to benefit from a boat, which has broken the mould, is of noble birth and whose capacity for progress is still vast. This is heightened by the fact that at the start of the Transat Jacques Vabre, the boat will benefit from brand-new appendages with regards foils, rudders and a centreboard with an elevator. These changes have long been an intention and are in line with the Maxi Edmond de Rothschild’s optimisation programme”, concluded Charles Caudrelier, who is as enthusiastic as he is eager about what lies ahead of the bows of the five-arrow giant.

– Départure on sunday 8th of august 2021, from Cowes
– Arrival at Cherbourg

– Départure on sunday 7th of november 2021, from Le Havre
– Arrival in the bay of Fort-de-France, Martinique.