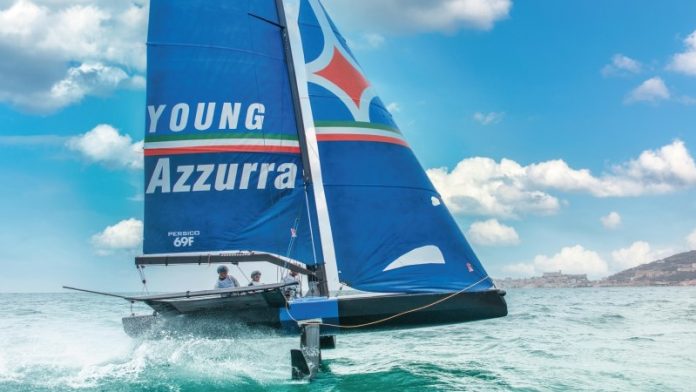 The Youth Foiling Gold Cup will be the first international event of the year for the Young Azzurra team, the sporting project launched by the Yacht Club Costa Smeralda in 2020. The first of three legs will take place in Gaeta starting on 3 March, with the remaining events scheduled for Lake Garda and Hong Kong in August 2021 and January 2022 respectively.
﻿
The competition, which takes place on board Persico 69F one-design foilers and is reserved for sailors under 25 years of age, was created as an alternative to the Youth America’s Cup which was cancelled in 2020 due to the pandemic. The initial qualifying phase will run through 8 March, and will be followed by the finals from 10 to 12 March.
Young Azzurra will be the only team representing Italy in this regatta and will face the same seven teams that were set to participate in the Youth America’s Cup, hailing from Hong Kong, the Netherlands, Norway, Spain, Switzerland and the USA.
﻿
The YCCS crew – composed of skipper Ettore Botticini, flight controller Federico Colaninno and two mainsail trimmers who alternate on board, Francesca Bergamo and Erica Ratti – concluded their third training session with coach Enrico Zennaro last week in preparation for the event.

Young Azzurra training in Gaeta with the new branded sails

The Commodore of the Yacht Club Costa Smeralda, Michael Illbruck, commented: “With the recent America’s Cup races we have seen once again how thrilling sailing can be. We’ve also heard the name Azzurra talked about a lot, the first Italian challenge for the most important sailing competition in the world, launched in 1983 by the Yacht Club Costa Smeralda. The Young Azzurra sporting project, aimed at talented young Italian foiling sailors, was created as a continuation of that experience and the story of Azzurra. In 2021 our team will take part in various sailing competitions, starting with the Youth Foiling Gold Cup. Given the very high level of the teams enrolled, I’m certain that we’ll get to watch a spectacle bringing together the speed of these innovative foiling monohulls and tough competition among the crews.”
﻿
Ettore Botticini, skipper of Young Azzurra: “Last week we completed our third training session since the beginning of the year. We tested the boat and the new sails in various weather conditions and we trained on new manoeuvres giving Francesca and Erica, the team’s two mainsail trimmers, more tasks on board. The team has focused a lot on training ashore in order to handle the fatigue and physical stress. This will be a very intense period, a bit like a marathon, but we are ready to get on the water and do battle from the get -go!”