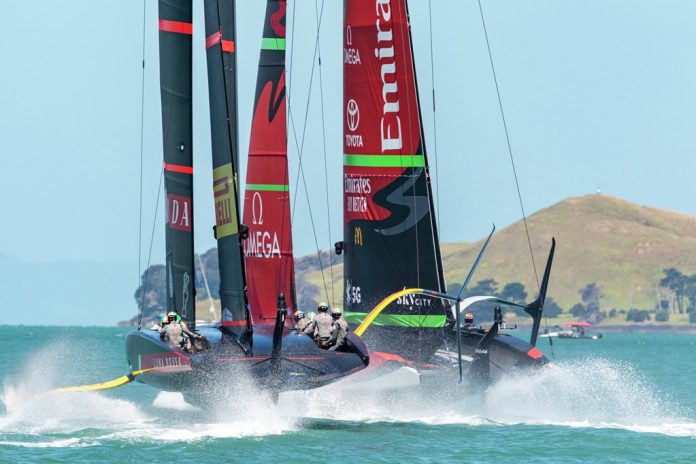 The period between the Prada Cup Final and the start of the 36th America’s Cup Match Presented by Prada was always going to provide time for Emirates Team New Zealand and Luna Rossa Prada Pirelli to reflect, tweak, train, and optimise. And while the recent Covid Level 3 restrictions in Auckland have added some temporary uncertainty into the schedule, for the teams the break has simply added four days into programmes that have been running for almost four years. While both have been tight lipped about their plans for the next few weeks, it is clear that neither has been spooked by the delay.

So, while both teams have been able to continue and extend their preparations, both also had to work to a deadline that didn’t shift and submit detailed declarations last Monday as to the specific configurations of their boats With the boats now locked down, the focus for their training has now shifted.

In contrast to the big changes that were seen throughout the America’s Cup World Series and the Prada Cup, changes that often resulted in big steps forward in performance, now with the Match just days away making major modifications could risk undermining previous performance improvements.

Pause for providing time for ENTZ and Luna Rossa to reflect

Instead, it is more likely that both will be working on the tactical, boat handling and race strategies.

Indeed, co-skippers Jimmy Spithill and Francesco Bruni have been candid about the gains that their team made through their improved communications. Improvements that were easy to see from the outside.

This was particularly noticeable in the Prada Cup Final where the dialogue between Spithill, Bruni and their mainsheet trimmer Pietro Sibello who grew into his new position as tactician gained momentum with each race. Day after day, even when they had started behind, the on-board audio within the brains trust at the back of the boat confirmed the calm and clinical execution of tactics that won them seven of their eight races.

Looking ahead to the Match this will no doubt be one of the key focusses for the Defenders who, in the early stages of the road to the Cup, had previously shown that communication was sometimes a weak point for the team. From a narrow miss at the windward mark to confusion during the pre-start, if the Kiwis have an Achilles heel, it has been with their comms.

Alongside the close performance profiles of the boats so far, this has led to speculation that the starts may define the 36th America’s Cup which in turn has led to further comment on which team has the upper hand.

But even here, comparisons are difficult to make. In the 35th America’s Cup in Bermuda aboard the AC50 foiling cats, the reaching start and downwind second leg delivered a drag race style opener to each race. The 36th America’s Cup sees a return to upwind starts aboard monohulls with more conventional match racing tactics, albeit at speeds that have more in common with ice yachting than waterborne craft.

Understandably, with considerably more match racing experience including a world title in 2005 along with six previous and consecutive America’s Cup campaigns, the bias has gone towards Spithill whose nickname ‘Pitbull’ has been in part down to his ruthless starting technique.

And while Spithill has also tasted both victory (twice) and defeat in the America’s Cup as well as representing both the challenger and defender, this time the experience level has been raised even higher with the addition of Francesco Bruni as co-helmsman.

Aside from his key roles in five America’s Cup campaigns the Italian also brings significant match racing experience too which have both been key factors in developing the dual helmsman role.

Pause for providing time for ENTZ and Luna Rossa to reflect

Meanwhile, aboard Emirates Team New Zealand Peter Burling’s deft touch with high speed, time on distance approaches to the start line draws a great deal from his six world championship titles and two Olympic medals in the 49er where speed, timing and feel are some of the essential ingredients for success. With his former 49er crew Blair Tuke in a pivotal role on board the AC75 combined with the calm collected experience of 17 time world champion, (all in high performance cats), Glenn Ashby, accurate timing and finessed boat handling comes naturally to this trio.

Comparing both teams’ background experience and success it is difficult to imagine a more impressive line-up of sailing heavyweights and accomplishments.

But at some point, one team will have to win through, a draw is not an option and as the well known Cup expression goes, there is no second.

So, will match fitness play a part? If it does then Luna Rossa has the upper hand having sailed more races than any other Cup team. If this is the level by which the 36th America’s Cup is defined then the Italians have a clear advantage.

But as we’ve seen both in the build-up to this event and in the 35th America’s Cup in Bermuda, boat speed can make you appear to be a tactical genius. Winning the starts may be one thing, but if your boat is significantly faster and the team has confidence in this, the focus and tactics can be more about starting cleanly and keeping your powder dry for the point at which you can put your foot to the floor. Here, if the rumours are correct, it is the home team that has the upper hand. Plus, the rumour mill has been working overtime when it comes to the home team’s performance in light weather with talk of a code zero forming part of their declared sail wardrobe.

So, as the clock counts down to the start of the 36th America’s Cup Presented by Prada the event hasn’t been short on topics of conversation, speculation and an opportunity to pause for thought.

Day 5 of the America’s Cup was without a doubt the most heart stopping of the 36th America’s Cup. After four days...
Read more
America's Cup