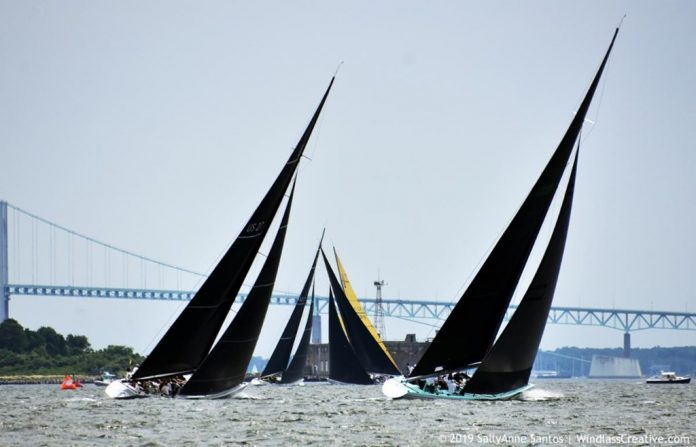 The 12 Metre Yacht Club (12MYC) is excited to announce the release of 12mR: An Enduring Legacy. Filmed during the 2019 12mR World Championship in Newport R.I., highlights include racing footage and competitor interviews paired with the experienced insights of the 12MYC’s Station Steward Gary Jobson who also wrote and narrated this documentary.

From July 8 – 13, 2019, twenty-two 12 metre yachts and more than 300 world-class sailors representing six countries converged on Newport to compete at the 2019 12mR World Championship. “The narrative of this film demonstrates why the people who race 12mRs are so passionate about the yachts,” said Jobson. “The feeling of sailing a twelve upwind connects sailors to the wind and the water in a way that makes you want to come back.”

America’s Cup, Olympic and World Champions are attracted to the 12 metres for the elite level of racing, the history of the Class and the raw power of the yachts themselves. For three-time Olympic medalist Jesper Bank who helmed Legacy (KZ-5), the attraction to this regatta was Newport and the 12mR history. His fellow Olympic medalist and Kookaburra II (KA-12) helmsman Torben Grael said: “It’s nice to race boats that were in the Cup…they are still very competitive…with many good sailors.”

An Enduring Legacy co-producer, Jamie Hilton added: “It was important for us to document the once-in-a-lifetime gathering of 12 metres at Newport for the 2019 World Championship. Not only did we want to capture the legendary racing fleet in action, but also the voices of the participants— many of whom had raced on the twelves in America’s Cup competition when it was held in Newport between 1958 and 1983. Both American and international sailors were excited to be in Newport and ecstatic to be back on a 12 metre.”

The first day of mark racing got underway today in ORC European Championship 2021 with a fleet of 62 hulls from 12...
Read more
- Advertisment -