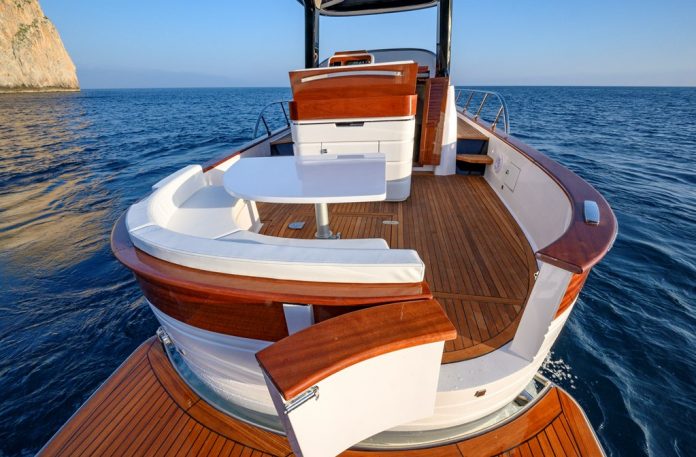 Gozzi Mimì is celebrating the big success of the Libeccio 9.5 Walkaround, of which several units have been sold and many negotiations are underway for deliveries in October 2021. The first unit, belonging to a young Italian boat owner, was recently launched, while many others are being made for customers in the Mediterranean area and Northern Europe.

Designed by Valerio Rivellini and presented at the last Genoa Boat Show, the 9.5 Walkaround offers large outdoor spaces with a central console and a wet bar aft. Below deck is a dinette and a double bed. With its two 200 HP Yanmar engines, the boat reaches a top speed of 27 knots, but can also be equipped with two 230 HP engines to achieve a top speed of 32 knots, or with a single 250 HP engine for a peak speed of 25 knots.

The success continues of Gozzi Mimì’s latest and most modern model: the Libeccio 9.5 Walkaround, designed by Valerio Rivellini and which made its world preview at the last Genoa Boat Show (October 2020). Several units have already been sold and negotiations are underway for many more in the Mediterranean basin, the boatyard’s main market, and in various North-European countries, where Gozzi Mimì is increasingly becoming a symbol of fine boat-building skills combined with the charm of Italian design. The first unit, built for a young Italian owner, brilliantly passed its first sea trial off the island of Capri only recently.

This modern boat, designed for dynamic young people, is at the same time endowed with great elegance and charm. It is the upshot of the success of the previous model, the Libeccio 9.5 Sport, and features a redesigned deck, which better exploits outdoor areas, with a symmetrical central console. The boat integrates a number of innovative solutions, such as the rigid, unbolted canopy supported by just two side arms, which provides shade through the breathable mesh, or the glossy painted mahogany stern bar module with hidden seat, which can also be used as a kitchen unit. The boat is 9.5 metres long and 3 metres wide and the stern section features a comfortable sofa that can be converted into a sundeck and a table for six people, while inside is a large dinette with a double bed and a separate bathroom.

Also available in single-engine version, the boat launched in the stretch of sea between Naples and Capri was powered by a pair of Yanmar 200HP engines, thanks to which she reached a top speed of 27 knots.

High performance is one of the main characteristics of the models built by the Neapolitan boatyard, whose aim is to find the perfect balance between the traditional lines of Campania’s gozzo boats and high-performance, adrenalin-fuelled navigation. The 9.5, which can alternatively be fitted with a single 250 HP engine, is one of the models that best represents this construction philosophy, and the numerous orders recently received well confirm that it has proved worthy of the challenge.

Facebook
Twitter
Pinterest
WhatsApp
Previous articleCompact but capable: Bering Yachts introduces the new B72 explorer
Next articleSailGP is inviting cities to join its Race for the Future

Arc, a startup that launched 10 months ago with ambitions to electrify everything on the water, starting with a limited-edition $300,000 boat,...
Read more
Boating

The Rebel 55 represents the culmination of Christian Grande's stylistic expression to enhance the soul of the Rebel range by Sacs: the...
Read more
Boating

Rio Yachts, historic Italian excellence, in the year of its 60th anniversary presents a novelty in the name of freedom and luxury:...
Read more
- Advertisment -