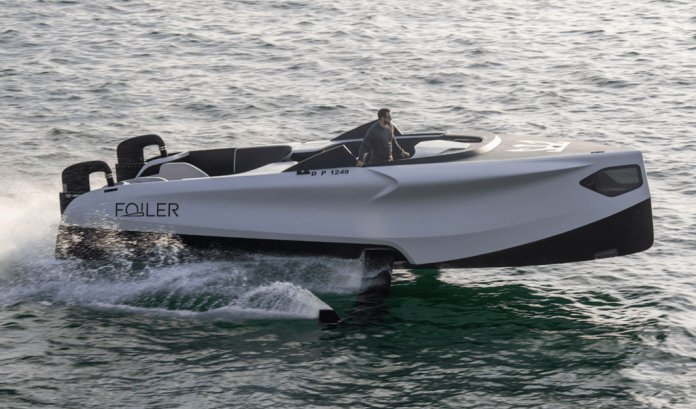 Royalty has a new home above the waves, after Enata launched the latest in its Foiler flying yacht series. Known as the Royale Cabin model, it combines Enata’s world-renowned foiling technology with a luxurious new layout that features a front cabin. Along with a host of other high-end features, the new Foiler is among the most prestigious boats to ride the waves.

In contrast to the more open Venturi model, the Royale Cabin has a cabin up at the bow and luxurious sofa seating at the stern. The roof over the cabin guarantees privacy and discretion without compromising the view out through twin glass windows set into the bulwarks. Naturally there is a fridge and minibar here, and even a bathroom – carefully built into a partition of the cabin.

The line of the cabin roof sweeps smoothly aft, merging with the Wing Hard Top, which protects the helm station. This Royale has been designed for a demanding owner who enjoys driving the boat himself. The intuitive console at the helm is supplemented with a double bench so that the driver can share the delight of piloting this extraordinary craft with family or guests in supreme comfort.

Unique experience of flying
And that driving experience is like nothing else on – or above – the water. Technology developed at ENATA’s aerospace division has given the Foiler the ability to rise and drop gently on and off its foils, as well as banking smoothly in the turn to give those on board the most comfortable possible ride. An astonishing 132 smart sensors constantly monitor everything from foil and rudder trim to engine performance to ensure that you can concentrate on the pure pleasure of helming.

The Foiler’s lightweight full-carbon build and a generous 740hp of twin custom-built V8 diesels give it jaw-dropping performance. The hydrostatic power train can get the boat up to 28 knots in displacement mode, or a thrilling 40 knots flying 1.5m above the waves on its graceful foils. Its light weight means that take-off occurs around 12 knots, and when foiling at 30 knots, the Foiler’s fuel consumption is 2 Liters (0.5 gallons) per Nautical Mile, with a 300L fuel tank (a 600l fuel tank is optional).

Rich options list
Other notable options built into this boat include the anchor system, which drops smoothly out of a hatch under the bow. It means that the anchor is hidden from view during foiling, and below the waterline in displacement mode. There are also underwater lights to give the Foiler real presence at the dock at night, and to make a midnight dip a real thrill.

Of course, being royalty doesn’t mean missing out on the fun. The latest Foiler ships with the ski pole option for waterskiing. The owner also specced a towing point, so that the yacht could be easily paired with a larger mothership. And as a final touch, he chose Foiler’s boarding pole. The boat’s black and white hull with carbon fibre detailing looks sensational.

“We’re thrilled to launch the first Foiler with our magnificent Royale Cabin layout,” says Enata Manager Alois Vieujot. “It offers unparalleled comfort and great privacy, all within the envelope of our proven technical platform. Enata’s aerodynamic and engineering expertise has been fully harnessed by the Foiler to offer a safe, smooth and above all thrilling ride for discerning owners.”

A brand-new category of sporty, comfortable dayboats will hit the water near Piraeus later in April, when Technohull launches its new 7.8m...
Read more
Boating

X Shore, a Swedish brand driving the future of electric, connected and sustainable boating, is making its debut in the United...
Read more
- Advertisment -