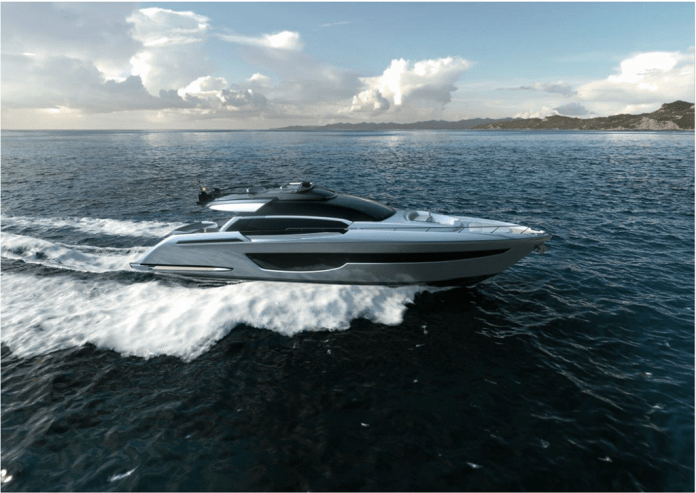 Officina Italiana Design, the Italian studio founded by Mauro Micheli and Sergio Beretta, which is responsible for the exterior lines and interior design of the entire Riva range, has just used its powerful recently-acquired virtual reality system to craft a highly accomplished and fresh new take on the already hugely successful Riva 76’ Perseo Super.

“The new virtual reality software allows us to check every last detail and also perfectly visualise the spaces, lines and proportions in a 1:1 scale as well as move around aboard to check that everything is properly balanced, all of which optimises the design process. The Perseo, an extraordinarily successful Riva yacht clothed in timeless lines, required only a few small modifications to its styling: this great new technology allowed us to improve onboard liveability. Perfecting a success story is a huge challenge but anything is possible thanks to research. The fibreglass yacht’s configuration has not changed but we have given it a refresh and a more contemporary look,” says Mauro Micheli, OID’s Chief Designer.

Subtle modifications were made the Perseo’s design to further underscore the sporty, streamlined aspect of the craft.  The hard top, for instance, is now a darker colour, which accentuates the craft’s aggressive stance.
Some of the styling cues present on the original model’s large windows, a signature feature and the source of the light in its bright interiors, have been removed to create an even more linear look and a cleaner design.

In terms of layout, usability has been significantly improved. The original Perseo had a dinette with table and bench in its aft cockpit. These have now been replaced with a C-shaped sofa and fixed table with room for two further seats. Officina Italiana Design has created a choice of two cockpit versions: the first featuring the dinette close to the living area window and the second with an American-style bar complete with stools.

Up on the fly, instead of the aft-facing C-shaped dinette, there is now a steering position, something owners tend to greatly appreciate, and also two side loungers as well as a bench.

The interior living area, which is incredibly bright thanks to those large windows, has not been changed. However, there is a new console on the steering position trimmed in glossy new rosewood.

The master stateroom was enormous in the original model. By compromising slightly on its size, however, the designers were able to create enough space for a four-cabin layout or, if owners require, a second smaller saloon as a communal area or a dinette. This yields a more liveable, useable space for all the guests aboard, right in the very heart of the boat. Somewhere to have breakfast or simply relax. An added value space that reflects current market demands.

“We did a non-invasive touch-up of the styling. We didn’t want to revolutionise the Perseo by adding new styling cues. We preferred instead to retain its originality and simply freshen up some of its lines and make it a more convivial boat. We didn’t want to change its look and so we did some very subtle work to improve certain aspects and, most of all, to make this the ideal boat for long cruises. A beautiful, liveable place that is as comfortable as a floating home and with just right balances struck,” adds Micheli.

“The Perseo is a bright, stylish boat with a charm all of its own. A yacht that appealed to a certain type of owner: the kind that loves the sea, comfort and wants to stand out from the crowd by sailing aboard a vessel that although medium-sized has exactly the same elegance as a larger yacht. In a word, the new Perseo is a yacht that works right across the board because its proportions are correct, it is a pleasure to be aboard, and is easy to handle. Because today, owners are increasingly wanting their boat to be a safe island. Also because of the need for social distancing, the cabin and the extra space below decks create a sense of greater ease and freedom aboard,” comments Sergio Beretta, CEO of Officina Italiana Design.

Amongst the latest creations to emerge from the Officina Italiana Design studio are the Riva 88’ Folgore and Dolceriva, which hail a new direction for Riva design with new
styling cues. Meanwhile the Bergamo studio also made a spectacular entry to the superyacht sector with the Riva 50 Meters Race (March 2019 Riva 90’ Argo and Riva 110’ Dolcevita). These flanked by the Sanlorenzo 52 Steel Seven Sins (exterior and