When Easter eggs contained a yacht 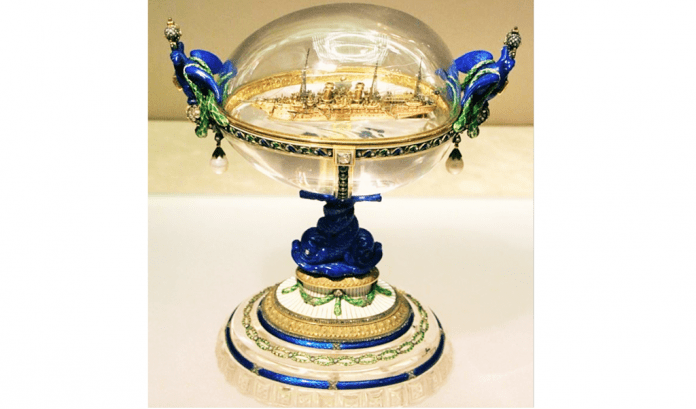 In these Easter holidays, once again in lockdown, with more time to read and document, Artemare Club likes to remember the tradition of Fabergè Easter eggs and in particular of the jeweled egg with the Imperial Yacht Standart, made under the supervision of the Russian jeweler Peter Carl Fabergé in 1909 for Tsar Nicholas II of Russia, as a gift to his wife, Tsarina Alexandra Fyodorovna.

The surprise yacht is a gilded replica made of gold and platinum and covered in glassy enamel that rests on a carved crystal bed representing the ocean. The Standart, 116 meters long for about 5,500 tons was the largest yacht in the world at that time, was commissioned by Tsar Alexander III in Copenhagen and launched in 1895.

Fabergé eggs are fascinating, mysterious objects and exceptional works of art, those in the imperial collection are 52 extremely creative and artistic and were created by Peter Carl Fabergé between 1885 and 1916 for the Russian imperial family, eggs that are famous throughout the world for their artistic expertise, their sumptuousness and their value.

Another naval Fabergè egg from the same collection is the “Memory of Azov” egg that the penultimate Tsar of Russia, Alexander III gave to his wife, Tsarina Marija Fyodorovna in 1891. The shell is made from a single block of heliotrope mottled with red and blue, superimposed on a motif of golden scrolls decorated with glitter and embossed gold flowers, in the Rococo style.

The surprise contained inside is a faithful miniature replica of the armored cruiser of the Russian Imperial Navy “Pamiat ‘Azova”, Memory of Azov, made of red and yellow gold, platinum and small diamonds for the windows, placed on a plate of aquamarine representing the sea. The egg commemorates the trip to the Far East made in 1890 by Tsarevich Nicholas and Grand Duke Georgij of Russia.

The Maison Fabergé, historic Russian jewelry house, was founded in 1842 in St. Petersburg by Gustav Fabergé, due to the clamor of the jewels made, for the notoriety and quality of the workmanship for them, it is probably the most prestigious jewelry manufacturer in the world. world.

In 1924, after the Russian revolution and the forced closure, the company was reconstituted by the sons of Peter Carl Fabergé in Paris with the name of Fabergé & C., but it did not reach the glories received in imperial Russia and closed. Another company, Fabergé Inc., was formed in 1937 in the United States as a cosmetics and perfume company. Since 2012, Fabergé ltd has been part of the Gemfields group. Over time, eggs with surprise yachts have been made different and of different value, all always very beautiful.

In 1893, the physicist Dr Ernst Abbe, a pioneer in the field of optics and a business partner of the German microscope...
Read more
- Advertisment -