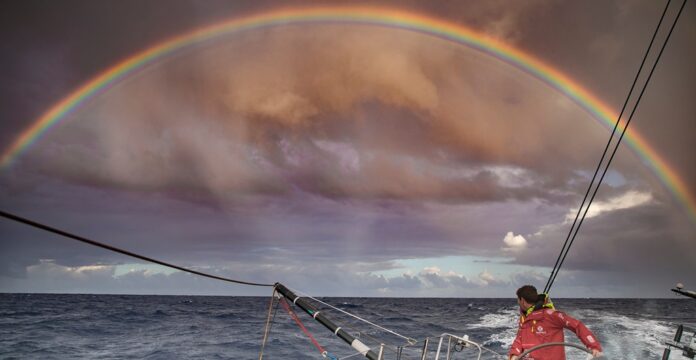 The Ocean Race is aiming to make its next round-the-world race in 2022-23 climate positive. The sailing event, known as the greatest test of a team in sport, is announcing the move as part of an ambitious climate change initiative and a key part of its work to protect and restore the seas.

The initiative tackles the reduction of race-related greenhouse gas emissions (GHGs) alongside a programme of activity designed to create a positive impact. The work doesn’t stop at race-organiser operations; it guides and inspires all those that the Race works with to also become climate positive, including race teams, the cities that host the event, Race partners and official suppliers. It also extends beyond the immediate touchpoints of the Race to reach new audiences, from schoolchildren to policy-makers, in order to drive climate action.

The announcement comes on Earth Day, a global movement to drive positive action for the planet. This year the Day focuses on the climate crisis and environmental destruction and the need to restore the Earth.

Anne-Cécile Turner, Sustainability Director at The Ocean Race said: “Healthy seas are fundamental to all life on earth, but they are at breaking point. We are determined to do all we can to help. It is a huge challenge to become climate positive within the next 18 months, but we have an opportunity to make a significant impact on a global scale and achieving the extraordinary is in our DNA. Sport has the power to accelerate change and we have no time to waste.”

Here are some of the key elements of the programme:

• SCIENCE AT SEA: During The Ocean Race some of the teams capture data about the state of the seas as part of an innovative collaboration between sailors and ocean research organisations. Along with measuring microplastics in the water, boats gather data on CO2, sea surface temperature and salinity – indicators of climate change. CO2 measurements are submitted to the Surface Ocean Carbon Dioxide Atlas (SOCAT), which provides data for the Global Carbon Budget, a yearly assessment of CO2 that informs targets and predictions for carbon reduction. The science programme will be expanded further during the 2022-23 Race, with more boats capturing data from parts of the ocean rarely accessible for scientific research.
• OCEAN GUARDIANS: As well as working with sailors to collect valuable scientific data at sea, The Ocean Race has a dedicated sustainability programme to help teams to reduce their impact. The wide array of initiatives ranges from a requirement for a minimum of 20% of energy on board to be from renewable sources (such as hydro, solar and wind), to climate change training and sustainability guidelines and tools. Sailors are encouraged to become ocean guardians, that not only reduce, measure and offset their impact, but encourage their partners and fans to do the same.
• THE OCEAN RACE SUMMITS: Bringing together global players from the worlds of government, science, industry, NGOs, media and sport, including sailing, The Ocean Race Summits aim to help to drive solutions around some of the major causes of the deterioration of our seas, including climate change. The next in the series, The Ocean Race Summit Europe, takes place in June.
• HOST CITIES: During the Race teams have stopovers at 10 cities across the globe. In each destination a Race Village is created to host teams, hospitality guests and millions of fans. The aim is for all Race Villages to be powered by 100% renewable energy during the next Race and every element on site to be as sustainable as possible. Each city is also encouraged to make commitments and take action on climate and other major issues affecting the ocean.
• CHAMPIONS FOR THE SEA: The Ocean Race’s award-winning learning programme for 6-12 year olds has helped over 160,000 children in more than 54 countries understand one of the main threats to the ocean, plastic pollution, and what can be done to combat it. Next month new resources will be launched that introduce the important role that the ocean plays in our climate.
• INNOVATION WORKSHOPS: The Ocean Race’s Innovation Workshops bring together an expert group to tackle specific challenges that affect competitive sailing and ocean health. As part of this are a series of Sustainable Boat Building workshops to engage the industry to measure CO2 impacts and share best practice to accelerate reduction.
• BLUE CARBON: The Ocean Race is supporting projects that not only capture greenhouse gases, but help to restore ocean ecosystems and provide a habitat for marine life. The projects, which have previously included mangrove restoration in Myanmar, will help to balance the Race’s unavoidable carbon emissions.

As a Race organiser, The Ocean Race will be climate positive by the end of the next Race and will have slashed greenhouse gas emissions by almost half. Being ‘Climate Positive’ means drawing down more GHG emissions than are produced.

The Ocean Race has identified GHG reductions of up to 45% could be achieved in the next race, compared to the 2017-18 race. This would be achieved through efficient event logistics, maximising renewable energy and careful management of resources, including materials, food, waste and water.  The climate positive status will be possible through taking a restorative approach in carbon offsetting more than the GHG footprint, ideally through the emerging blue carbon approach, combined with the cumulative positive impact of the Race’s climate advocacy.

During the last Race, organiser emissions made up a third of the Race’s overall emissions, with the remainder from race teams, partners, and hospitality guests.

Anne-Cécile Turner continues: “For The Ocean Race to become climate positive by 2022-23 we need our racing nations, partners and teams to join us on this journey. Most of these stakeholders are taking positive steps on climate action, and we are on track to achieve our aim. Collaboration is the key to protecting and restoring the ocean. We will continue to seize opportunities to drive action wherever we can.”

The climate initiative supports global commitments and science-based targets to limit global warming to 1.5 degrees, aligned with the Paris Agreement. The Ocean Race has also joined the United Nations Sports for Climate Action initiative, as part of a sports industry collective response and commitment to take action on climate change during a decade of dedicated action to restore the seas.

The Ocean Race’s sustainability programme ‘Racing with Purpose’ is supported and developed in collaboration with Premier Partner 11th Hour Racing.

What do we mean by Climate Positive?

Being ‘Climate Positive’ means drawing down more GHG emissions than we produce. This will be achieved through investment in restoration projects which sequester carbon, enhance biodiversity and are socially beneficial.

The Ocean Race will invest in nature-based solutions, such as seagrass, mangrove and kelp forests as much as possible, supporting a combination of verified offset projects and providing contributions to community-lead restoration and conservation projects.