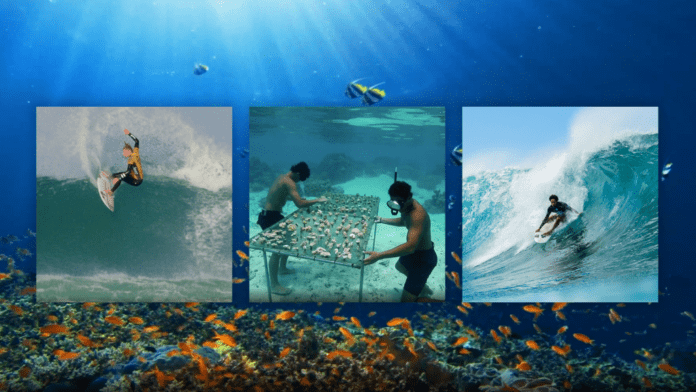 The WSL (World Surf League), the world surf league, recently announced the sending of the petition “We are one ocean” to the United Nations conference on biodiversity, “Kunming China”, calling on world leaders to protect and to conserve 30% of the oceans by 2030. By that date, we want to create a global network of marine protected areas that will cover 30% of the world’s seas – while today they represent just 2.7% – in order to safeguard the ocean health and biodiversity and help combat the effects of climate change.

The WSL had launched the campaign earlier this year with the aim of educating on the issue of ocean conservation, an action also aimed at securing the future of surfing. Oceans for surfers are much more than a favorite place to play, they are their arena, their office and their source of inspiration.

Since the launch of We are one ocean, people from 150 different countries and more than 90 organizations have come together to involve an audience of around 400 million men and women who care about the planet.
Emily Hoffer, WSL Chief People & Purpose Officer, said: “We Are One Ocean offers a great opportunity to give a voice to the global community of surfers and ocean enthusiasts, to world leaders. We know that one way to achieve change can be through communities of enthusiasts, so that they speak as one voice for ocean conservation. The WSL is committed to working both globally and locally to protect and conserve the oceans by investing in young people so they can become their future guardians. “

WSL for this specific environmental initiative has collaborated with nine testimonials from all over the world, including surfing scientists, such as Dr. Cliff Kapono and Dr. Easkey Britton, and champions of the WSL world circuit, surfers such as Kanoa Igarashi and Lakey Peterson, to spread the initiative.
During the competition season, the We are one ocean campaign was complemented by practical activities in favor of the environment, such as beach cleaning, coastal restoration and the preparation of turtle nests, which involved both athletes and the large audience came to applaud them.
Among the 90 organizations and associations worldwide, engaged in the fields of sport, the environment and sustainability, which have joined the WSL initiative, are the Natural Resources Defense Council, Conservation International, Take3, Surfers Against Sewage, I AM WATER, Surfrider Foundation, Sea Legacy, Lonely Whale, PADI and World Sailing.

As part of the “We Are One Ocean” campaign, WSL has launched and founded a new program, which supports ocean conservation work by non-governmental organizations related to the place and communities hosting WSL events, including the SOS Mata Atlântica Foundation , Brazil, WILDCOAST, California, Mālama Pūpūkea-Waimea, Hawaii and WILDOCEANS and South Africa.

Membership of the 2022 program is open. The petition was sent in video form to the United Nations Biodiversity Conference (CBD) and will be screened at the meeting in Kunming, China, which will take place next spring, where the new Post-2020 Global Biodiversity Framework will be presented.

To view the petition link:
https://www.worldsurfleague.com/posts/492300/world-surf-league-delivers-we-are-one-ocean-petition-to-united-nations