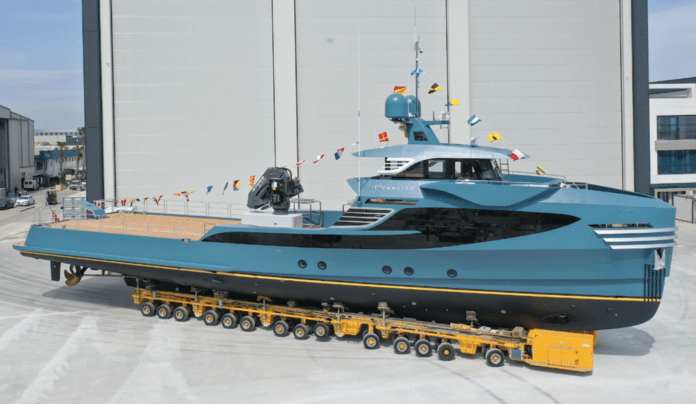 A sleek, muscular new predator has taken to the seas with the launch of a 36m custom support vessel by Alia Yachts. Earlier this month, the Turkish yard painstakingly drove the fully aluminum yacht out of the building halls and lifted it into the water in Antalya using a 200-tonne travel lift.

PHI Phantom, part of the PHI Project, is a superb example of the yard’s metalworking skills, and features striking in-house interior design. Cor D Rover was responsible for her exterior styling, and naval architecture was by Van Oossanen. Destined to support the custom superyacht PHI by Royal Huisman, PHI Phantom reflects many elements of the larger yacht’s design.

“The owner of PHI Phantom is really detail-oriented, and he has been very involved with every element of the build,” says Gökhan Çelik, President of Alia Yachts. “He trusted us to deliver on a demanding brief, but we have certainly matched and, I hope, surpassed his expectations for this unique support vessel. In particular, the aluminium bending and precision welding was a major challenge.”

The hull was to have no fairing to finish it, so the plates had to be very accurately bent in three dimensions, then welded without creating the slightest distortion. It is flawlessly painted in the exactly same matt blue-grey as the mothership. She also shares the horizontal grille work at the bow and echoes the swooping shearline of the larger vessel.

“As far as we’re aware, this is the first support ship that’s been built with shared aesthetic DNA from the mothership,” says owner’s rep and captain of the mothership PHI and skipper of  PHI Phantom Guy Booth, who followed the whole project through to completion. “She looks like a mini PHI; a sibling. The team at Alia have had the opportunity to build something really cool, and the passion from them has been great. They really dig it!”

PHI Phantom is built to cross oceans carrying the tenders and toys that the mothership has no garage to stow. The key here is a 9m HS Marine crane capable of lifting 5.5 tonnes out of the water and onto the vast 150 square-metre aft deck. It has more than enough power to handle the 14m gentleman’s tender currently taking shape at Spirit Yachts, as well as the Axopar 37 Suntop. A hydraulically operated lazarette under the deck stores further toys in a protected environment.

But the boat is also a technical marvel in other respects. Every system is overspecced, so as to be as reliable as possible. From pumps and piping to hydraulics and electrics, everything is designed to be

as bombproof as possible. With a patented Fast Displacement Hull Form by Van Oossanen and twin Cat C-32 engines, PHI Phantom has a range of 4,200 nautical miles at 12 knots cruising speed. Flat out, she’ll do 21 knots to match the slim, easily-driven hull of the mothership.

The interior is designed to be as functional as possible, although finished to superyacht crew standards. There are berths for up to six crew, but the boat is classified for handling by just three. It means that there is extra space on board, and one of the cabins has been designated as a guest cabin, with a little more volume and a desk. “There’s a beautiful galley on board and an enormous crew mess area,” adds Booth.

PHI Phantom is undergoing final sea-trials now and will be delivered to the owner in June.

“When PHI Phantom does begin her adventures, she will represent one of the most robust and stylish support vessels ever built,” says Çelik. “Alia Yachts is incredibly proud to have brought this project to life, which showcases our incredibly high standards of craftsmanship and finish.”

“The yacht is for very experienced repeat clients of mine who have owned several previous yachts, although all of them have been...
Read more
Superyachts

Tankoa Yachts announces the sale of the new first T580

This is the first 58-metre model, a fantastic addition to the fleet of the Italian shipyard. The hull will be built in...
Read more
Superyachts

This is the second yacht sold in Spring 2021 by the Dutch shipyard. Project Gemini’s construction was started as a speculative venture,...
Read more
Superyachts

Lürssen is proud to announce the successful launching of project 13800 on April 29, 2021. Her delivery is planned for summer 2021...
Read more
Superyachts

Sanlorenzo Yachts: delivers the first unit of the 62Steel

Heesen is delighted to announce the delivery of Moskito, YN 19255, previously known as Project Pollux. At 55 metres with a Gross...
Read more
- Advertisment -