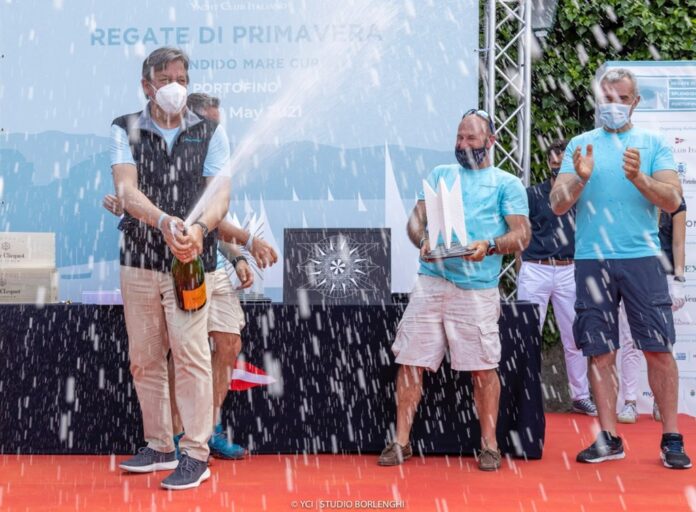 A day with little wind but plenty of sun, with the boats waiting on the water until 2 PM when a long blast from the horn of the committee boat sent the maxis back to port. So the results are the same as yesterday’s rankings after four days with extremely varying weather conditions: from 25 kn and rough seas for the first race to the summery conditions today.

“I dedicate the victory in these races,” said Capricorno’s Alessandro Del Bono back in port, “to Portofino and to my crew. We’ve been sailing together for ages and once again we have shown the value of a yacht that is still very fast.” Built as a racing yacht by McConaghy in 1995 to a design by Reichel Pugh, Capricorno is one of the most successful boats of the past 20 years. Among the brilliant results of this 25 m yacht, victory in the 2006 ARC (Atlantic Rally for Cruiser) setting a record that stood through to the last edition in 2013 with a time of 11g5h32minuti. She also won the Sydney to Hobart and the Cape Town-Rio with her own whose voyage throughout the world, from Patagonia to Cape Horn, from Polynesia to Australia.

Behind Capricorno, the fast Mylius 80 Twin Soul B, the flagship of the Mylius yard that put up an excellent show against pure racing yachts such as Capricorno and Pendragon. Helming Twin Soul B was the owner of the yard Luciano Gandini, ably assisted on tactics by Gigio Russo and a reliable and tightly knit crew.

“We are very satisfied not just by the results obtained by our yachts and their crews after a year-and-a-half of stop because of the pandemic,” said Valentina Gandini, Ceo of Mylius, “but also by the general climate of this first restart for the sector. We hope that the performance of Mylius and the overall spirit with which all the yards, owners, organisation and partners have handled the occasion is a good omen for increasingly consolidating participation in collaboration with the Splendido Mare Cup and more generally for the new season of yachting.”

Third in the rankings, Carlo Alberini’s Pendragon of the Lightbay Sailing Team, another thoroughbred designed by Laurie Davidson, one of the best-known and successful yacht designers of New Zealand. In the waters off Portofino Pendragon could count on the talent of Lorenzo Bodini and Slovenian champion Branko Brcin.
“On the eve of this wonderful event, well organised by the Yacht Club Italiano, I would never have thought of aspiring to a leading position,” says Carlo Alberini, leader of the Lightbay Sailing Team. “Although I had unshakeable confidence in my crew, I realised that because of the pandemic we hadn’t had the hours of training we would have wished: yachts like Pendragon are very complex and getting the best out of them is not easy or to be taken for granted. It’s no accident that today, although I knew it meant risking third place, I would have liked to race, but at no time did the breeze give the idea it would cover the course effectively. We say goodbye to Portofino with a smile on our lips, hoping for a repeat in Naples, where next weekend will take part in the Regata dei Tre Golfi, a 150 mile race round the Gulf of Naples.”

On the prizegiving platform, owners received a valuable silkscreen print by maestro Marcello Morandini, printed by Rinaldo Rossi, and it was again Morandini who designed the YCI Challenge Trophy. There were also special prizes for the best placed member of the International Maxi Association (Pendragon – Carlo Alberini) and of the YCI (Itacentodue – Adriano Calvini).

Success on the water, but also on dry land: in the number of people present in the elegantly decorated lounge in the town and in terms of safety – more than 1700 tampons were administered. Guests and crews then brought to life the area well decorated by Loro Piana in the Piazzetta, by Banca Passadore with its terrace facing the bay and by Rolex, with a privileged view of the crews in what is habitually the suggestive area of the Yacht Club Italiano, showing the strengths of the winning binomial that has long united the two realities. Then in the evening, lights and music in the Piazzetta, perfectly organised by the staff of the Splendido Mare, a Belmond Hotel, Portofino mixed with the clinking of glasses filled with the vintage bubbles of Veuve Clicquot. There was an air of magic in this long week of races, confirming them as a fixed and continuing date in the crowded sporting calendar.

Official tenders of the Regate di Primavera – Splendido Mare Cup were the two iconic models of the Wallytender line: 43wallytender and 48wallytender. The boats were made available by Wally as shuttles for the guests of organisers and sponsors.

The Regate di Primavera – Splendido Mare Cup came to an end with the big maxis who bid arrivederci to Portofino as they left the port with blasts on their sirens.