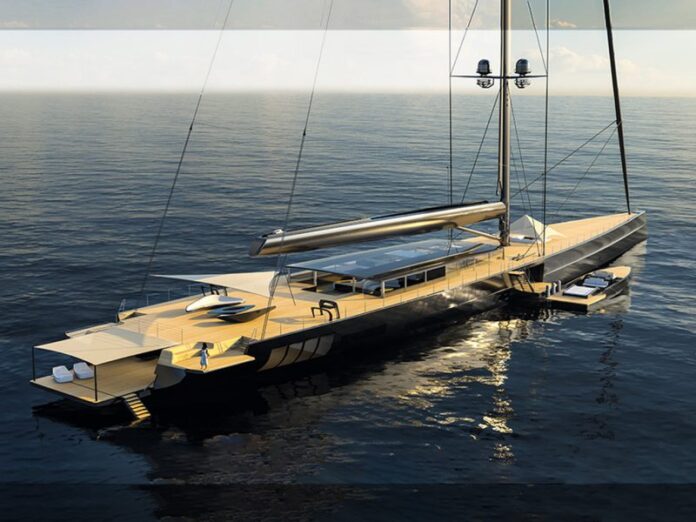 With a mast taller than the Statue of Liberty, the latest ship from Royal Huisman is destined to go down in the Guinness World Records. But it is also built for sailing and for living on board for long periods at a time

“IF YOU CAN DREAM IT, WE CAN BUILD IT”. This has always been the Dutch yard’s motto and it was really applied to the full in its latest project, developed in partnership with Malcolm McKeon. The reason is fairly obvious and can be summed up in a number, which is higher than any other. The mast of the Apex 850 will be 107 metres high.

The hull is aluminium, while the mast and boom are made of carbon. The rigging is incorporated into an authentic system developed by Rondal.

Just to give you an idea of the size, it’s worth remembering that the Statue of Liberty in New York is “only” 93 metres high, pedestal included. Once its construction has been completed and it has been launched, if the Apex 850 were to sail between the mouth of the River Hudson and Manhattan Bay it could even hide the symbol of New York from sight. The height of the mast is not the only number to give an idea of the amazing feat achieved by the yard and the designer. The overall length of the hull is 85 metres, which will also go down in the Guinness World Records as the longest sloop in the world. The hull will be made from aluminium, the equipment will be developed by Rondal, the sail area will be 4,700 m2 and the cockpit will occupy around 200 m2. In practical terms, the cockpit alone is a penthouse on the sea. However, these stratospheric figures should not be deceiving. Malcolm McKeon has not developed a project that is only surprising in terms of its dimensions.

What is really striking when observing the rendering and when reading the technical specifications that have been provided so far, is that this sloop has been designed for actual sailing. The yard expects performances of well over 20 knots under sail, which should be easy to achieve. Furthermore, it expects the vessel to be easy to handle and steer.

The two rudder wheels, which are very particular and original in terms of their design, also serve to make manoeuvring easier and smoother. To cite McKeon: «This is precisely the purpose of the design. It’s not just good to look at, but to be functional too».

In short, the design is not only something to be admired visually, something eye-catching, but also something that serves a purpose, which often means simplifying an operation. In this sense, we can confidently say that Royal Huisman and McKeon have interpreted the very essence of design. It is easy to imagine that it will be packed with technology and engineering.

According to Jan Timmerman, CEO of Royal Huisman: «Apex 850 is a challenge that we have accepted. Moreover, two of the world’s biggest sailing boats (Athena and Sea Eagle II, ed.) were built by us».

The retractable keel has been designed to optimise weights and the listing angle. A restricted listing angle will guarantee stability, comfort and safety when sailing. No foils, no appendices, everything characterised by simplicity to avoid complicated maintenance operations.

The mast will be 107 metres high. The Statue of Liberty, pedestal included, stops at 93 metres. The mainsail can be rolled up in the boom and is designed to be hoisted quickly. The total sail area under the wind is 4,700 m2, while when the Apex is against the wind, the surface area is 3,200 m2.

Apex 850 has to be able to sail free from problems and obstructions. The mainsail and genoa have also been designed to be easily hoisted and the helm has a system that resembles a drive-by-wire, which we could describe as a sail-by-wire in this case. This has also been designed to simplify life at the helm and ensure a prompt manoeuvring response.

The engine room alone could be the subject of a degree thesis. One of the most noteworthy aspects seems to be the system that makes it possible to store energy. This trend is now widespread in giga sailing yachts and “recuperates” that energy that can be produced when sailing. There are three retractable thrusters that, when immersed, almost reach the draught of the retractable keel, that is to say 8.5 metres. And then there’s a system for storing and conserving the energy that they produce. A method has also been developed for limiting consumption, exhaust fumes and noise, particularly at night.

Twelve guests in five cabins, which could perhaps be better described as suites, and a master cabin that measures 250 m2. The crew will be made up of fourteen people with ten cabins between them.

The interiors and deck have huge spaces available, but they also seem to have been developed to ensure comfort when travelling. It’s not just a question of large spaces, but also surfaces designed for spending lots of time aboard. The stern swim platform is one of the many illustrations of this concept. The tenders, garages and platforms have all been conceived to foster the relationship with the sea. Despite its gigantic size, the Apex 850 will not be a mountain to scale, but an immersed ship, surrounded by its natural element: water.

Apex 850is a challenge that we have accepted. Moreover, two of the world’s biggest sailing boats(Athena and Sea Eagle II, ed.) were built by us». Jan Timmerman

The new SW105GT Taniwha set off on her maiden voyage

After extensive sea trials, the new SW105GT Taniwha has set off on her maiden voyage, heading for the Mediterranean Sea. An experienced...
Read more
Sailing Yachts

Y Yachts is "buzzing" this spring. After handing over the Y8 "Vegas Baby" to her owner, the shipyard founded by sailing legend...
Read more
Sailing Yachts

One of X-Yachts’ most popular models throughout history, the X4.3, is going through a serious makeover process. This boat was the first...
Read more
Sailing Yachts

The form and styling of the Hylas 57 is for sure a head turner. Its flowing lines, integrated hardtop with extending awning,...
Read more
Sailing Yachts

Some sailors’ lifetime goal is to cruise around the world. Others have a burning ambition to win the world’s major regattas. If...
Read more
Sailing Yachts

Baltic 68 Café Racer offers ease of use, style and sustainability