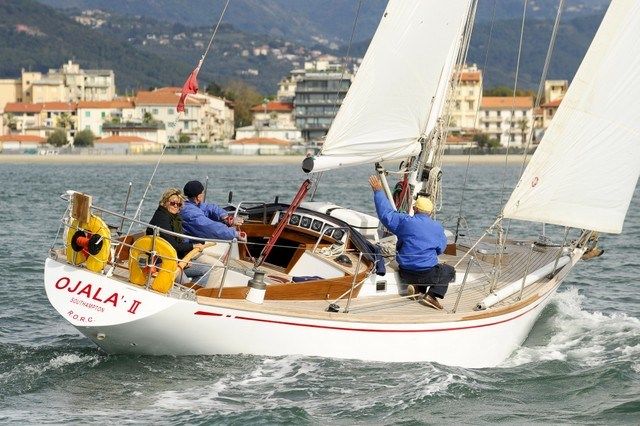 Four refitted classic sailboats, all designed over the past half century by the legendary New York-based naval design firm Sparkman & Stephens. This is what has recently happened at the Pezzini shipyard in Viareggio, Italy, a historic yacht shipyard founded in Tuscany in 1905. The boats are Ojalà II (1973), built in aluminum, the classic S&S Swan, fiberglass made, Black Tie (1981) and Vanessa (1985) and, finally, the wooden Mait II (1957). It is the demonstration of the complete variety, in the shipyard skills, able to intervene on all types of materials with which the boats are built.

Ojalà II, purebreds racing boat
Ojalà II is a Marconi sloop, one tonner IOR, 11.54 meter long, built in aluminum in 1973 by the dutch Royal Huisman shipyard, designed by Sparkman & Stephens . Every year, since 2009, the Pezzini Shipyard takes care of her ordinary and extraordinary maintenance. The boat belongs, from the launch day, to the Holland family, founder and owner, since 1950 of Amplifon an Italy-based company active in the hearing care retail market. In her life, she has participated in countless regattas, including the Fastnet Race, the 1973 One Ton Cup , 4 times at the Middle Sea Race (1979-2013-2015-2017), many editions of the Giraglia , of the Mediterranean Championships, the “Settimana delle Bocche”, the Alassio Sailing Week, and 7 CIM/Panerai Trophy,  reserved to vintage and classic boats . In 1977 she crossed the Atlantic Ocean and re-crossed it back to Europe, the following year. Since the end of the 80s, the boat has always been looked after, coordinated and skippered by Michele Frova, born in 1953, a Milanese sailor, close friend of the Holland family, former company manager in the hardware market. In the past 12 years the boat has been present on the course line of at least 150 races . Only in 2018 , in addition to winning the Livorno International Sailing Week, the Argentario Week and the Naples Week,  she got on the podium in all the races in which she participated, and she was awarded the cups AIVE of Tirreno and the Sparkman & Stephens Trophy.

The stage refitting process of Ojalà II
2009 was the beginning of the rebirth of Ojalà II. Pezzini Shipyard dismantled the original teak slats deck, 45 mm wide and 12 mm thick, screwed onto a mahogany marine plywood support, in turn bolted to a network of aluminum beams. Subsequently, the superstructure and the toe rail were sandblasted at the points of attachment and welding of the new 5 mm thick aluminum panels, cut and prepared for their welding to the existing beams. The process kept on by leveling the new aluminum surface with epoxy fillers and ended with  the laying, with polyurethane glue, of the new deck, made up of teak slats, 12 millimeters thick and  more than 5 meters long. In 2013 the whole electrical system has been renovated, in 2015 was installed a new engine Volvo Penta D2-55 – 55 HP, (which improved by 1 knot the cruising speed), in 2017 the galley and chart table areas have been completely and faithfully rebuilt in teak wood and the boat floor has been replaced. In 2019, after more than 200,000 sea miles , the old 14.75 meter long Sparlight aluminum mast was replaced by a new one, with two rows spreaders, made by Franco ‘Ciccio’ Manzoli ‘s Velscaf, with a classic aluminum profile and rod riggings. Also that year the first sanding of the Ojalà II bridge was carried out.

The sails wardrobe
The current dacron and nylon sail set of Ojalà II consist of about 25, made from 2009 to today, allowing her to compete indifferently with her IRC , ORC or CIM certificates. In 2009, Guido Cavalazzi got onboard Ojala II, as sails designer and crew member. Guido Cavalazzi, close friend, since his youth, of the team manager Michele Frova, is Senior Designer Consultant, in the classic area, at North Sails. He has been the sail designer and sailmaker of all the Italian campaigns at the America’s Cup, for Azzurra , Il Moro di Venezia and Luna Rossa up to the Valencia edition. In particular, for Il Moro, in March 1992, Cavalazzi designed and produced the very first carbon laminate genoa, and mainsail, ever made in the world’s sails history. Those sails have been manufactured in San Diego, utilising raw material worked out in Italy, by Montedison.