Home Boating Fulgura I promises to break the world record for the fastest electric...
Boating 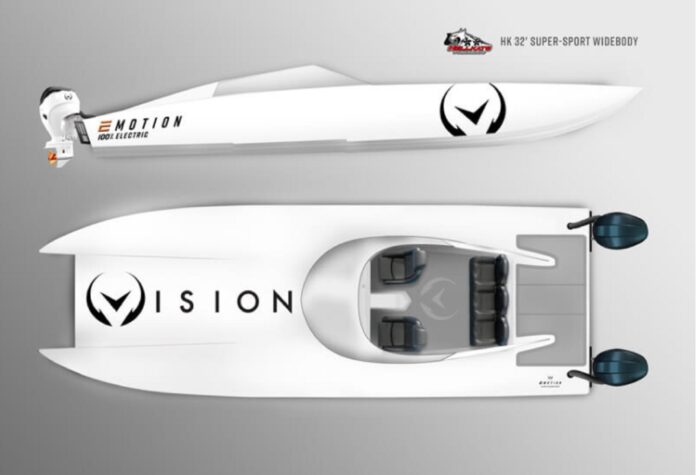 Canadian engine manufacturer Vision Marine makes some of the most powerful electric outboard engines in the world and now wants to use them on what could be the fastest electric boat on the planet.

According to a recent announcement, Vision Marine Technologies recently partnered with boatbuilder Hellkats Powerboats, a company that holds the record for making the fastest 30’ / 44” Small Tunnel Catamaran in 2020, running at over 124 mph (almost 200 kph).

The two companies want to take a shot at breaking the world record for the fastest electric boat, which is currently set at 88 mph (approximately 141 kph).

Vision Marine will bring to the table its proprietary technology and equip a Hellkats 32 ft. (9.8 m) Super-Sport Widebody Catamaran with two of its E-Motion 180E electric outboard engines. The company claims its E-Motion 180E is the most powerful electric outboard engine in the world, packing 180 HP and a 60 kWh lithium battery. It has an estimated range of 70 miles (112 km) at a cruising speed of 20 mph (32 kph). However, these figures depend on several factors such as the design and weight of the boat, weather, and more.

The world-breaking record catamaran will be called Fulgura I, and it is estimated to reach speeds of up to 100 mph (161 kph), which will definitely break the 88 mph (141 kph) record set in 2018 by the Jaguar Vector Racing.

The Fulgura I will be auctioned off after the event and all the profits will go to charities involved in cleaning up the global waterways. The Fulgura I boat will go to water this November and the entire process will be documented by Center Console Only (CCO), a renowned name in the boat selling industry.

Meanwhile, the E-Motion 180E electric outboard engine from Vision Marine is available to order, with a full package setting you back $78,990. The package includes the $26,995 motor and the $51,995 battery, with charger and the user interface kit.