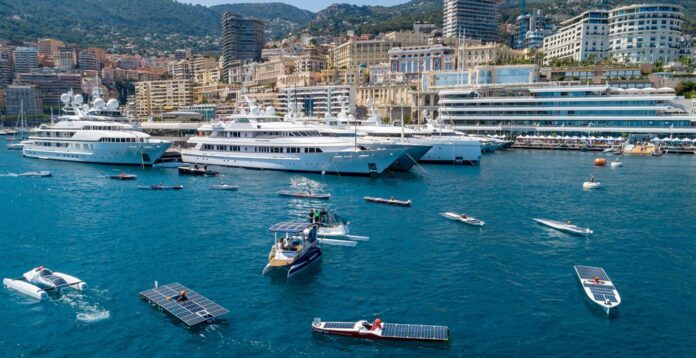 Eight years on and the annual Monaco Energy Boat Challenge has established itself as the big meeting for alternative greener propulsion systems, ranging from electricity to solar via the lesser known hydrogen, all of which take centre stage at the 8th Monaco Energy Boat Challenge (6-10 July 2021). Organised by Yacht Club de Monaco alongside the Prince Albert II of Monaco Foundation and International Powerboating Federation, this edition is supported by long-term partners Iqos and Credit Suisse, joined for the second year running by BMW and YPI (Yachting Partners International). A truly unique event it combines what amounts to sea trials for participants at sea and meetings ashore at a full-day conference, daily Tech Talks, round tables and an exhibitors’ village open to the public.

Series of challenges at sea – R&D progress talks ashore
For the 32 teams, including 22 universities, representing 17 nationalities, there will be plenty of opportunities to put their boatsthrough their paces on the sea in contests organised during the three days and visible from the Solarium of the main harbour wall (entry free to the public). A parade, sea trials, speed record, fleet race, 16-nautical-mile race round marks on a Monaco-Ventimiglia-Monaco course, endurance laps, manoeuvrability challenge and a slalom event add up to an allencompassing programme for competitors coming from Italy, France, Netherlands, Monaco, Portugal, Greece, Germany, Sweden, Switzerland, Hungary, Croatia, Poland and the United Arab Emirates. Other teams are having to participate online such as China, Peru, South Africa and Indonesia, due to travel restrictions, and will be present for the Tech Talks.

On Thursday 8th July, the theme of a full-day conference is Energy transition, alternative solutions, reflections and sustainable initiatives in the yachting sector. Experts will be coming to talk about progress made in a whole range of aspects from bio-composite development in yachting to new energy sources, alternative propulsion systems, sustainable initiatives in the sector, design and construction efficiencies, and the latest advances in R&D.

Three specific categories
With 16 teams including 11 in Monaco for the fourth year since the Energy Class was introduced, contestants in this category are required to use a pre-set amount of energy to optimise the performance of their catamaran, each having been given exactly the same model by the YCM. And they can use any of the new alternative energy sources. On the other hand, in at the start from the first edition in 2014, the Solar Class is for boats powered only by the sun. As for the Open Sea category, this is mainly open to vessels already on the market or about to enter it for which this event is an excellent opportunity to demonstrate how they perform on the sea. It is in effect like a sea trial for these boats.

In competition for this category, the Lanéva Boats team will introduce its Vesper 001 project. This is a 100% electric ecodesign boat using renewable materials. The prototype takes up to eight people and can reach speeds topping 30 knots. Two years after the launch of their first boat attended by HSH Prince Albert II of Monaco, the four founders received further recognition on 6th May this year when they were presented with the Efficient Solution Label by Bertrand Piccard from Solar Impulse Solution at the Ever trade show. Also present is the Monegasque Vita Yachtsteam, here to unveil their 10m Vita X electric powerboat which has 235kWh of compact liquid-cooled lithium battery storage.

The Swedish Candela team and their C-7, capable of maintaining a maximum speed of 30 knots for more than an hour, will be on the start for many of the events in their category with this fully electric outboard engine combining a powerful battery with an advanced hydrofoil system that lifts the hull right out of the water, reducing drag by 80%. Having already on 22nd September 2020 been here for the Monaco Capital of Yachting Experience, the 12m HYNOVA 40 tender from Hynova Yacht will be on the start of the sea trials. With capacity for 12 people and equipped with two electric engines powered by a hydrogen-electric hybrid system, this boat will end its Sea Show dedicated to hydrogen in Monaco.

Deemed to be clean and sustainable, hydrogen has also been chosen this year by Dutch TU Delft who have dedicated a whole year to designing, building and competing with their entry. Indeed, hydrogen is an energy with a future in the maritime transport revolution. YCM, in partnership with the Prince Albert II Foundation and Mission for the Energy Transition Monaco is organising a second round table of the Monaco Hydrogen Working Group on Friday 9th July, an initiative that brings together institutions and hydrogen technology leaders to discuss how to apply it in their sectors.

Exhibitors village throughout the event
Open to the public, the village welcomes exhibitors and start-ups keen to unveil their solutions, like the Aquon One an autonomous solar catamaran built by Swiss Sustainable Yachts AG which produces its own renewable energy onboard and stores it in the form of green hydrogen. Still in the catamaran category, Neocean are presenting the Overboat, a foiling, electric, automatic and eco-friendly boat.

In the same vein, NepTech will be giving an update on its fleet of new generation 12-24m catamarans that can take up to 150 passengers or 20 tonnes of merchandise. Their concept combines hi-tech engineering, shipping expertise and ecodesign techniques. Meanwhile, the Gerrisboats team have been working on an innovative hull that adapts to the sailing conditions to minimise drag and optimise efficiency. Depending on speed, Gerrisboats hulls change to become as efficient as possible which helps increase their electric-power autonomy.

Biomimetic electric propulsion will also be there in the shape of the FinX system which replaces conventional propellors with an undulating membrane that can save up to 30% on energy consumption compared to ordinary propellors. And alongside Deepspeed, which has developed an efficient, clean and propellor-free propulsion concept, Ameryachts has put together a team whose mission is to build a 60-seat zero emission vessel that is safe for marine fauna. Designed to take marine biologists and students, the intention is to use it to study whales in the Pelagos Sanctuary. And in the solar field, Solbian will be showing its flexible solar panels of photovoltaic cells inter-locked between polymer layers, while Alva Yachts is set to unveil its Ocean Eco 90, a luxury yacht with over 200m2 of solar panels.

Electric Dynamic Nautics (EDYN) focuses on electric propulsion systems for different power-levels and sizes of boat that can be adapted to lakes, rivers and even the open sea. For its part, Sunwave is introducing the FSH 200, a revolutionary electric boat. Equipped with variable buoyancy technology, it incorporates a removable multi-energy module so an H2 generator can be included. Also on display, Seabubbles designs and builds electric foiling boats to carry passengers on waterways in an urban environment. It integrates cutting edge technologies for onboard energy and navigational stability.

Hydrogen is at the heart of research by H2SYS which specialises in hydrogen generator sets and fuel cells capable of delivering from 500W to 3.5kW DC. Equipped with an installation scale, a user interface and communication cards, data can be monitored and registered in real time.

VEBRAT designs and manufacturers powerful electric engines and its own batteries for everyday boats and tenders for yachts and superyachts. Their latest concept is an outboard engine with a horse power rating currently not available on the market. In the same field, Zodiac Nautic in collaboration with Torqeedo is developing the eJET 450, a 50kW Deep Blue electric engine partnered with the latest generation 40kWh car battery (BMW). The new engine provides an autonomy up to 90 minutes at 24 knots and eight hours at 5 knots.

As well as competing in the Energy Class, SBM Offshore is showing a demonstrator floating pontoon that produces green hydrogen from renewable energy, namely solar via solar panels and hydraulic energy via a tidal turbine. Also in the village will be Dinsdale Watersports who distribute the semi-rigid Tornado 6.0m ZERO-E / Torqeedo Deep Blue and will have a test boat in the YCM Marina. Then there is SDS – The Sustainable Design School, an international higher education establishment dedicated to sustainable design and innovation. And finally, Elemoove which is bringing its

Electric Water bikes for people to test in the Marina.
With the Monaco Energy Boat Challenge, YCM is playing its part in taking on the energy and environmental challenges of our time by promoting innovative sustainable solutions to make boats and yachting in general greener and cleaner.